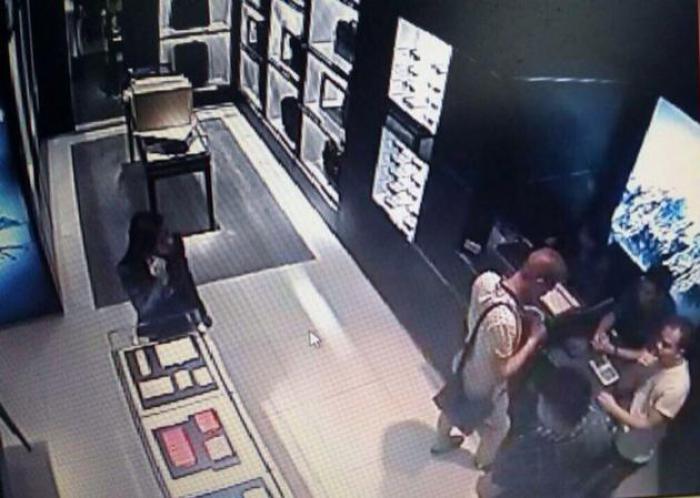 The stolen item is the Villeret Bi-Cylindrique Tourbillon Model Number 106494. Its price tag is very high partly because there are only eight such timepieces in the world, and just one in Thailand.

“Their flight landed in Thailand very early on April 15 and they flew out of the country at 7.30pm on the same day,” Panu said.

Security guards at Gaysorn Plaza told police at 3.15pm on Tuesday that three men, who looked Chinese, had stolen an expensive wristwatch from the Mont Blanc boutique.

“They should be in their 40s or 50s. They spoke Chinese,” a sales assistant said.

Based on closed-circuit TV images, the suspects have been identified as Fajun He, Shaohua Ye and Zhenzu Wu.

“We will coordinate with the Chinese Embassy in requesting that these suspects are sent back to Thailand,” Panu said.

Panu said the Immigration Bureau had blacklisted the men and police were in the process of obtaining arrest warrants.

PHUKET: In a rare and potentially controversial move, the government’s Centre for the Administration of Peace and Order yesterday asked the Constitutional Court and the National Anti-Corruption Commission not to exceed their authority in cases against Prime Minister Yingluck Shinawatra.

CAPO also expressed concern that there could be bias and “double standards” against the prime minister in those cases, warning that such a practice could lead to violence.

The NACC is pursuing a case in which the prime minister is accused of dereliction of duty in connection with the loss-making and corruption-plagued rice price-pledging scheme.

The Constitutional Court is hearing a case in which the prime minister is accused of misconduct for removing National Security Council secretary-general Thawil Pliensri.

In its “statement number 1”, CAPO said the court had no authority to oust the Cabinet if it ruled against the prime minister in the case of the unlawful transfer of the NSC chief.

Tarit Pengdith, CAPO secretary and Department of Special Investigations director-general, read the statement and said it was issued after a CAPO meeting chaired by Labour Minister and CAPO chief Chalerm Yoobamrung.

Tarit said the Constitution allowed the court to oust only the prime minister if it ruled that her order to remove Thawil was unconstitutional.

He said the court had no authority to oust the Cabinet because Article 181 of the Constitution would require the Cabinet to become the caretaker government if the prime minister were disqualified.

He said if the court removed the Cabinet, the government should invoke Article 7 of the Constitution and ask His Majesty the King whether it should continue running the country as the caretaker administration.

CAPO urged the Election Commission to hold a new general election as soon as possible, after the February 2 election was voided by the Constitutional Court.

The court said the election was not organised on the same day for the entire country as required by the Constitution.

It called on prospective participants of the rallies to also have a rethink.

Last week, CAPO issued a statement critical of senior bureaucrats who welcomed leaders of the PDRC to their ministries.

The centre was set up last November to enforce the Internal Security Act after the anti-government rally gained ground following the government-backed bill for blanket amnesty passed the House of Representatives.

Constitutional Court secretary-general Chaowana Traimas responded by saying the court had been fair to all parties involved throughout the 16 years of its existence.

He said the court strictly referred to the law and had no policy of taking into consideration possible political consequences when dealing with cases.

The Democrat Party will consider legal action against CAPO for sedition for what it regards as denying the authority of the Constitutional Court and the NACC, party spokesman Chavanond Intarakomalyasut said.

He also said it was improper for CAPO to suggest that the Cabinet seek a royal judgement on its status should Yingluck need to step down.

Yingluck yesterday requested a postponement of her testimony over her alleged violation of the constitution over Thawil’s transfer.

Constitutional Court spokesman Pimol Thammapitakpong said Yingluck’s lawyer submitted a petition with the court requesting her defence statement be postponed 15 days from April 18 – the deadline for her to submit her defence.

In requesting the delay, Yingluck said she needed more time to prepare documentation as she had to make copies of Supreme Administrative Court documents and the court was closed for the long Songkran holiday.

UDD leaders have announced the cancellation of a mass rally on Aksa Road scheduled for today, saying they wanted to wait on further political developments. They told their red-shirt supporters to be prepared for the next call to rally.

Suspected Hezbollah agent to be sent back to Lebanon: Chalerm
The Nation / Phuket Gazette

PHUKET: The three suspected foreign terrorists held for questioning regarding their possible involvement with the Islamist Hezbollah militant group will be deported back to Lebanon.

The three suspects – identified as Daud Farhat, Yousef Ayyad and Bailal Bahsoun – were held after their plane landed at Suvarnabhumi Airport. Centre for the Administration of Peace and Order director Chalerm Yoobamrung said the men had come to Thailand to spy on Israelis. Deputy National Police chief General Worapong Chewprecha said police had interrogated the men to find out how many people were taking part in the operation and who else was involved.

PHUKET: There were 277 deaths and 2,926 injuries in 2,754 road accidents nationwide in the first six days of Songkran.