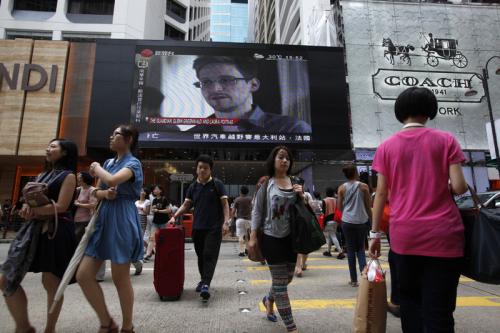 In a major embarrassment for the Obama administration, an aircraft thought to have been carrying Snowden landed in Moscow, and the anti-secrecy group WikiLeaks said he was “bound for the Republic of Ecuador via a safe route for the purposes of asylum.”

Ecuador has been sheltering WikiLeaks’ founder Julian Assange at its London embassy for the past year, and Ecuador’s ambassador to Russia said he expected to meet Snowden in Moscow on Sunday.

Snowden, who worked for the U.S. National Security Agency in Hawaii, had been hiding in the former British colony, which returned to China in 1997, since leaking details about U.S. surveillance activities at home and abroad to news media.

U.S. authorities had said only on Saturday they were optimistic Hong Kong would cooperate over Snowden.

Earlier on Sunday, a source at the Russian airline Aeroflot said Snowden would fly on from Moscow within 24 hours to Cuba, although that source said he planned to go on to Venezuela. The chief of Cuba’s International Press Center, Gustavo Machin, said he had no such information though pro-government bloggers heaped praise on Snowden and condemned U.S. spying activity.

Venezuela, Cuba and Ecuador are all members of the ALBA bloc, an alliance of leftist governments in Latin America that pride themselves on their “anti-imperialist” credentials.

Ecuadorean Ambassador Patricio Alberto Chavez Zavala told reporters at a Moscow airport hotel that he would hold talks with Snowden and Sarah Harrison, a WikiLeaks representative.

Influential Democratic Senator Charles Schumer charged that Russian President Vladimir Putin likely knew and approved of Snowden’s flight to Russia and thought Beijing was involved. He said that will “have serious consequences” for a U.S.-Russian relationship already strained over Syria and human rights.

“Putin always seems almost eager to stick a finger in the eye of the United States – whether it is Syria, Iran and now of course with Snowden,” Schumer told CNN’s “State of the Union.”

“It remains to be seen how much influence Beijing had on Hong Kong,” he said. “As you know, they coordinate their foreign policies and I have a feeling that the hand of Beijing was involved here.”

In their statement announcing Snowden’s departure, the Hong Kong authorities said they were seeking clarification from Washington about reports of U.S. spying on government computers in the territory.

The Obama administration has previously painted the United States as a victim of Chinese government computer hacking.

At a summit earlier this month, Obama called on his Chinese counterpart Xi Jinping to acknowledge the threat posed by “cyber-enabled espionage” against the United States and to investigate the problem. Obama also met Putin in Northern Ireland last week.

A spokesman for the Hong Kong government said it had allowed the departure of Snowden – considered a whistleblower by his critics and a criminal or even a traitor by his critics – as the U.S. request for his arrest did not comply with the law.

In Washington, a Justice Department official said it would seek cooperation with countries Snowden may try to go to and sources familiar with the issue said Washington had revoked Snowden’s U.S. passport. State Department spokeswoman Jen Psaki said revoking the passport of someone under a felony arrest warrant was routine. “Such a revocation does not affect citizenship status,” she said.

“It’s a shocker,” Simon Young, a law professor with Hong Kong University said of the case. “I thought he was going to stay and fight it out. The U.S. government will be irate.”

The issue has been a major distraction for Obama, who has found his domestic and international policy agenda sidelined as he has scrambled to deflect accusations that U.S. surveillance practices violate privacy protections and civil rights. The president has maintained that the measures have been necessary to thwart attacks on the United States.

The White House had no immediate comment on Sunday’s developments.

WikiLeaks said Snowden was accompanied by diplomats and that Harrison, a British legal researcher working for WikiLeaks, was “accompanying Mr Snowden in his passage to safety.”

“The WikiLeaks legal team and I are interested in preserving Mr Snowden’s rights and protecting him as a person,” former Spanish judge Baltasar Garzon, legal director of WikiLeaks and lawyer for Assange, said in a statement.

“What is being done to Mr Snowden and to Mr Julian Assange – for making or facilitating disclosures in the public interest – is an assault against the people.”

Assange, an Australian, said last week he would not leave the sanctuary of Ecuador’s London embassy even if Sweden stopped pursuing sexual assault claims against him because he feared arrest on the orders of the United States.

The latest drama coincides with the court martial of Bradley Manning, a U.S. soldier accused of providing reams of classified documents to WikiLeaks, which Assange began releasing on the Internet in 2010, and, according to some critics, put its national security and people’s lives at risk.

A spokesman for Wikileaks refused to make any comment about possible routes to Ecuador. Asked why Ecuador, he replied “That is something that Mr. Snowden needs to reply to. … It was a decision taken by him. … Various governments were approached.”

Iceland refused on Friday to say whether it would grant asylum to Snowden. Putin’s spokesman, Dmitry Peskov, said this month that Russia would consider granting asylum if Snowden were to ask for it and pro-Kremlin lawmakers supported the idea, but there has been no indication he has done so.

Senator Dianne Feinstein, chair of the Senate Intelligence Committee, said Snowden needed to be caught and brought back for trial as secrets he was carrying could do a lot of damage to U.S. interests.

“I think we need to know exactly what he has,” she told CBS’s “Face the Nation.” “He could have a lot, lot more that may really put people in jeopardy.”

Documents previously leaked by Snowden revealed that the NSA has access to vast amounts of internet data such as emails, chat rooms and video from large companies, including Facebook and Google, under a government program known as Prism.

The head of the National Security Agency, General Keith Alexander, said he did not know why it failed to prevent S