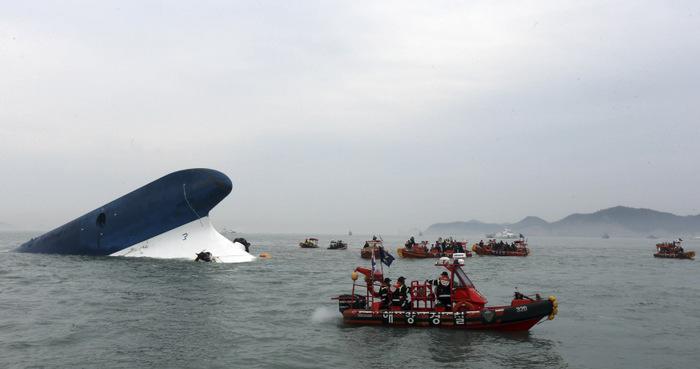 PHUKET: South Korean coastguard and navy divers resumed searching on Thursday for about 290 people still missing, many of them students from the same high school, after a ferry capsized in sight of land.

Grieving family members gathered on the quay of the coastal city of Jindo, huddled in blankets against the spring cold as efforts to locate the missing went into a second day.

One parent, Park Yung-suk, told Reuters she had seen the body of her teenage daughter’s teacher brought ashore earlier in the morning.

“If I could teach myself to dive, I would jump in the water and try to find my daughter,” Park said as light rain fell.

Of some 450 passengers on board the ferry when it set sail from the port of Incheon late on Tuesday, nearly 340 were teenagers and teachers from the Danwon school near the capital Seoul on a field trip to Jeju island, about 100 km (60 miles) south of the Korean peninsula.

So far 179 people have been rescued and six confirmed dead in what could be the country’s worst maritime accident in 20 years.

As coastguard officials arrived at Jindo on Thursday, waiting relatives jeered at them, shouting: “The weather’s nice, why aren’t you starting the rescue.”

As frustration grew with the lack of information, some parents of missing school children hired their own boat on Wednesday night. They appeared to blame the government of President Park Geun-hye and rescue officials for not making a big enough effort.

“Since the government refused to take us to the scene 11 parents chipped in 61,000 won (35 pounds) each to hire a boat and took a reporter and a diver. But there was no rescue operation going on,” said one father who declined to give his name.

“I am extremely angry. Media is saying the rescue op is still going on. It’s all a lie,” he said.

It was not immediately clear why the Sewol ferry had listed heavily on to its side in apparently calm waters off South Korea’s southwest coast, but some survivors spoke of a loud noise prior to the disaster.

A member of the crew of a local government ship involved in the rescue, who said he had spoken to members of the sunken ferry’s crew, described the area as free of reefs or rocks and said the cause was likely to be some sort of malfunction on the vessel.

There were reports of the ferry having veered off course, but coordinates of the site of the accident provided by port authorities indicated it was not far off the regular shipping lane.

The ferry sent a distress signal early on Wednesday, the coastguard said, triggering a rescue operation that involved almost 100 coastguard and navy vessels and fishing boats, as well as 18 helicopters.

According to a coastguard official in Jindo, the waters where the ferry capsized have some of the strongest tides off South Korea’s coast, meaning divers were prevented from entering the mostly submerged ship for several hours.

According to public shipping databases, the registered owner of the ship is Chonghaejin Marine Co Ltd, based in Incheon. Reuters was unable to reach the company by phone.

Earlier, company officials offered an apology over the accident but declined to comment further.

The databases showed that Chonghaejin Marine Co Ltd became the owner of the vessel in October, 2012.