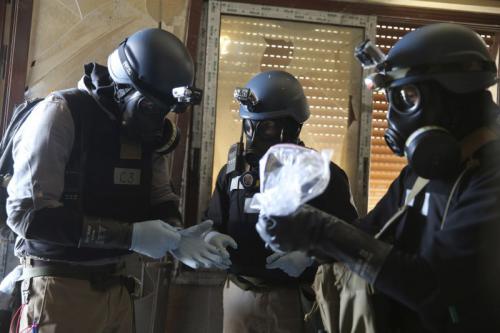 PHUKET: Russia and NATO are drawing up plans for a rare joint naval operation in the Mediterranean to protect the U.S. ship that will destroy Syria’s deadliest chemical weapons, officials and other sources said.

The operation would be a symbolic breakthrough at a time when NATO-Russian relations are strained over NATO’s anti-missile shield and East-West tensions are running high over Ukraine.

It would also signal strong global backing for the U.S.-Russian agreement last August to destroy Syria’s chemical weapons stockpile, a deal that averted the threat of U.S. military strikes on Syria.

Under the plan being discussed, NATO and Russian warships would share the task of protecting the Cape Ray, a U.S. cargo ship that will process at sea about 500 tonnes of chemicals that are too dangerous to deal with on land.

NATO and Russia are still trying to iron out some technical hitches, but NATO sources say a deal could be announced as early as next week.

NATO and Russian warships would provide strong protection to a ship carrying some of the world’s most dangerous cargo.

Russia has invested heavily in the international deal on Syria’s chemical disarmament, which it sponsored from the outset, and does not want to see it fall apart in spite of Damascus falling behind the schedule.

After that meeting, Rasmussen “asked NATO’s civilian and military experts to prepare a presentation on what the available options are,” a NATO source told Reuters.

“We understand the Russians are doing the same thing on their side. We are talking here about a potential joint operation at the sea,” the source added.

“They are discussing a joint security operation in the Mediterranean for the Cape Ray, to protect it while it destroys the chemical weapons,” said a separate source at the Organization for the Prohibition of Chemical Weapons (OPCW), which is supervising the disposal of Syria’s chemical arms.

Several NATO sources in Brussels confirmed that an operation to guard the Cape Ray is under discussion.

But after talks in Moscow on Friday, German Foreign Minister Frank-Walter Steinmeier told a news conference with Lavrov present that an agreement was on the way under which Russia would take part in protecting the transport of Syrian chemical weapons by a U.S. ship in the Mediterranean.

Diplomatic sources said both sides were willing to go ahead with the mission but some issues remain to be ironed out.

They include, among others, a unified command structure or the so-called “rules of engagement”, or response procedures in case the convoy faces danger.

The United Nations/OPCW mission said Syria shipped out a third consignment of chemical weapons materials on Monday and has destroyed some more on its territory.

Under the international agreement, Syria is obliged to transfer all its chemicals to the Mediterranean port of Latakia for removal abroad and destruction aboard the Cape Ray.

The Cape Ray is to pick up the chemicals in Italy and needs an escort in international waters. It docked in the Spanish port of Rota on Thursday en route from Virginia.

The deadline for complete elimination of Syria’s chemical arsenal is June 30, a time-frame the head of the international mission has said is still possible.

Moscow is often at loggerheads with the 28-member alliance over issues ranging from the development of the U.S. missile shield system in Europe to discussions of membership prospects for the former Soviet republics of Georgia and Ukraine.

Russia deployed its vessels twice in 2006 and 2007 to support NATO in patrolling the Mediterranean, a precedent for cooperation between Moscow and the alliance in the area.

Other than that, Russia has also temporarily contributed forces to the NATO mission in Kosovo that started in 1999.

Russia has echoed Damascus in blaming security issues in a war zone for delays in destroying Syria’s chemical arms.

Moscow has beefed up its presence in the Mediterranean since the conflict started in March, 2011, with its nuclear-powered warship Pyotr Veliky taking part in the third chemical transport from Syria.

The international community has invested heavily in the operation, providing ships, vehicles, personnel and tens of millions of dollars in donations to OPCW and U.N. funds.

Some sources said that, should the NATO-Russia operation go ahead, its meaning would be largely symbolic, also because the Americans can protect the Cape Ray on their own.

But for NATO such a mission could be a rare success story in strained ties with Russia. From Moscow’s point of view, showing off flexibility and determination on the chemical disarmament front would also serve to defuse Western criticism that it is shielding Syrian President Bashar al-Assad.