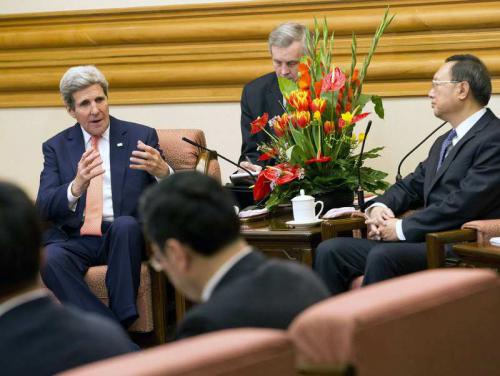 PHUKET: US Secretary of State John Kerry said on Friday that China is willing to exert more pressure to get North Korea to give up its nuclear programme.

He told reporters in Beijing he was pleased that China “could not have more forcefully reiterated its commitment” to the goal of denuclearising North Korea.

The reclusive Asian state has defied international warnings not to build atomic bombs and long-range missiles. It is believed to have enough fissile material to build up to 10 nuclear bombs, but most intelligence analysts say it has yet to master the technology to deploy such weapons.

“I encouraged the Chinese to use every tool at their disposal, all of the means of persuasion that they have, building on the depths of their long and historic and cultural and common history (with North Korea),” he said.

“They made it very clear that if the North doesn’t comply and come to the table and be serious about talks and stop its programme … they are prepared to take additional steps in order to make sure their policy is implemented,” Kerry said, adding the United States and China were now discussing “the specifics of how you do that”.

Chinese Foreign Minister Wang Yi told Kerry China would work with all parties concerned, including the United States, to play a constructive role for the region’s peace and stability.

“China will never allow chaos or war on the Korean Peninsula,” Wang said, according to China’s Foreign Ministry.

North Korea was raised during Kerry’s meeting with Chinese President Xi Jinping, the Foreign Ministry said, with Xi “setting forth China’s stance”. It gave no other details.

The East and South China Seas featured prominently on Kerry’s agenda too, with him calling for a “more rule of law based, less confrontational regime”.

The United States is uneasy about what it sees as China’s effort to gain creeping control over waters in the Asia-Pacific region, including its November 23 declaration of an air defence identification zone (ADIZ) in an area of the East China Sea that includes islands at the centre of a dispute with Japan.

China claims about 90 percent of the 3.5 million square km South China Sea, depicting what it sees as its area on maps with a so-called nine-dash line, looping far out over the sea from south China.

China and the Association of South East Asian Nations have been discussing a code of conduct for the South China Sea, and Kerry said he believed China was ready to achieve that goal.

“That would help reduce tensions that stem from the territorial and maritime disputes and, in the meantime, it’s very important that everybody build crisis management tools and refrain from coercive or unilateral measures to assert whatever claims any country in the region may have,” he said.

Wang said China was committed to a peaceful resolution for both the East and South China Seas disputes, but urged the United States not take sides and said China had an “unshakable resolve” to protect its sovereignty.

The United States should “respect historical facts and China’s sovereign interests, adhere to an objective and impartial stance and take tangible actions to promote mutual trust in the region so as to safeguard regional peace and stability”, Wang said.

Brunei, Malaysia, the Philippines, Vietnam and Taiwan also have claims over the South China Sea, or parts of it.

Kerry said he told China it would be a bad idea to establish an air defence identification zone in the South China Sea, similar to the one it set up over the East China Sea late last year, which prompted protests from Washington, Tokyo and Seoul.

“We have made it very clear that a unilateral, unannounced, unprocessed initiative like that can be very challenging to certain people in the region, and therefore to regional stability,” he said.

Wang said China was confident it could maintain peace in the South China Sea by working with ASEAN, and denounced efforts by “certain people internationally” to hype up tensions and “spread untruths”. “China is resolutely opposed to this,” Wang said, without elaborating.

Climate change was also on the agenda of Kerry’s talks.

“We need to see if working together we could identify any further steps that we may be able to take, specifically with respect to arrival at meaningful targets with respect to the 2015 climate change conference that will take place in Paris in December of next year,” Kerry said.