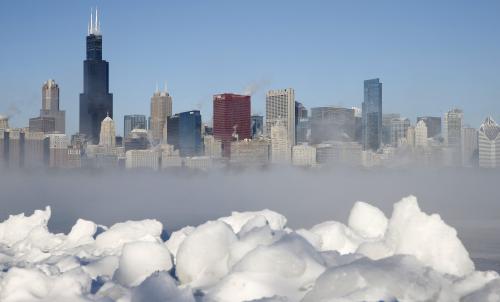 At least nine deaths have been reported across the country connected with the polar air mass that swept over North America during the past few days. Authorities have put about half of the United States under a wind chill warning or cold weather advisory.

Temperatures were expected to be 25 degrees to 35 degrees Fahrenheit (14 to 19 degrees Celsius) below normal from the Midwest to the Southeast, the National Weather Service said.

PJM Interconnection, the agency that oversees the electric grid supplying the mid-Atlantic and parts of the Midwest, said electricity suppliers were struggling to keep up with surging demand as the cold forced some power plants to shut.

“This particular cold is far-reaching, and most of our neighbours are experiencing the extreme conditions we are,” said Michael Kormos, executive vice president for operations at PJM Interconnection.

In Oklahoma, a depleted supply of propane due to extreme weather led Governor Mary Fallin to declare a state of emergency, waiving licensing requirements for out-of-state transportation companies to allow them to bring in propane.

Homeless shelters and public buildings took in people who were freezing outside.

Daniel Dashner, a 33-year-old homeless man who typically sleeps under a bridge on Milwaukee’s south side, said he opted to seek a spot at a shelter on Monday night.

“Usually if I have four or five blankets, I can stay pretty warm, but when that wind is blowing, I don’t care how many blankets I have, the wind blows right through me,” he said, as temperatures dropped to minus 6 degrees Fahrenheit (minus 21 degrees Celsius).

New York’s Central Park recorded the lowest temperature for the date, 4 Fahrenheit (minus 16 C), rising to 9 F (minus 13 C) on Tuesday afternoon with wind chills making it feel much colder, meteorologists said.

At New York’s Bowery Mission homeless shelter, the 80-bed dormitory was full on Monday night and 179 other people slept in the chapel and cafeteria, officials said.

Schools in Minneapolis and Chicago were closed for a second day on Tuesday, although Chicago plans to reopen schools on Wednesday. Cleveland remained below freezing after temperatures fell to minus 11 F (minus 24 C) on Monday, breaking a 130-year-old record.

In the normally mild south, Atlanta recorded its coldest weather on this date in 44 years, as the temperature dropped to 6 degrees Fahrenheit (minus 14 degrees Celsius), while temperatures in northern Florida also briefly dropped below freezing, though the state’s citrus crop was unharmed, according to a major growers’ group.

Among the deaths reported was a 51-year-old homeless man in Columbus, Georgia, whose body was found in an empty lot after spending the night outdoors.

Two men died in Westerport, Massachusetts, while duck hunting on Tuesday when their boat capsized, dropping them into a frigid river, officials said. A third man was rescued.

A large avalanche in backcountry outside the Colorado ski resort area of Vail killed one person on Tuesday and caught up three others who survived and were being rescued, officials said. Avalanche danger in the area was rated as “considerable” due to high winds and recent heavy snows, said Spencer Logan, forecaster with the Colorado Avalanche Information Center.

Four cold and storm-related deaths were reported around Chicago and an elderly woman was found dead outside her Indianapolis home early Monday.

The cold snap could cost the U.S. economy up to $5 billion, when lost productivity and lost retail sales are accounted for, estimated Evan Gold, senior vice president at Planalytics, which tracks weather for businesses. He said about 200 million people in major cities might face “bill shock” for heating.

The deep freeze disrupted commutes on Tuesday, with icy or closed roads and flight delays. Some 2,380 U.S. flights were cancelled and 2,912 delayed, according to FlightAware.com, which tracks airline activity. Airlines scrambled to catch up a day after the cold froze fuel supplies, leading to flight cancellations, many at Chicago O’Hare International Airport.

Hardest hit were travellers who had booked trips on JetBlue Airways Corp, which on Monday halted its flights at New York’s three major airports and Boston Logan International Airport overnight. Flights had resumed by midday on Tuesday.

She said that in their native environment, polar bears build up a layer of fat to help them through the Arctic winter of long periods of sub-zero temperatures. In Chicago, however, she said “we don’t create that fat layer in zoo animals because that would normally not be something they would be comfortable with.”