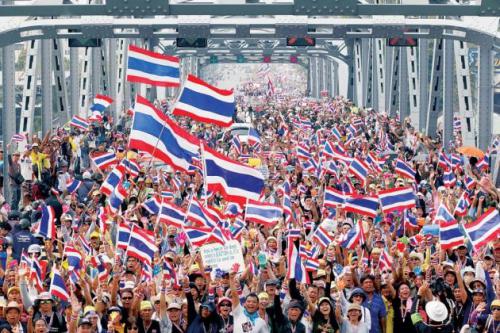 
Retailers gear for shutdown
The Nation / Phuket Gazette
PHUKET: Wholesalers and retailers have scrambled to adjust their inventory and logistics strategies to ensure that they have adequate supplies of consumer goods and foods and don’t need to raise prices during the “Bangkok shutdown” planned by anti-government forces next Monday.

Speaking after a meeting with wholesalers, retailers, fresh-market enterprises and modern traders, Yanyong Phuangrach, caretaker deputy commerce minister, insisted that retail stocks and prices would be kept under control by businesses while the capital city comes under siege.

The Commerce Ministry has also set up a centre designed to mitigate the impact on consumers during this unusual situation.

The centre will prepare a 24-hour hotline number, 1569, to receive consumers’ reactions or complaints about the protest group’s activities. It will also provide contact numbers, (02) 507 5879-81, during office hours.

“Businesses have increased their inventories of essential goods and foods from 10 days to 15-30 days. They have also prepared transport such as motorcycles and tuk-tuks to ensure that their shipments are not interrupted,” Yanyong said.

The businesses are prepared to absorb some of the costs of these measures rather than burdening their customers, he added.

The ministry’s Internal Trade Department will also send out a special task force to inspect prices at supermarkets, fresh markets, and retail shops across Bangkok during the siege.

Somchai Pornrattanacharoen, president of the Thai Wholesaling and Retailing Association, said small and medium-sized enterprises had already adapted to the political uncertainty and closed down temporarily in some areas.

“Although facing higher costs, they have adjusted to the situation. Prices should be stable or not go up too much,” he said.

He pointed out that goods traders had already increased their stocks by 5-10 per cent. Logistics providers have also prepared various means of transport including small trucks to deliver goods from warehouses outside Bangkok to traders and consumers on time.

Voravit said about 60 per cent of deliveries would be to modern traders, and 35-40 per cent to small retailers.

He suggested that the Commerce Ministry set up warehouses in the capital to ensure that whatever happens, Bangkokians would be ensured of an adequate supply of goods.

Suwit Kingkaew, senior vice president of CP All, operator of 7-Eleven convenience stores, said the company had instructed its branches in metropolitan Bangkok to stock two or three times more goods than normal.

He said the demonstration should not affect goods deliveries for 7-Elevens, as normally these are done after midnight.

Suwit added that prices would not be changed, while 7-Eleven outlets in demonstration areas would have higher sales.

Netithorn Praditsarn, director of corporate affairs at Big C Supercenter, said the company had a business continuity plan (BCP) that enabled the company to adjust and synchronise all aspects of its operations to run smoothly, including store operations, safety, delivery, stocking and employees’ commutes, to ensure maximum customer convenience.

“We will closely monitor the situation and adapt our operations to ensure availability of necessities and commodities at Big C’s signature lowest prices. As for deliveries, we are re-routing them to avoid major intersections and also exploring the option of using smaller vehicles that can use smaller roads and sois instead of main roads.

“Stores in affected areas have stocked additional quantities of necessities such as water, instant noodles, dry food and so on to ensure sufficient supplies for our customers,” Netithorn said.

He added that at this point, the company planned to keep all formats of Big C stores (Big C Supercenter, Extra, Jumbo, Big C Market and Mini Big C) open on January 13. Salinla Seehaphan, corporate affairs director of Tesco Lotus, said all of its stores would be open normally during the “Bangkok shutdown” period to ensure customer convenience.

“We have ordered higher volumes of goods, especially products necessary for daily life, such as dried foods and instant noodles, from our suppliers. This is to serve higher demands of shoppers, which are expected to increase significantly by this weekend as they stock up on products for the demonstration period,” she said.

“We have strong experience in serving our customers during times of crisis, such as the massive flood in 2011. We also have an emergency plan so that we will be able to look after our clients, employees, and communities quite effectively,” Salinla said.

Democrat leader Abhisit Vejjajiva said corruption is costing Thailand Bt300 billion per year, or 2 per cent of gross domestic product. With that amount of money, the country could build 30 Parliament Houses, 201 BTS stations, or 5,100 large secondary schools, he said.

The party yesterday held a press conference to announce its blueprint for national reform after it decided to boycott the February 2 election and spend time considering the reform measures.

Abhisit declared the anti-corruption mechanism as the first point in a seven-point national reform blueprint. He said the proposal has 20 measures.

For example, laws should be amended so that corruption cases have no statute of limitations, National Anti-Corruption Commission investigations should be increased, and so too the role of the Office of the State Audit and the Auditor-General. Moreover, there should be retroactive examination of politicians’ and senior government officials’ tax payments.

Laws should be amended to control the government’s use of advertising budget, and judicial officers should be banned from sitting on state-enterprises’ boards of directors, the party’s proposal said.

Information related to state enterprises should be transparent in the same way as listed companies. The party also proposed setting up a fund to support civil movements against corruption.

While Abhisit was speaking, a man who declined to be named blew a whistle at him. “I respect my vote. Please stop creating political speeches because your party [the Democrat Party] has never won an election,” the man said. Abhisit replied by saying “Thank you”, before the Democrats’ supporters took the protesting man out of the room.


Yingluck denies coup rumours
The Nation / Phuket Gazette
PHUKET: Caretaker Prime Minister Yingluck Shinawatra yesterday rejected rumours that she had struck a deal with the military to conduct a coup in an effort to pave the way for reforms within a year before elections.

“Who consulted whom? I don’t think so. There are too many rumours. May I ask the public to listen to news and regard rumours with caution,” she told repor