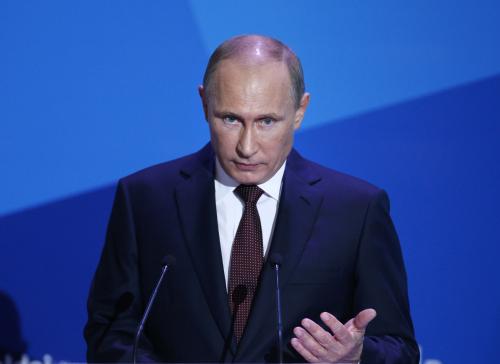 
Putin warns Ukraine over Europe ambitions
Reuters / Phuket Gazette
PHUKET: Russian President Vladimir Putin warned Ukraine on Thursday he would retaliate with protectionist measures if it signed a landmark trade deal with the European Union and suggested Kiev enter instead into a Russian-led customs union.

A day after Ukraine gave the go-ahead to sign agreements with the EU at a November summit in Lithuania, Putin made clear Moscow would hit back if its market were flooded by competitive goods from the EU because of Kiev removing import duties.

“We would somehow have to stand by our market, introduce protectionist measures. We are saying this openly in advance,” Putin told a gathering of Russia experts and journalists.

He gave no details but said: “We will need to consider how many goods access our market and what protective measures we will have to take.”

Ukrainian Prime Minister Mykola Azarov said on Wednesday that the planned agreements with the EU raised the prospect of “a European quality of life” for his former Soviet republic, squeezed between Russia and the EU.

But Azarov said nothing about the imprisonment of his predecessor, Yulia Tymoshenko, whose release European envoys have been trying to secure in the run-up to the meeting in the Lithuanian capital of Vilnius.

The 28-member EU has condemned her trial for abuse-of-office and seven-year jail sentence as politically motivated, and her continued confinement threatens prospects of signing agreements that include the one on free trade.

Russia’s pressure has injected new tension into Moscow’s relationship with Ukraine, which has pleaded unsuccessfully for cheaper Russian gas to help its hard-pressed economy.

Azarov on Wednesday spelled out the trade advantages for Ukraine, whose economy is dominated by exports such as steel, chemicals and agricultural produce. He promised there would be softer duties on Ukrainian exports almost immediately.

But Putin said Ukraine had more to gain from joining the Customs Union grouping Russia, Kazakhstan and Belarus, saying they could join forces to press the EU for better trade conditions.

“What is the advantage of Ukraine signing the EU association agreement and opening up its markets? Yes, this will make its economy more liberal. But will the Ukrainian economy itself be able to cope with this liberalism? I don’t know,” he said.

The pressure from Moscow forms part of a broader drive by Russia to deter former Soviet allies from edging out of its orbit and moving their economy and future trade towards the EU.

But Ukraine, a vast country with a population of 45 million and psychologically tied most closely to Russia by history and shared culture, is the sorest point of contention.


Eurosceptics poised ahead of German polls
Reuters / Phuket Gazette
PHUKET: A new Eurosceptical party is on the brink of entering the German parliament for the first time, an opinion poll showed, casting doubt on Chancellor Angela Merkel’s bid to maintain her center-right coalition and complicating her euro zone policy.

Merkel still looks set to secure a third term in Sunday’s general election. But the Alternative for Germany (AfD), which has risen on a tide of public hostility to bailouts of indebted southern euro zone countries, could further fragment the lower house, forcing her into a right-left “grand coalition”.

A breakthrough for the party, which advocates forcing weaker members out of the single currency area, would send shock waves around Europe and could spook financial markets, even though its voice in parliament would be small.

An INSA poll on Thursday gave Merkel’s conservatives 38 percent and their liberal Free Democrat (FDP) allies 6 percent, putting the centre-right one point behind the three left-of-centre opposition parties, with a combined 45 percent.

The survey was the first to show the AfD, created just seven months ago, clearing the 5 percent hurdle to win seats in the Bundestag lower house. Its best score in other polls has been 4 percent, but pollsters say it may have higher unavowed support.

If the AfD becomes the first new party to enter the Bundestag since 1990, Merkel would probably have to negotiate a coalition with the pro-European opposition Social Democrats (SPD), with whom she governed in 2005-2009.

The INSA poll was also the first to be taken after Bavarian conservatives won a regional election last Sunday – but it showed no bounce for Merkel in the national race.

The ruling Christian Democrats (CDU) had tried to ignore the AfD, but abruptly changed tack this week and deployed respected Finance Minister Wolfgang Schaeuble to attack the sceptics, who want Greece and other bailout recipients out of the euro.

The 71-year-old minister, a veteran supporter of European integration, said the AfD’s anti-euro argument “has no credibility and is extremely dangerous for our prosperity”.

Led by university professors and supported, in the words of one pollster, by “grumpy old men”, the AfD is mopping up right-wing protest votes and some of the millions who could not be bothered to cast ballots in 2009.

“The interesting thing is that 41 percent of AfD voters either voted for the ‘other parties’ category or not at all in 2009,” INSA chief Hermann Binkert told Reuters.

Most other AfD supporters said they had voted centre-right last time but nine percent came from the hard Left, also critical of the euro, and a handful from the SPD and Greens.

Merkel and the AfD have ruled out working with each other in the Bundestag, but one CDU leader – Volker Bouffier, who defends his premiership of Hesse in a state vote on Sunday – said he might consider it, before retracting after a storm of criticism.

The AfD, which has mobilised support on social media sites like Facebook and YouTube and crowd-sourced some donations – raising 430,000 euros ($574,000) online in just 48 hours last weekend – says it stands for the interests of ordinary Germans.

In TV campaign spots it argues that taxpayers’ money should be spent on schools, families and pensions rather than helping Greece pay off its debts. It took out a full-page press ad on Thursday saying: “The country needs new leaders!”

If the AfD enters parliament, it might paradoxically help peripheral euro zone states by making a ‘grand coalition’ with the SPD – which wants faster EU integration and more stimulus for economic growth – almost inevitable.

The SPD and Greens have voted for all of Merkel’s euro zone emergency measures in parliament whereas some dissidents in her centre-right coalition have opposed bailouts.

However, a Bundestag platform would give the AfD access to state funding and help it spread Euroscepticism in an electorate exasperated by bailouts ahead of European Parliament elections next year in which protest parties tend to perform well.

Simon Tilford, chief economist at the Centre for European Reform, said the likelihood of further bailouts “will play into the hands of those in Germany who see the euro as a mistake”.

“There is a chan