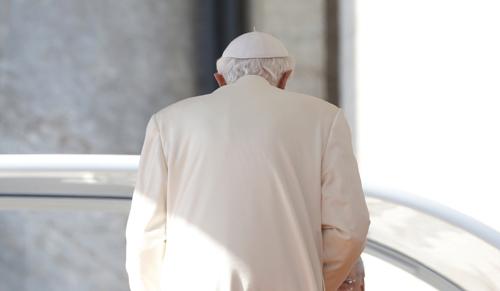 
Low-key departure as pope steps down and hides away
Reuters / Phuket Gazette
PHUKET: Pope Benedict slipped quietly from the world stage today after a private last goodbye to his cardinals and a short flight to a country palace to enter the final phase of his life “hidden from the world”.

In keeping with his shy and modest ways, there will be no public ceremony to mark the first papal resignation in six centuries and no solemn declaration ending his nearly eight-year reign at the head of the world’s largest church.

His last public appearance will be a short greeting to residents and well-wishers at Castel Gandolfo, the papal summer residence south of Rome, in the late afternoon after his 15-minute helicopter hop from the Vatican.

When the resignation becomes official at 8pm Rome time (2am in Phuket tomorrow), Benedict will be relaxing inside the 17th century palace. Swiss Guards on duty at the main gate to indicate the pope’s presence within will simply quit their posts and return to Rome to await their next pontiff.

Avoiding any special ceremony, Benedict used his weekly general audience on Wednesday to bid an emotional farewell to more than 150,000 people who packed St Peter’s Square to cheer for him and wave signs of support.

With a slight smile, his often stern-looking face seemed content and relaxed as he acknowledged the loud applause from the crowd.

“Thank you, I am very moved,” he said in Italian. His unusually personal remarks included an admission that “there were moments … when the seas were rough and the wind blew against us and it seemed that the Lord was sleeping”.

Cardinals prepare the future
Once the chair of St Peter is vacant, cardinals who have assembled from around the world for Benedict’s farewell will begin planning the closed-door conclave that will elect his successor.

One of the first questions facing these “princes of the Church” is when the 115 cardinal electors should enter the Sistine Chapel for the voting. They will hold a first meeting tomorrow but a decision may not come until next week.

The Vatican seems to be aiming for an election by mid-March so the new pope can be installed in office before Palm Sunday on March 24 and lead the Holy Week services that culminate in Easter on the following Sunday.

In the meantime, the cardinals will hold daily consultations at the Vatican at which they discuss issues facing the Church, get to know each other better and size up potential candidates for the 2,000-year-old post of pope.

There are no official candidates, no open campaigning and no clear front runner for the job. Cardinals tipped as favourites by Vatican watchers include Brazil’s Odilo Scherer, Canadian Marc Ouellet, Ghanaian Peter Turkson, Italy’s Angelo Scola and Timothy Dolan of the United States.

Benedict’s plans
Benedict, a bookish man who did not seek the papacy and did not enjoy the global glare it brought, proved to be an energetic teacher of Catholic doctrine but a poor manager of the Curia, the Vatican bureaucracy that became mired in scandal during his reign.

He leaves his successor a top secret report on rivalries and scandals within the Curia, prompted by leaks of internal files last year that documented the problems hidden behind the Vatican’s thick walls and the Church’s traditional secrecy.

After about two months at Castel Gandolfo, Benedict plans to move into a refurbished convent in the Vatican Gardens, where he will live out his life in prayer and study, “hidden to the world”, as he put it.

Having both a retired and a serving pope at the same time proved such a novelty that the Vatican took nearly two weeks to decide his title and form of clerical dress.

He will be known as the “pope emeritus,” wear a simple white cassock rather than his white papal clothes and retire his famous red “shoes of the fisherman,” a symbol of the blood of the early Christian martyrs, for more pedestrian brown ones.