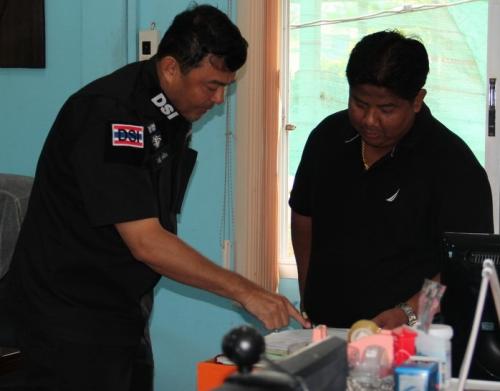 PHUKET: Officers from the Department of Special Investigation (DSI) today raided a local construction supply company suspected of stealing sand from a National Forest to sell for use in Phuket’s booming property industry.

The raid started at 8am today when DSI chief Pol Col Paisit Wongmuang and his team arrived at the Blue Sand construction supply company in Srisoonthorn, Thalang.

“Last year, the DSI pressed charges against businesses that encroached on Pa Klong Thung Maphrao National Forest in Phang Nga, and during the investigation, Blue Sand company was suspected of encroachment as well,” said Col Paisit.

“The company is run by Sgt Maj Kanongdech Palasuwan, a Tai Muang Police officer,” he added.

“We believe they have the purchase and sale details on their computer hard drives. We will send everything we seized to investigators,” he said.

“We will check which bank accounts the income goes to and who is involved in the financial process, and we will audit their taxes,” he said.

“If all the evidence and statements prove the company has encroached on and illegally taken sand from protected forest land, we will pass this case on to the Anti-Money Laundering office (AMLO) to press charges of money laundering,” he added.

“If any officers are found to be involved, we will file for arrest warrants and press charges,” Col Paisit warned.