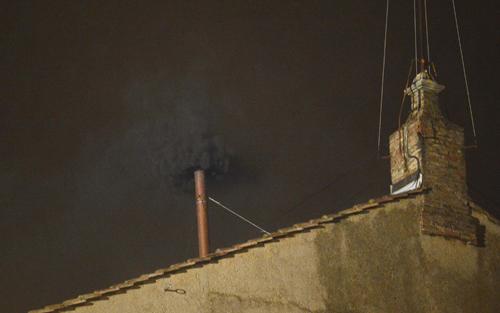 
Cardinals begin voting in earnest for new pope to face Church crisis
Phuket Gazette
PHUKET: Cardinals begin the process of choosing a new pope in earnest today, holding their first full day of voting for a leader to face a major crisis in the Roman Catholic Church.

The 115 cardinal electors return to the frescoed Sistine Chapel, where they are scheduled to hold two votes in the morning and two in the afternoon, seeking to elect a pontiff capable of facing a string of scandals and internal strife.

When a pope is elected, white smoke will emerge from the chapel and the bells of St Peter’s will peal.

The cardinals were shut inside yesterday for the first time, after a day of religious pomp and prayer to prepare for the task. Only one vote was held late last night, ending inconclusively as expected, with black smoke billowing from a chimney above the chapel to signal no pope had been elected.

“We thought there might not have been any smoke at all so it was fun to see it. I feel very excited to be here at this historic moment,” said Stefan Elsen, 50, a tourist from Trappenkamp near Kiel in northern Germany.

No modern conclave has reached a decision on the first day, so the lack of an outcome on yesterday’s single vote was no surprise. The initial vote is seen as a way of filtering the choice down to frontrunners for discussions in following days.

Most bets are on a decision by tomorrow although there is still no clear favourite and it could take longer.

No hint is expected to emerge before the pope is chosen. The Vatican has taken precautions, including electronic jamming devices, to prevent any leaks from inside the conclave.

The new pope will take up a burden that Pope Benedict declared in February was beyond his physical capabilities.

The Church is reeling from a child abuse scandal and the “Vatileaks” case in which Benedict’s butler revealed documents alleging corruption and infighting inside the Curia, or central bureaucracy. It has also been shaken by rivalry from other churches, the advance of secularism, especially in its European heartland, and problems in the running of the Vatican bank.

Frontrunners include Italy’s Angelo Scola – who would return the papacy to traditional Italian hands after 35 years of the German Benedict XVI and Polish John Paul II – and Brazilian Odilo Scherer – who would be the first non-European pope since Syrian-born Gregory III, nearly 1300 years ago.

Before beginning their conclave, the cardinals attended a Mass in the imposing St Peter’s Basilica where Cardinal Angelo Sodano, dean of the “princes of the Church”, called for unity.

“My brothers let us pray that the Lord will grant us a pontiff who will embrace this noble mission with a generous heart,” he said in his homily.

What kind of pope is needed?
In preparatory meetings before the conclave, the cardinals seemed divided between those who believe the new pontiff must be a strong manager to get the dysfunctional bureaucracy under control and others who are looking more for a proven pastoral figure to revitalise their faith across the globe.

Milan Archbishop Scola, who has managed two big Italian dioceses without being part of the Vatican’s central administration, could be well-placed to understand the Curia’s Byzantine politics and introduce swift reform.

Scherer is said to be the Curia’s favoured candidate and would satisfy those who want a non-European, reflecting the future of a Church shifting towards the developing world.

A host of other candidates from numerous nations have also been mentioned as “papabili” – potential popes – including U.S. cardinals Timothy Dolan and Sean O’Malley, Canada’s Marc Ouellet and Argentina’s Leonardo Sandri.

All the prelates meeting in the Sistine Chapel were appointed by either Benedict XVI or John Paul II, and the next pontiff will almost certainly pursue their fierce defence of traditional moral teachings.

In a ritual reflecting the centuries-old history of the conclave, the red-robed cardinals walked in procession through lavish marble chambers into the Sistine Chapel, accompanied by Latin chants and organ music.

Two rows of Swiss Guards from the papal army, dressed in traditional yellow, red and blue uniforms with helmets and pikes, stood at attention as the cardinals processed past.

The cardinals took an oath of secrecy and the papal master of ceremonies, Monsignor Guido Marini, said “Extra Omnes” or “Everybody Out”, meaning all those not involved in the election had to leave before the heavy wooden doors were pulled shut.

The cardinals meet inside a chapel which houses some of the world’s greatest art treasures – Michelangelo’s luminous frescos. The Last Judgment is depicted behind the altar and the depiction of God giving life to Adam is on the ceiling.

Each night they retire to a Vatican guesthouse, where more elaborate precautions have been taken to avoid leaks.

Some cardinals speculated this week that it might take 4-5 days to pick the new pontiff because of the difficulty of the task and the number of strong candidates.

The average length of the last nine conclaves was just over three days and none went on for longer than five.