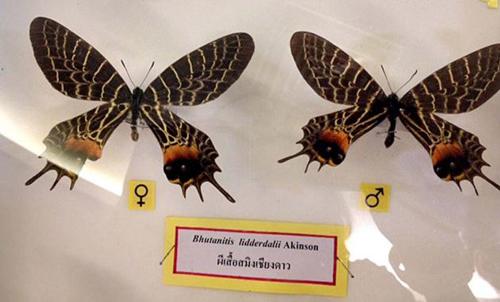 They are listed in the Convention on International Trade in Endangered Species of Wild Fauna and Flora (CITES) Appendix II alongside the Bhutanitis lidderdalii and T aeacus butterflies.

Insects on Appendix II can be traded but with certain control measures. Only the species on Appendix I receive full legal protection and cannot be sold.

“The Bhutanitis lidderdalii butterflies have vanished from Thailand for more than three decades already,” he said.

Taeacus butterflies could still be found but only in small numbers, he said.

Thailand is home to about one million butterfly species, 20 of which are protected under Thai laws and five under CITES. The country is a butterfly exporter, sending millions of pupas to Europe each year. “The major buyer is Britain,” he said.

The 16th CITES conference – a triennial forum governing the international trade in flora and fauna – is being held in Bangkok and will run until tomorrow.

Yesterday the Phuket Gazette reported details of protection afforded to five shark species (click here for article) – including the oceanic white-tip, scalloped hammerhead, great hammerhead, smooth hammerhead, and porbeagle shark – and the manta ray which were classified under Appendix II of the Convention on International Trade in Endangered Species of Wild Fauna and Flora (CITES.)