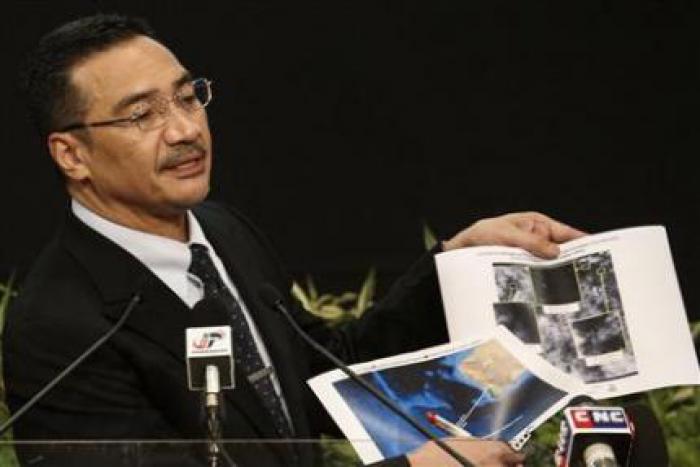 PHUKET: Aircraft and ships scouring the southern Indian Ocean for wreckage of Malaysia Airlines Flight MH370 were racing to beat bad weather on Thursday and reach an area where new satellite images showed what could be a debris field.

The international search team has been bolstered to 11 military and civilian aircraft and five ships that will criss-cross the remote search site with weather conditions forecast to deteriorate later in the day.

New satellite images have revealed more than 100 objects that could be debris from the Boeing 777, which is thought to have crashed on March 8 with the loss of all 239 people aboard after flying thousands of miles off course.

“We have now had four separate satellite leads, from Australia, China and France, showing possible debris,” Malaysian Acting Transport Minister Hishammuddin Hussein told a news conference in Kuala Lumpur late Wednesday. “It is now imperative that we link the debris to MH370.”

The latest images were captured by France-based Airbus Defence & Space on Monday and showed 122 potential objects in 400 sq km (155 sq mile) area of ocean, Hishammuddin said. The objects varied in size from one metre to 23 metres (75 ft) in length, he said.

Flight MH370 vanished from civilian radar screens less than an hour after taking off from Kuala Lumpur bound for Beijing, and investigators believe someone on the flight may have shut off the plane’s communications systems. Theories range from a hijacking to sabotage or a possible suicide by one of the pilots, but investigators have not ruled out technical problems.

Partial military radar tracking showed the plane turning west off its scheduled course over the South China Sea and then recrossing the Malay Peninsula, apparently under the control of a skilled pilot.

The logistical difficulties of the search have been highlighted by the failure so far to get a lock on possible debris despite the now numerous satellite images and direct visuals from aircraft and ships.

The search area some 2,500 km (1,550 miles) southwest of Perth has some of the deepest and roughest waters in the world, roiled by the “Roaring Forties” winds that cut across the sea.

The winds are named for the area between latitude 40 degrees and 50 degrees where there is no land mass to slow down gusts which create waves higher than six metres.

The search was called off for a full day this week because conditions were too dangerous for the search crews, which come from Australia, the United States, New Zealand, China, Japan and South Korea. Meteorologists say the current break in the stormy weather will be short.

“This is only going to be a narrow window of opportunity by the looks of things, because another weather system is moving in for Thursday, which looks like that will bring an increase in winds again and also lead to a reduction in visibility through the rain associated with the cold front,” said Neil Bennett, a spokesman for Australia’s Bureau of Meteorology.

Recovery of wreckage could unlock clues about why and how the plane had diverted so far off course in one of aviation’s most puzzling mysteries.

The United States has sent an undersea Navy drone and a high-tech black box detector which will be fitted to an Australian ship due in Perth in the coming days.

The so-called black boxes – the cockpit voice recorder and flight data recorder – record what happens during flight, but time is running out to pick up their locator beacons, which stop about a month after a crash due to limited battery life.

Malaysia said on Tuesday that the U.S. “Towed Pinger Locator” would not arrive in the search area until April 5, which would give it only a few days to find the black box before the beacon battery would be expected to run out.

The prolonged and so far fruitless search and investigation have taken a toll, with dozens of distraught relatives of Chinese passengers clashing with police in Beijing on Tuesday, accusing Malaysia of “delays and deception”.

Malaysia’s confused initial response to the plane’s disappearance and a perception of poor communications have enraged many relatives of the more than 150 Chinese passengers and have strained ties between Beijing and Kuala Lumpur.