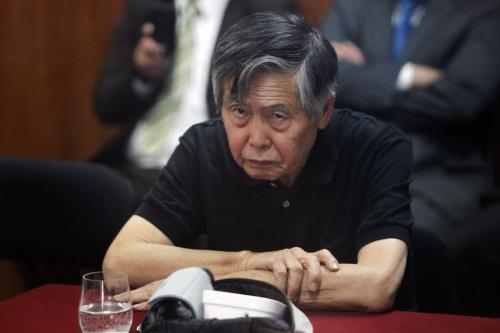 Prosecutor Marco Guzman told Reuters on Friday that after interviewing hundreds of affected women, he found no crimes against humanity were committed and no evidence they were systematically coerced into being sterilized.

The emblematic human rights case in Peru, archived in 2009 and reopened in 2011, could have extended the 25-year jail sentence of Fujimori, already in prison for corruption and human rights abuses linked to a crackdown on armed rebels.

It also threatened to lock up half a dozen members of his cabinet, including Alejandro Aguinaga, now an influential congressman and spokesman for Fujimori’s political party.

Human rights groups that have sought high-level prosecutions for the 2,000 women who say they were coerced into sterilizations said they were “outraged” by the decision.

“Fujimori might be in prison but blanket immunity continues for the perpetrators of one of the most atrocious human rights violations in Peru,” said Rossy Salazar, a lawyer with the NGO Demus.

Demus said it will appeal the closure of the investigation.

The sterilizations were carried out as part of a national program in the 1990s to cut birth rates in poor, rural parts of Peru. Some 300,000 women were rendered infertile during the 4-year campaign.

Fujimori and Aguinaga have said the operations were consensual.

The Inter-American Commission on Human Rights told Peru in 2010 to investigate and punish those responsible for the death of Mamérita Mestanza, a 33-year-old woman who activists say was coerced into a tube-tying operation that killed her.

Guzman said he may bring charges against health care workers who operated on Mestanza, and is willing to look at other individual cases of forced sterilizations.

But he said he does not think they add up to a criminal strategy orchestrated by the Fujimori government.

“The women would come to the clinic, agree to the procedure, and undergo sterilization. That was the regular, the normal process,” Guzman said.