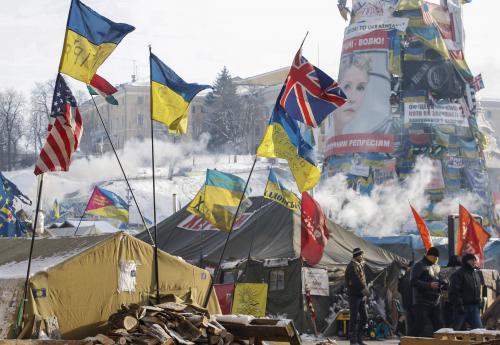 
Ukraine leader pledges government reshuffle ahead of more rallies
Reuters / Phuket Gazette
PHUKET: Ukrainian President Viktor Yanukovich, in what appeared to be an offer of concessions to the opposition amid violent protests against his rule, pledged on Friday to reshuffle the government next week and to amend sweeping anti-protest laws.

Yanukovich made his offer in comments to church leaders as the protesters erected more street barricades and occupied a government ministry building in Kiev ahead of what is expected to be another hot weekend of anti-government rallies.

The president’s Party of the Regions confirmed reports that two months of protests had spread to other parts of Ukraine, particularly to pro-European Union western regions, where it said “extremists” had seized administrative buildings.

Yanukovich, who hails from the mainly Russian-speaking east of Ukraine, said key decisions would be made at a special session of parliament scheduled to take place next Tuesday.

“I as president will sign a decree and we will reshuffle the government in order to find the best possible professional government team,” he said in comments carried on his website.

He gave no indication of how wide the government reshuffle would be and it was by no means certain Prime Minister Mykola Azarov or any other key figures would have to step down.

The dismissal of the Azarov government has been one of the main demands of the opposition and Yanukovich’s words were clearly intended to look like a concession to opponents who have voiced frustration at his stalling tactics in talks until now.

The promise to reconsider anti-protest legislation, which was rail-roaded through parliament last week by Yanukovich loyalists, also appeared to be a concession, which may take some steam out of fresh protest rallies planned for the weekend.

The mass rallies against Yanukovich’s rule erupted last November after he pulled out of a free trade deal with the European Union in favour of closer economic ties with Russia, Ukraine’s former Soviet overlord.

They have since spiralled into protests against misrule and corruption among Ukraine’s leaders and officials and there have been violent clashes with police in Kiev city centre in which three protesters died this week, two from gunshot wounds.

The protesters control key parts of the city centre, including its main Independence Square. On Friday, they occupied the main agricultural ministry building after talks stalled on Thursday night between Yanukovich and the opposition.

Commenting on the spread of protests to other cities, the Party of the Regions said in a statement: “The situation has grown sharper throughout the country.” It urged Ukrainians to ignore the calls of “radical troublemakers” to join the rallies.

Thousands stormed regional administration headquarters in Lviv, Ternopil, Ivano-Frankivsk and Khmelnytsky in western and central Ukraine, as well as parts of the northeast, the Party of the Regions said.

More than 100 people have been detained in the unrest, including 24 formally arrested, according to police.

But though some protesters lit tyres at the main flashpoint area near Dynamo Kiev football stadium, they generally appeared to have heeded an opposition call to maintain a truce.

In other conciliatory comments on Friday, Yanukovich said he would bring opposition leaders into an anti-crisis team and he said people who had been detained so far and had not committed serious crimes would be amnestied.

“I will do all I can to stop this conflict, to stop this violence and establish stability,” he told the church leaders, according to his web site.

But, referring to radicals who have bombarded riot police with petrol bombs and cobblestones, he said: “If we do not succeed, we will use all legal methods provided for by law.”

There was no immediate reaction from opposition leaders to Yanukovich’s comments on Friday.

Earlier, opposition leader Vitaly Klitschko said the only way out of the impasse lay now with international mediation.

“Instead of shifting to solving the situation by common sense, Yanukovich has declared war on his own people. He is trying to hold on to power at the price of blood and de-stabilisation of the situation in the country. He has to be stopped,” the former world heavyweight boxing champion said.

In Vienna, Europe’s main human rights and security body said it stood ready to mediate in the crisis after its current chairman, Swiss Foreign Minister Didier Burkhalter, met Azarov on the sidelines of the World Economic Forum meeting in Davos.

Burkhalter told Azarov the Organisation for Security and Cooperation in Europe, to which Ukraine belongs, “could offer its expertise to facilitate dialogue between the government and opposition”, the OSCE said in a statement.

The crisis in the ex-Soviet republic of 46 million people has rung alarm bells in the West, while Russia has warned against Western interference in the crisis.

U.S. Vice President Joe Biden phoned Yanukovich on Thursday and warned him that failing to de-escalate the standoff could have “consequences”, the White House said.