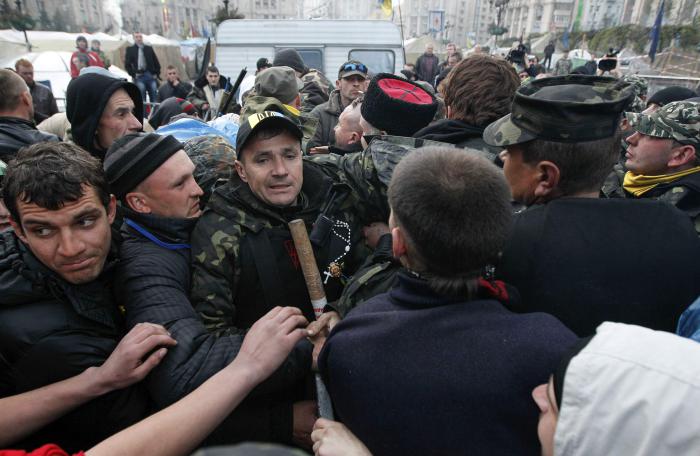 PHUKET: U.S. President Barack Obama told Russian President Vladimir Putin on Monday that Russia’s actions in Ukraine were not conducive to a diplomatic solution of the crisis in that country, and the White House warned that Moscow would suffer further costs for its behaviour.

Obama spoke to Putin at the Russians’ request, a senior administration official said, describing the call as “frank and direct,” a diplomatic construction that usually means tense.

“The president made clear that the diplomatic path was open and our preferred way ahead, but that Russia’s actions are neither consistent with or conducive to that,” the official said.

Obama told Putin that Kiev had made “real offers” to address concerns about the decentralization of powers to local governments in the country.

“That is a matter for Ukrainians to decide,” the official said. “We have always and will continue to support an inclusive process.”

Earlier, U.S. officials stopped short of announcing a new set of sanctions against Russia but said they were in consultations with European partners about the prospect.

The European Union agreed on Monday to step up sanctions against Moscow by expanding a list of people subjected to asset freezes and visa bans.

“Russia continues to engage in provocative actions in eastern Ukraine. The mere presence of the troops, in addition to what else they’ve done inside Ukraine, creates a threat of destabilization within Ukraine,” White House spokesman Jay Carney told reporters.

The next round of U.S. sanctions, which would be the fourth imposed since the Ukraine crisis began, is likely to target Russians close to Putin as well as Russian entities, three sources familiar with the discussions said on Sunday.

The sanctions have been the most visible sign of U.S. anger at Russia’s annexation of the Crimea region in southern Ukraine last month, reflecting the deepest plunge in U.S.-Russian relations since the Cold War.

Obama spoke to French President Francois Hollande about the crisis on Monday and praised Ukraine’s government for showing “great restraint” and working to unify the country, the White House said.

Carney also confirmed that the director of the U.S. Central Intelligence Agency, John Brennan, had been in Kiev over the weekend and decried what he called “false claims” levelled at the CIA by Russian authorities.

“Senior level visits of intelligence officials are a standard means of fostering mutually beneficial security cooperation including U.S.-Russian intelligence collaboration going back to the beginnings of the post-Cold War era,” Carney said.

“U.S. and Russian intelligence officials have met over the years. To imply that U.S. officials meeting with their counterparts (in Kiev) is anything other than in the same spirit is absurd,” he said.

According to media reports, Russia has urged Washington to explain what Brennan was doing in Ukraine

Pro-Russian rebels have seized buildings in around 10 other towns and cities across other eastern provinces that form the heartland of Ukraine’s heavy industry.

In the town of Slaviansk, where the authorities failed to follow through with their announced “anti-terrorist” operation, rebels called for Putin’s help.

Ukraine’s interim president, Oleksander Turchinov, said on Monday the offensive against the rebels would still go ahead. But in a sign of discord behind the scenes in Kiev, he sacked the state security chief in charge of the operation.

In one of the first signs of a military deployment by Kiev’s forces, a Ukrainian column of two tanks and more than 20 armoured personnel carriers packed with paratroops was seen about 70 km (50 miles) northwest of Slaviansk on Monday evening, according to video journalist Maksim Dondyuk who filmed them.

In Donetsk, rebels holed up in the administrative headquarters of a province that is home to 10 percent of Ukraine’s population said they planned to seize control of infrastructure and the levers of state power. They have declared an independent “People’s Republic of Donetsk” and sought Putin’s protection if they are attacked.

In a bid to undercut the rebels’ demands, Turchinov held out the prospect of a countrywide referendum on the future shape of the Ukrainian state. Pro-Russian secessionists want separate referendums in their regions, which Kiev says is illegal.

The uprising in eastern Ukraine began eight days ago but has accelerated sharply in the past 48 hours, with separatists seizing ever more buildings, including arsenals filled with weapons. They have met little opposition.

Kiev says the separatists are organised by Moscow, seeking to repeat the seizure of the Crimea region.

Russia says the armed men are all locals acting on their own, but Western officials say the uprising is too well-coordinated to be entirely spontaneous, and bears too many similarities to the Russian operation in Crimea.

Moscow says it has the right to intervene to protect Russian speakers in Ukraine, and has portrayed the people of the east as under threat from gangs of Ukrainian-speaking “fascists”.

NATO says Russia has tens of thousands of troops massed on the frontier, able to capture eastern Ukraine within days.

“I don’t think denials of Russian involvement have a shred of credibility,” British Foreign Minister William Hague said, before a meeting with EU counterparts.

Hague later announced that the ministers had agreed to expand a list of Russians barred from travelling or doing business in the EU. Work would begin to come up with new names for the sanctions list, Hague said.

Kiev is also facing economic disarray. The central bank nearly doubled its overnight interest rate to 14.50 percent from 7.50 percent. Ukraine’s hryvnia currency has lost 38 percent of its value against the dollar this year.

Turchinov had threatened to launch a military crackdown by 9 a.m., but as the deadline expired there was no sign of any action in Slaviansk.

Turchinov’s website said he told U.N. Secretary-General Ban Ki-moon he would welcome U.N. peacekeepers in Ukraine. The proposal was rhetorical as no such deployment has been proposed or could ever take place over Russia’s Security Council veto.

Turchinov’s announcement he was sending in the army was the first time the military has been activated in six months of internal disorder. The plan implies a lack of confidence in the 30,000-strong interior ministry troops, pa