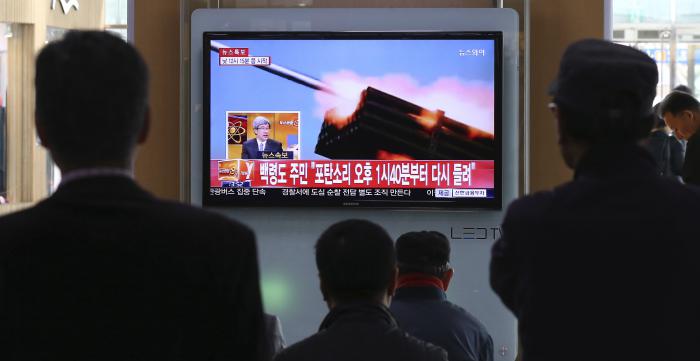 PHUKET: North and South Korea exchanged artillery fire on Monday off their disputed western maritime border, Seoul scrambled jets and residents of a South Korean island fled to bomb shelters in the most dramatic escalation of tensions since 2010.

One North Korean shell landed in South Korean waters, although none hit South Korean land, unlike in 2010 when a barrage killed two soldiers and two civilians.

A North Korean shelling drill prompted South Korean marines on a nearby island to return fire shots into the water, said a South Korean official. The South scrambled F-15 fighters to patrol its side of the border, media said.

It was not clear how many shots were fired by either side.

The firing came amid heightened tensions surrounding the North after the U.N. Security Council condemned Pyongyang for its mid-range missile launches last week, just as the leaders of South Korea, Japan and the United States met to discuss the North’s arms programme.

The area where the artillery exchange occurred is near the so-called Northern Limit Line, drawn up at the end of the 1950-53 Korean War, which the North has refused to recognise. Past clashes between the two navies in the area killed scores of sailors on both sides.

“It’s up to the two militaries either to recognise or reject their own claimed line, and challenge the other’s – this goes back and forth, so this is probably another episode of that,” said Daniel Pinkston of the International Crisis Group.

The two sides are still technically at war as the conflict ended in a mere truce, not a treaty.

Artillery shells landed in the water north of one of the populated South Korean islands off the peninsula’s west coast, a defence ministry official, who asked not to be named, said.

Residents on Baengnyeong island were evacuated to bomb shelters, a local government official said by telephone.

South Korea had warned of a strong response if the North attacked its territory.

Monday’s drills are the latest incidents in a long line of clashes along the sea border.

A South Korean navy ship was sunk four years ago near the area of the latest infringement. An international team of investigators said it was torpedoed by the North, but Pyongyang denied the charge. Months later the North bombarded a village on South Korean island in the same area, killing the four people.