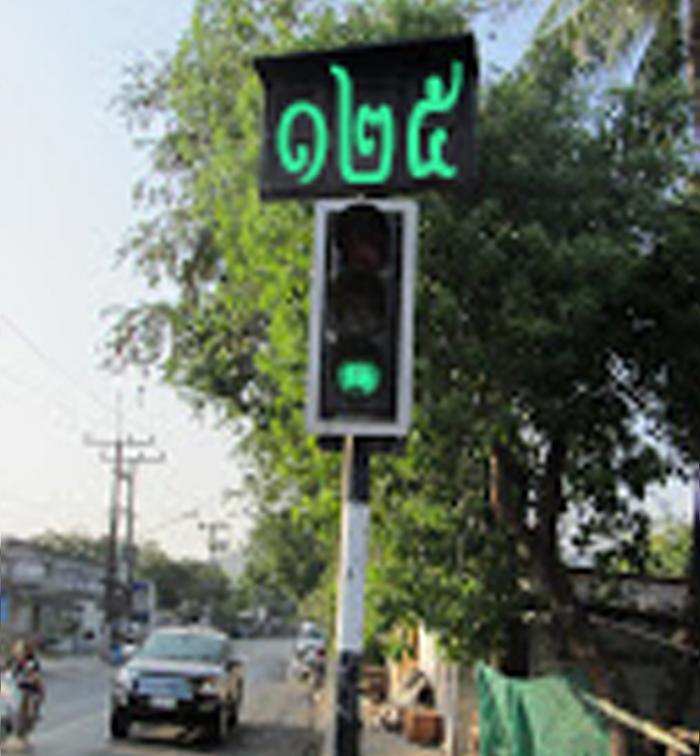 PHUKET: The Phuket Gazette has learned that Phuket has been named as the pilot province for a nationwide project that will eventually see all “countdown” traffic lights retrofitted to show Thai numerals instead of the more popular Arabic numbers currently used in most countries, including Thailand.

Deadline for completion of the 187-million-baht Phuket project is October 15.

The move is just the latest in a series of initiatives to increase the popularity of Thai numbers, which have largely been supplanted by their Arabic counterparts throughout Thailand in recent decades.

To reverse the trend, the Education Ministry in 2003 ordered all government schools to use Thai numerals in mathematics classes, and ministries now use them exclusively in official documents.

Last year, the trend began to catch on with the Department of Traffic Management, which approved and allocated the budget for the Phuket retrofit early last month, justifying the cost on the basis of the large number of traffic lights (112) in the province; the need to re-code the software used to control the countdowns; and the importance of preserving Thai culture.

News of the move has apparently received a mixed reaction.

Apart from the relatively high expense (approx US$52,000 for each of the imported devices), there is concern over the disruptions to traffic at the intersections where the work will be done, and the fact that this work has been scheduled for the rainy season when roads can be slippery.

The South Thailand Tourist Bureau notes that some of the many foreign tourists and expats on the island could have difficulty in reading Thai numerals. On an average day, the number of foreigners in Phuket is approximately 1.6 times the number of Thais, the bureau points out.

Contacted by the Gazette for comment, the owner of a popular Thai restaurant told this reporter, under condition of anonymity, that he fears increased exposure of foreigners to Thai numerals might “jeopardize the ability of local business owners to maintain secret double pricing schemes.” Such schemes provide for one price for Thais and another (much higher) one for foreigners.

And some local politicians say that the introduction of countdown traffic lights in the last decade has done little to improve the ever-worsening traffic congestion on Phuket, which is also renowned for its appalling traffic safety record. Thailand ranks among the world’s worst countries in terms of road injury and fatality rates, these politicians say, noting that much of the blame for this lies in the use of “foreign” [Arabic] numbers in the countdown boxes.

But Jason Siebert, a long-term expat from the Australian city of Cairns, told the Gazette that, “It won’t make any difference because motorists here rarely stop at traffic lights. It just doesn’t matter what kind of numerals are used.”

In fairness to all motorists, Thai and foreign, the Provincial Roads Department has today announced a public hearing on the issue. “We want to give road users ample time to formulate and express an opinion,” says Somboon Maisohnjai, chief of the department. “So the hearing won’t be held until tomorrow, at 3:15pm, on James Bond Island.”

The chief notes that tomorrow is April Fools Day. “So don’t believe everything you read in the Phuket Gazette,” he concluded.