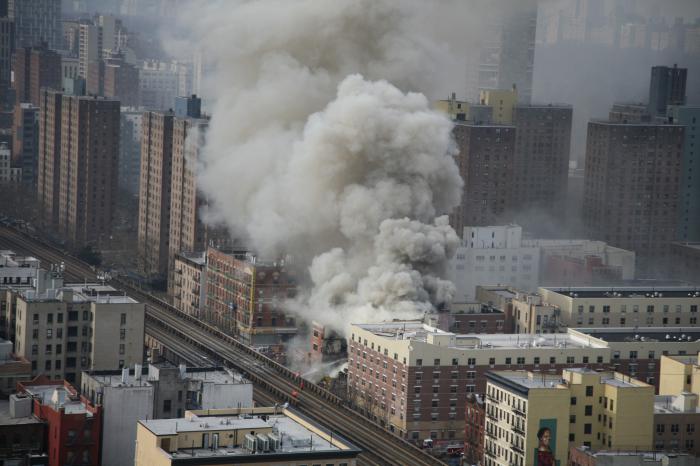 PHUKET: Federal safety authorities launched an investigation on Thursday into a gas explosion that caused the collapse a day earlier of two New York City apartment buildings, killing seven people and injuring dozens of others.

The still-smouldering rubble prevented investigators from getting close enough to examine the main pipe that supplies natural gas to the Upper East Side neighbourhood, said Robert Sumwalt, a member of the National Transportation Safety Board, which reviews accidents involving natural gas.

When firefighters say the area is safe, he said, investigators will conduct a pressure test on the pipe to find the location of the leak that may have caused the blast.

“We are operating under the assumption at this point that it is a natural gas leak that led to an explosion,” Sumwalt said.

The explosion at about 9:30 a.m. (13:30 GMT) on Wednesday shook the East Harlem neighbourhood shortly after a resident complained to the Con Edison utility about a gas odour.

Sumwalt said the scene was “in one word, devastating.”

“You’ve got basically two five-story buildings that have been reduced to essentially a three-story pile of bricks and twisted metal,” he said. “The smell of smoke is omnipresent.”

Four women and three men were killed, but only four victims’ identities have been released so far.

At least three children were hurt; two were treated for minor injuries and released, while a third was in critical condition, hospital officials said.

The two buildings on a largely residential block at East 116th Street and Park Avenue housed 15 apartments, a ground-floor church and a piano store.

Residents of seven nearby buildings, with nearly 90 apartments, lost heating and gas services.

Passersby in the primarily Latino neighbourhood donned dust masks or wrapped winter scarves around their faces to limit inhalation of dust and smoke.

The mayor said 66 people who lost their apartments or could not stay there have been given shelter.

“Anyone affected by this tragedy will be helped – anyone – regardless of immigration status… They should not be afraid,” de Blasio said.

The mayor lamented that the neighbour who called Con Ed at 9:13 a.m. (13:13 GMT) on Wednesday failed to call the night before, when he first noticed the gas odour.

“That might have given us an opportunity here,” de Blasio said, urging anyone who smells gas to immediately call Con Edison or the city’s complaint line at 311.

Consolidated Edison Inc spokesman Bob McGee said the last time the utility had received a complaint about a gas odour in the neighbourhood was in May.

At that time, Con Ed shut off the gas and the building hired its own contractor to fix the leak. On July 3, Con Ed crews returned to the building to certify that repairs were done correctly, McGee said.

On February 10 and February 28, there were “high speed” checks made of the gas pipes, he said.

“Our goal for being here is to find out what happened so that nobody has to go through this again,” he said.