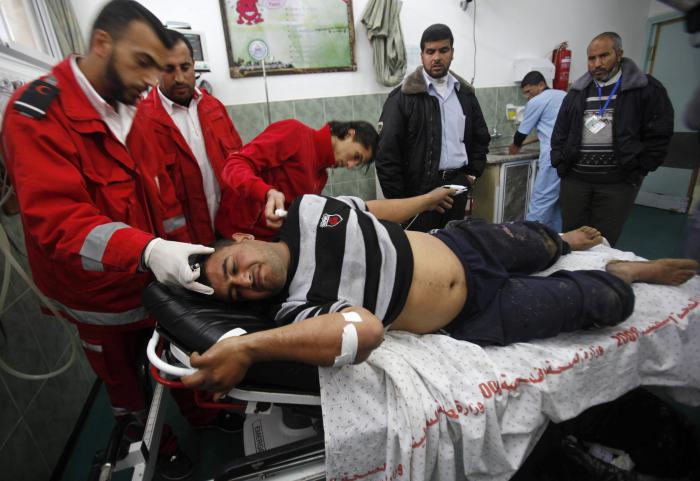 PHUKET: A small armed faction in the Gaza Strip fired rockets at Israel on Thursday, drawing retaliatory air strikes and pushing cross-border violence into a third day despite a truce called by the more powerful Palestinian group Islamic Jihad.

The clashes have been the most intense since the Gaza war of November 2012. This time, however, casualties have been scant with winter rains keeping many people indoors, and Israel’s Iron Dome interceptor shooting down some of the Palestinian rockets. Most Israeli strikes have hit unmanned militant facilities.

Hamas, the Islamist movement governing Gaza, has also kept its fighters out of this flare-up so far.

The Iranian-backed Islamic Jihad, which often operates independent of Hamas, began the barrage on Wednesday after Israel’s forces killed three of its fighters a day earlier.

On Thursday afternoon, Islamic Jihad leader Khaled al-Batsh announced that a deal that had been brokered by Cairo to end the 2012 war was back in effect, provided the Israelis also complied.

“Following intensive Egyptian contacts and efforts, the agreement for calm has been restored,” he said on Facebook.

Within hours, however, the Popular Resistance Committee (PRC), a Gaza splinter group, said it had launched eight rockets into Israel. At least four struck open areas and one was downed by Iron Dome, the Israeli military said.

Israel’s air force then bombed a PRC camp in southern Gaza and “three other terror sites” to the north, the military said.

There was no immediate word of any injuries. On Thursday morning, before the Islamic Jihad cease-fire announcement, three Palestinians were hurt in an Israeli air strike.

On Wednesday, Israel carried out 29 air strikes and its tanks shelled militant targets in Gaza as Islamic Jihad fired 60 rockets. There were no casualties in Wednesday’s exchange.

Israel withdrew from Gaza in 2005 after 38 years of occupation, a unilateral move that boosted Hamas, Islamic Jihad and other Palestinian groups hostile to the Jewish state.

Since then, there have been several outbreaks of fighting. In recent months, however, Hamas has sought to maintain calm after being weakened by the fall of sympathetic Islamist politicians in Cairo and by the resulting clampdown on arms and commercial smuggling from Egypt to Gaza.

Israel’s hard line foreign minister, Avigdor Lieberman, has called for Gaza to be retaken and Hamas crushed. Such actions would prove to be bloody and damaging for peace talks with the rival U.S.-backed Palestinian administration in the occupied West Bank.

“The only solution to this situation of a ceaseless cycle of terror is reoccupation of Gaza and a clean-out of the stables there,” Lieberman said on Facebook on Thursday.

Netanyahu, however, sounded more restrained. He vowed Israel would “hit back with increasing force” against anyone who tried to ruin celebrations over the next few days of the Jewish festival of Purim.

Israel did not publicly respond to Islamic Jihad’s truce announcement but one of its senior defence officials said earlier on Thursday he expected the fighting to die down soon.

Palestinian sources noted that Hamas had not joined in the rocket attacks, an apparent sign that it hoped to avoid a wider conflict, but it did not immediately act to stop the launches, either.

Islamic Jihad has strong ties with Iran, Israel’s arch-foe, and it is the second largest faction in the enclave. Smaller groups include al Qaeda-aligned militants.