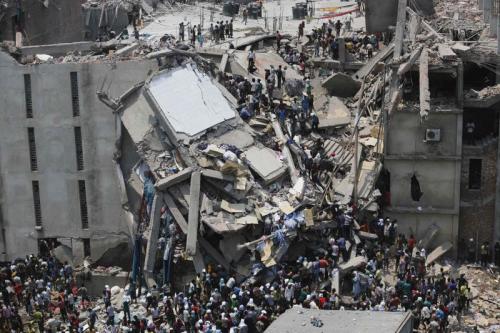 The disclosure created a quandary for Obama, who has set the use of chemical weapons as a “red line” that Assad must not cross, and triggered calls from some hawkish Washington lawmakers for a U.S. military response, which the president has resisted.

In a shift from a White House assessment just days earlier, U.S. officials said the intelligence community believed with “varying degrees of confidence” that the chemical nerve agent sarin was used by Assad’s forces against rebel fighters. However, it noted that “the chain of custody is not clear.”

While Obama has declared that the deployment of chemical weapons would be a game-changer and has threatened unspecified consequences if it happened, his administration will move carefully – mindful of the lessons of the start of the Iraq war more than a decade ago.

Then, President George W. Bush’s administration used inaccurate U.S. intelligence to justify the invasion of Iraq in pursuit of nuclear, chemical and biological weapons that turned out not to exist.

On top of that, polls show most Americans, weary and disillusioned by the wars just ended in Iraq and now winding down in Afghanistan, have little appetite for another U.S. military engagement in the Muslim world.

“Given the stakes involved and what we have learned from our own recent experiences, intelligence assessments alone are not sufficient – only credible and corroborated facts that provide us with some degree of certainty will guide our decision-making,” Miguel Rodriguez, White House director of the office of legislative affairs, said in a letter to lawmakers.

One senior U.S. defence official told reporters: “We have seen very bad movies before,” where intelligence was perceived to have driven policy decisions that later, in the cold light of day, were proven wrong.

The term “varying degrees of confidence” used to describe the assessment of possible chemical weapons use in Syria usually suggests debate within the U.S. intelligence community about the conclusion, the defence official noted.

The White House said the evaluation that Syria probably used chemical weapons was based in part on physiological samples, but a U.S. official declined to say what kind of evidence it had, like soil samples or blood or hair from victims.

The scale of the use of sarin appeared limited, with one U.S. intelligence official noting that nobody was “seeing any mass casualties” from the possible use of chemical weapons in Syria.

The United States has resisted being dragged militarily into Syria’s conflict and is providing only non-lethal aid to rebels trying to overthrow Assad. Washington is worried that weapons supplied to the rebels could end up the hands of al Qaeda-linked fighters.

However, acknowledgement of the U.S. intelligence assessment appeared to move the United States closer to some sort of action in Syria, military or otherwise.

A White House official told reporters “all options are on the table in terms of our response” and said the United States, which has been criticized for not doing enough to halt the bloodshed, would consult with its allies.

The official said the U.S. military was preparing for a range of “different contingencies” but declined to give specifics. Options available to Obama could include everything from air strikes to commando raids to setting up a Libya-style “no-fly” zone, either unilaterally or in cooperation with allies.

Still, Washington appeared intent on deflecting pressure for swift action by stressing the need for a comprehensive United Nations investigation on the ground in Syria – something Assad has blocked from going forward.

Syria’s deputy foreign minister, Faisal Mekdad, in an interview with Reuters, dismissed Western and Israeli claims that government forces had used chemical weapons and said it was a “big lie” that Syria was preventing the U.N. probe.

Assad has clung to power despite repeated U.S. calls for him to step down. More than 70,000 people have been killed in the revolt against his family’s decades-long autocratic rule. A military stalemate has set in but Assad has still been able to rely on support from Russia and Iran.

“The reality is that as a country we can’t declare red lines and then do nothing when they are crossed. Eventually we have to do something,” said Ariel Ratner, a former Middle East adviser in the State Department and now a fellow at the Truman National Security Project.

The Obama administration’s sudden disclosure caught many off guard. It came just two days after Defence Secretary Chuck Hagel and other U.S. officials appeared to play down an Israeli assessment that there had been repeated use of chemical weapons in Syria.

France and Britain have also concluded that evidence suggests chemical arms have been used in Syria’s conflict.

“The intelligence community has been assessing information for some time on this issue and the decision to reach this conclusion was made within the past 24 hours,” Hagel said.

The White House said it wanted to provide a “prompt response” to an April 24 query from lawmakers about whether Syria had used chemical weapons. The legislators’ letter to Obama cited the assessments by Israel, France and Britain.

Republican Senator John McCain of Arizona, one of the leading advocates of deeper U.S. involvement in the Syrian conflict, said the intelligence assessment demanded a response.

“The president of the United States said that if Bashar Assad used chemical weapons, it would be a game changer, that it would cross a red line,” he said. “I think it’s pretty obvious that red line has been crossed.”

Democratic Senator Dianne Feinstein, head of the Senate Intelligence Committee, voiced concern that the public acknowledgement of the U.S. intelligence assessment could embolden Assad and may prompt him to calculate “he has nothing more to lose.”

“Syria has the ability to kill tens of thousands with its chemical weapons. The world must come together to prevent this by unified action,” she said.

In Brussels, the NATO alliance was “concerned by reports of the possible use of chemical weapons,” an official said.

Patriot missile interceptors that NATO has sent to Turkey, a member of the alliance which borders Syria, would “help ensure the protection of Turkey against any missile attack, whether the missiles carry chemical weapons or not,” the official added.