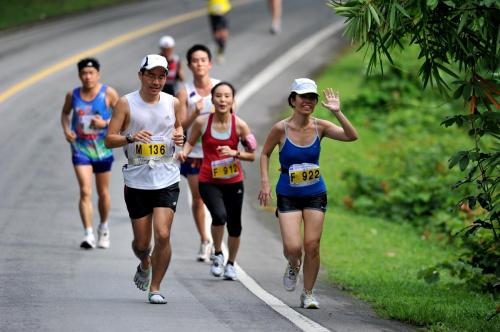 PHUKET: This year’s Laguna Phuket International Marathon is rocking its thousands of runners and fans around the world with a specially-commissioned “Run Paradise” theme song.

The anthem celebrates the event’s unique blend of enthusiasm for running and community fund-raising on the paradise tropical island – all to an inspiring up-tempo beat.

The new song can be heard on YouTube where it has been posted with a video of images from previous Laguna marathons.

Thousands of runners from across the globe will “Run Paradise” in the eighth edition of the annual event on Sunday, June 9, to re-affirm its status as Asia’s most popular family-friendly destination marathon.

Runners and spectators alike can help with fund-raising for the Laguna Phuket Foundation, which supports a number of community and schools charity initiatives.

“Run Paradise” is an apt description, with runners of all ages and abilities on a mainly flat course that takes in rubber and pineapple plantations, beach views, local villages and the lagoons of Laguna Phuket – all in a family-friendly carnival atmosphere.

The new song will be performed live at the runners’ Pasta Party on the eve of the marathon by popular Phuket teen band The Legends of Siam.

Online marathon registration can be done at this link, with special deals at Laguna Phuket hotels also on the website.