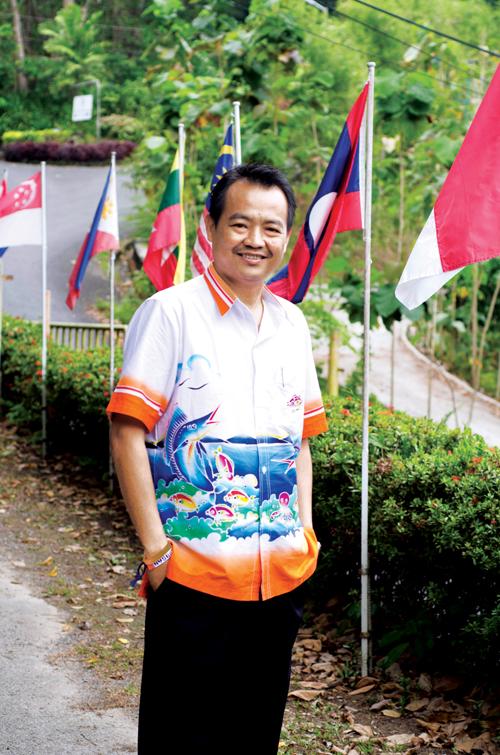 PHUKET: Tucked away halfway up Rang Hill, in Phuket Town, is the small office of the National Broadcasting Services of Thailand, Phuket (NBTP), the production house of the town’s only national television station, Channel 11.

The 15-year-old station is tiny and quaint – if somewhat run-down. Its setting is made more rustic surrounded by a virgin forest overrun with creepers and towering rainforest trees.

But as the newly appointed Director of NBTP, Rittidat Kodsan will tell you, looks can be
deceiving. It is here that quality TV programs are made daily by a professional production team within its purpose-built studios. At the head of it all is Rittidat, who took the helm two months ago.

Khon Kaen-born Rittidat is a seasoned government PR man whose work with the Ministry of Information has spanned more than twenty years. He is an ‘all-arounder’ who has been a technician, cameraman, news reporter, producer, and finally the policy maker he is today.

As a fledgling cameraman in Sakon Nakhon, Rittidat would find his raison d’être when assigned to cover the Royal family’s yearly visit to the Northeast. It was the pride and joy he still relishes today.

“As a country boy, it was a great honor to work closely with the royal family. Throughout the 1970s and 1980s, King Bhumipol and Queen Sirikit initiated many agricultural and craft projects in Isaan and we recorded their activities for national television using the old-fashioned 8-mm camera. Some of the clips are still kept at the PR Office in Sakon Nakhon,” says a proud Rittidat.

After Sakon Nakhon, he transferred to Phrae. Still working as a civil servant, Rittidat also contributed to the weekly newspaper Matichon and his article on the controversial Kaeng Sua Ten Dam won him a Reporter of the Year Award. The kudos stirred in him an interest in local politics and when he relocated to Chiang Mai, he enrolled in a degree course on community development.

After graduation, his professional life took a slight new turn – his later positions were taken up with public relations and radio work. The move to Phuket is his first foray into television.

But there’s no doubt that he will live up to the challenge. His long experience in media work and his keen eye as a news analyst will help bridge any gaps that exist between different media.

“The move to TV is clearly a challenge,” says Rittidat. “I am relatively new to its three-dimensional quality. But I will have fun, for sure.”

He goes on to explain that there are clear guidelines to follow when producing government TV programs. “We focus on government policies and achievements. Other mainstays include the Royal family and Thai culture. This year we are told to cover issues like compromise between political factions and the upcoming ASEAN Economic Community. We also promote Phuket as a tourist town and cover cultural events.”

However, for a trained community developer like himself, Rittidat would like to see more involvement from the lower rank of the society. “It would be good to know what local communities want from their TV programs. I am also interested in airing more shows on village affairs and happenings.”

Rittidat is married with three children aged 16, 15 and 8. His wife is also a civil servant attached to the Ministry of Labor office in Kalasin. The family has been staying apart because of his constant transfers to different regional postings.

But Rittidat is taking it in his stride and says: “It’s part of a civil servant’s life. But I do make an effort to see my family at least every two months.”

The individuals profiled in “Thai Gallery” are chosen on the basis of their contributions to Phuket as an international community, and, often, for having made those contributions through successful social and/or working relationships with foreigners.

This implies some foreign language skills and an interest in interacting with different cultures. They are people who in our experience, help make the lives of expats far more enjoyable here than might be the case without them.

Phuket Gardening: Treasures in your garden