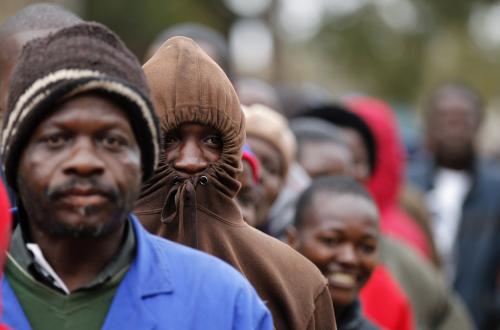 With no reliable opinion polls and amid allegations of vote-rigging, it is hard to say whether Tsvangirai will succeed in his third attempt to oust 89-year-old Mugabe, who has run the southern African nation since independence from Britain in 1980.

Both sides are forecasting landslide wins but in a country with a history of election violence the big question is whether the loser will accept the result of a poll dogged by logistical problems and reports of intimidation and irregularities.

Mugabe, who rejects past and present charges from critics of vote-fixing and intimidation by his ZANU-PF party supporters, has said he will concede if defeated.

“I’m sure people will vote freely and fairly,” he told reporters after casting his ballot in a school in Harare’s Highfields township.

“There’s no pressure being exerted on anyone.”

Polls opened on time at 0500 GMT, with long queues of people braving unseasonably cold weather to stand in line from well before dawn.

At one polling station in the eastern province of Manicaland, a key swing region, the queue of voters, many wrapped up in blankets, stretched for a kilometre (0.6 miles).

“I got up at 4 but still couldn’t get the first position in the line,” said sawmill worker Clifford Chasakara. “My fingers are numb but I’m sure I can mark the ballot all the same. I’m determined to vote and have my vote counted.”

In Harare, the epicentre of Tsvangirai support, the mood was excited and upbeat. A large turnout, especially in cities, is likely to benefit the 61-year-old and his Movement for Democratic Change (MDC) party, analysts say.

“We are here to vote and I’m convinced Harare will lead the way to change,” John Phiri, a domestic worker in his 30s, said in a polling station in the upmarket Mount Pleasant suburb.

Casting his vote at a Harare high school, Mugabe’s rival Tsvangirai said he expected to win “quite resoundingly”.

Around 6.4 million people, or half the population, are registered to vote. Results are expected well within a five-day deadline intended to prevent a repeat of problems seen in the last election in 2008, when big delays led to serious violence.

The threat of unrest remains at the back of people’s minds but the atmosphere was markedly lighter than five years ago, with both party leaders preaching peace and tolerance.

The pair met at State House late on Tuesday in the presence of African Union (AU) monitoring chief Olusegun Obasanjo, an AU official said. Details of the meeting – an unusual encounter on the eve of an election – were not immediately known.

Asked at a news conference on Tuesday whether he and his ZANU-PF party would accept defeat, Mugabe was unequivocal: “You either win or lose. If you lose, you must surrender.”

So far so good

His comments were in marked contrast to the acrimony of what he described as an “energy-sapping” campaign, and may help to ease fears about a repeat of the turmoil that broke out in 2008 after he lost the first round of voting.

Around 200 Tsvangirai supporters were killed then before South Africa brokered a power-sharing deal that stopped the bloodshed and stabilised the economy, but established a unity government criticised as fractious and dysfunctional.

Western observers have been barred from the elections, leaving the task of independent oversight to 500 regional and 7,000 domestic monitors.

Obasanjo, a former Nigerian president, said there were no grounds at the moment to suggest the elections could not be declared credible.

“So far so good,” he told reporters after visiting a polling station in Harare.

The monitors’ verdict is crucial to the future of Zimbabwe’s economy, which is still struggling with the aftermath of a decade-long slump and hyperinflation that ended in 2009 when the worthless Zimbabwe dollar was scrapped.

The United States, which has sanctions in place against Mugabe, has questioned the credibility of the poll, pointing to a lack of transparency in its organisation and pro-Mugabe bias in the state media and partisan security forces.

However, if the vote receives broad approval, there is a chance Western sanctions may be eased, allowing Harare to normalise relations with the IMF and World Bank and access the huge investment needed to rebuild its dilapidated economy.

Tsvangirai urged African monitors not to give the vote the thumbs-up simply because they do not witness bloodshed.

“Mugabe is the world’s oldest leader and one of its longest-ruling dictators. He is fixing this election in a more sophisticated fashion than previous ZANU-PF campaigns of beatings, killings and intimidation,” he wrote in an editorial in the Washington Post.

In an interview with ITV broadcast on the eve of the election, Mugabe said his government had “never ever rigged elections” and said he had no regrets about his years in power.


Taliban jailbreak prompts fears of more attacks
Reuters / Phuket Gazette
PHUKET: Pakistani authorities moved some of their most notorious militant inmates after an intelligence warning of an imminent jailbreak but a Taliban raid this week has raised fears about the security of all Pakistani prisons.

Pakistan was taken off guard on Monday when a squad of highly trained Taliban fighters overran a century-old prison in Dera Ismail Khan, a town on the edge of a lawless ethnic Pashtun tribal area, setting free a band of senior militants together with more than 200 other inmates.

Those included about 30 mid-ranking Taliban fighters, but no internationally big names, security and Taliban sources said – a reflection of the fact that Pakistan’s most serious Taliban fighters are held elsewhere.

The raid, complete with suicide bombs, grenade explosions and hours of gunfire, took place almost one year after another big jailbreak in another northwestern city, Bannu, and was carried out with similar, military-style precision.

Like a year ago, the authorities scrambled on Wednesday to boost security at jails. And once again, there was talk of an insider job.

“It’s a massive security breach,” said an interior ministry official who asked not to be identified.

“Taking the cue from that, other major prisons around the country are being secured.”

He said additional police and paramilitary reinforcements were being deployed at all major prisons around the country, particularly those in the city of Karachi and in Punjab province where some of Pakistan’s most hardcore Taliban are held.

Intelligence about a new Bannu-style attack first appeared on the desks of senior officials a few months ago, sources said.

As a result, several high profile inmates including London-educated Ahmed Omar Saeed Sheikh convicted of the 2002 killing of U.S. journalist Daniel Pearl, have been relocated from the Karachi Central Prison to other, more secure locations, sources said.

The success of Monday’s jailbreak has only emboldened the Taliban. As additional units