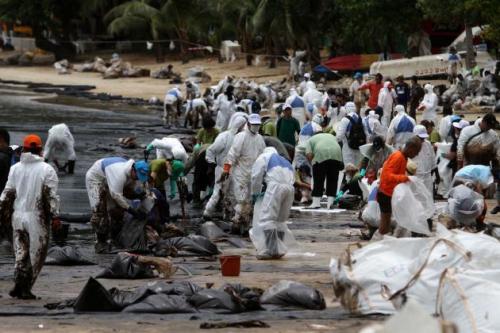 
Oil spill probe to be finished in 7 days
The Nation / Phuket Gazette
PHUKET: The Energy Ministry promises to complete its investigation into the cause of the disastrous offshore oil spill within seven days and to ensure full compensation by PTT Global Chemical (PTTGC).

“The situation is under control now as no oil stain is found on the waters off Koh Samet,” Energy Minister Pongsak Ruktapongpisa said yesterday.

The fact-finding committee, to be led by Thongtip Ratanarat, former executive director of the Petroleum Institute of Thailand, would start its work today to find out why the crude oil leaked from PTTGC’s platform in the Gulf of Thailand and whether the operator had complied with protocol. Initially, PTTGC insisted that it had followed protocol to mitigate the situation. A 1,500-metre-long boom was laid on the surface, but probably because of high waves, the oil slick slipped outside the containment area.

Pongsak said the leaked volume was within their handling capacity and the operators had conducted regular drills.

He held a meeting with high-ranking officials from the Energy Ministry and PTT Group.

Anon Sirisangtaksin, CEO of PTTGC, promised Ao Phrao would be cleaned up within seven days.

The company and independent experts would cooperate in designing the rehabilitation plan and assessing the marine environmental damage, he said.

The use of the dispersant called Slickgone NS would not threaten marine life, he said.

About 35,000 litres of the chemical have been sprayed on the oil slick in the past days, prompting concern among environmentalists.

Nattachart Charuchinda, senior executive for the downstream petroleum business at PTT, said that authorities should call for annual drill instead of one every three years. Some drilling conditions must also be improved for higher efficiency. The oil platform involved in the accident would remain closed until the investigation is completed.

The Marine Department is in charge of the drills. The latest was held in May with the Navy, Natural Fuels Department, oil refineries, oil exploration companies and an oil-spill-related unit from Singapore.

An Energy Ministry source said the ministry plans to bring the drill under its supervision for flexibility.

Pongsak told reporters that all businesses and individuals affected by the oil slick should refrain from suing PTTGC, as the company had promised to take full responsibility for the damage. While those directly impacted would be immediately granted compensation, a committee would be set up to appraise compensation for those indirectly affected.

However, the Prevention and Elimination of Marine Pollution Caused by Oil Spill committee under the PM’s Office resolved yesterday to have the Marine Department file a compensation lawsuit against the company.

“We haven’t yet concluded the amount. It’s too soon as this affects natural resources and properties and incurs expenses for agencies,” Wichien Jungrungruang, director-general of the Pollution Department, said after the meeting.

The department has ordered PTTGC to submit a rehabilitation plan for the damaged natural resources and related losses by the oil spill by the end of this month.

PTTGC must seek the opinions of stakeholders and locals on suitable methods to restore natural resources as well as Phrao beach to their original condition.

If the PTTGC does not follow the department’s order, it will be faced with legal action, said Sorasak Saensombat director-general of the Marine Department, during his trip to observe the progress in the clean-up at Phrao beach.

The Thai Hotels Association is calling for immediate measures from the government to cope with the oil spill through four senate committees, for fear that the problem could not be dealt with in time before the next high tourist season.

Chairman Surapong Techaruvichit said the four objectives were an investigation and problem-solving process, compensation for profits lost, recovery and restoration plans for the loss of Thailand’s image as a tourist destination, and long-term preventive and preparatory steps to be led by authorities.

The association’s meeting concluded that it would bring its concerns and proposed measures to the senate committees on energy, tourism, natural resource conservation and good governance.

Buntarik Kusolwit, the head of the association’s eastern region committee, said room reservations on Samet have all been cancelled. The recovery in tourism would likely take more than one year, and hotels should be compensated throughout the period.


Experts scoff at PTTGC’s response
The Nation / Phuket Gazette
PHUKET: When the oil first leaked from the PTT Global Chemical (PTTGC) offshore platform near Rayong on Saturday, relevant officials decided to deploy a 200-metre boom to contain the spill, which later proved to be far too short.

Speaking on condition of anonymity, a PTTGC staff member said this 200-metre boom was the only size available in large ships.

“But we also inflated spare booms to deal with the spill,” the source, who is part of the PTTGC emergency-response team, added.

Later, in response to a model assessment produced by the Pollution Control Department, the team put out a 1,200-metre boom about 1,000 metres from Koh Samet’s Ao Phrao beach.

The PTTGC staff member added that after the booms were deployed, oil skimmers were also put into action. In addition, boats and aircraft have been spraying dispersant chemicals on Sunday.

“We have been proceeding in line with international practice on responding to oil spills,” he said, adding that nobody thought the oil would wash up at the Ao Phrao beach on Sunday night.

“In fact, we believed we could stop the oil about 4 kilometres from Ao Phrao,” he said, adding that the oil was possibly pushed toward the beach by high tides and strong winds.

He added that since Thailand did not have chemical-spraying aircraft, PTTGC had to wait for help from Singapore-based Oil Spill Response Ltd. “The aircraft started spraying the chemicals at about 3pm on Sunday,” he said. “By then, the oil slick had already spread over quite a wide area.”

He went on to say that he was confident the dispersants would not affect the coral or marine life because the droplets would go just a metre or two under the surface of the seawater.

“At that depth, the chemical won’t reach the abode of aquatic animals. Then within three to four weeks, sunlight and bacteria will naturally dispose of all those droplets,” he said.

Phaitoon Mokkongpai, a researcher at Burapha University, explained that the coral around Koh Samet did not lie that deep below the water surface. “Most of them will be affected,” he said.

Thon Thamrongnawasawat of Kasetsart University’s Faculty of Fisheries said several studies show that when chemicals are used in waters less than 20 metres deep, they pose some risks.

According to Phaitoon, the PTTGC boom was also shorter than is required, which explained why the spill spread. “If you ask me, PTTGC’s response was not the best,” Phaitoon said.