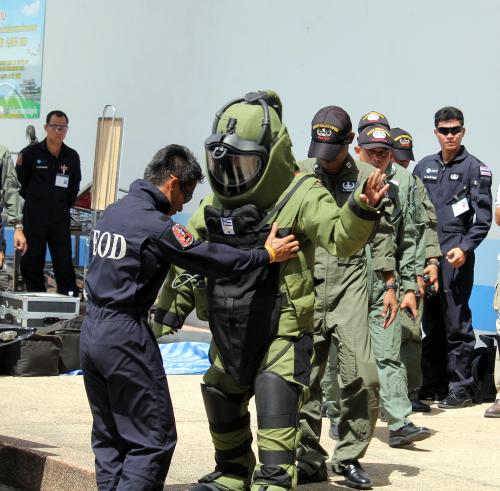 In the exercise, members of the Phuket Explosive Ordnance Disposal (EOD) unit and Airports of Thailand (AoT) staff short-circuited one bomb with a high-pressure water device, responded to a “fire” when a second was detonated, and cared for “injured” participants.

When the first “bomb” was found in the parking lot in front of Terminal 2, the public was evacuated from the area and an officer in full bomb-detonation gear sprayed it with high pressure water to short-circuit its electrical system, explained Phuket Governor Maitri Inthusut, on hand to oversee the event.

The action continued when a second object “exploded”, causing a simulated fire. Firemen battled the colorful smoke from the “blaze” while rescue workers were called in to tend to the “injured” and transport them to hospital.