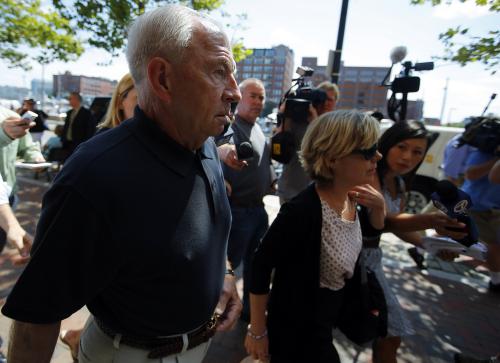 
Whitey Bulger guilty of 11 murders in sweeping Boston mob case
Reuters / Phuket Gazette
PHUKET: James “Whitey” Bulger, a brutal gangster who ruled over Boston’s criminal underworld in the 1970s and ’80s and evaded capture for 16 years, was found guilty of murder and racketeering by a jury on Monday and will likely spend the rest of his life in prison.

The 83-year-old Bulger, dressed in a gray shirt, dark pants and white sneakers, stood quietly as the verdict was read, showing little emotional response to the decision by jurors to convict him after five days of deliberation in Boston federal court. His sentencing was scheduled for November 13.

A legendary figure in Boston’s underworld, Bulger ran the “Winter Hill” crime gang after coming to power in a mob war that resulted in the death of members of rival gangs. He cemented his grip on Boston’s crime scene through ties with corrupt Federal Bureau of Investigation officials who shared his Irish ethnicity and turned a blind eye to his crimes in exchange for information they could use against the Italian Mafia.

During the two month-long trial, the 12 jurors heard vivid descriptions of Bulger’s crimes. They included brazen daylight shootings of fellow criminals, the terrifying extortion of a victim at whose crotch Bulger aimed a machine gun and how one associate would pull teeth from the mouths of dead victims, hoping to make the bodies harder to identify.

Nicknamed “Whitey” because of the shock of light-coloured hair he had as a young man, Bulger fled Boston in 1994 after a tip from a corrupt agent that his arrest was imminent.

He spent 16 years on the run, many of them on the FBI’s “Ten Most Wanted” list along with 9/11 mastermind Osama bin Laden until May 2011 when bin Laden was killed. Agents caught up with Bulger in June 2011, living in a seaside Santa Monica, California apartment.

The jury convicted him of all but one of 32 criminal counts.

“Thirty-one out of thirty-two counts in such a complicated case covering such a long period of time is a fabulous result for the government,” said Michael Kendall, a former federal prosecutor in Boston who is now with the law firm McDermott Will & Emery. “He’s going to go to jail for the rest of his life.”

Defence attorney J.W. Carney told reporters afterward that his client was pleased by the outcome, and noted that Bulger had avoided the death penalty. That would have been a possibility if he had been tried on state charges in Oklahoma or Florida, where two of the murders were committed.

“This trial has never been about Jim Bulger being set free,” he said. Carney said that from the moment FBI officials arrested Bulger, his client knew “he was going to die behind the walls of a prison or on a gurney, getting injected with a chemical that would kill him.”

Bulger’s lawyers, who on the first day admitted their client was a drug dealer, extortionist and loan shark and later described him as an “organized criminal”, mounted an atypical defence, rarely directly addressing many of the charges.

Most of their efforts focused on denying prosecutors’ assertion that Bulger had served as an FBI informant, or “rat,” for more than a decade. On Monday, Carney called that assertion a “myth.”

Carney said he planned to appeal the conviction, citing a claim by Bulger that he had a deal with federal prosecutors that gave him immunity for his crimes. Carney said he would appeal on those grounds, but he did not discuss a reason Bulger would have been given an immunity deal.

He reiterated his earlier assertion that Bulger had never been an informant. Bulger has contended that he paid a corrupt FBI agent for tips but provided none of his own.

Before the trial began, U.S. District Judge Denise Casper had told Carney that he could not argue immunity, saying no deal that allowed a person to commit murder without consequence would be legally valid.

Bulger declined to take the stand during the trial and told the court earlier this month, “As far as I’m concerned … this is a sham and do what you want with me.”

The jury found Bulger guilty of 11 of the 19 murder charges. They decided prosecutors had failed to prove their case in murders that dated back to a 1970s turf war with another organization, the Notorangeli gang. The victims included members of that gang and people who were killed by accident in botched hits who had nothing to do with the gangs.

The jury reached no finding in the death of one woman, Debra Davis, a girlfriend of Bulger associate Stephen “The Rifleman” Flemmi. Flemmi testified at the trial that Bulger strangled Davis in a South Boston house after she learned of their dealings with the FBI. Other witnesses had testified that Flemmi actually killed Davis with Bulger present.

The murders were part of a racketeering count that was the most complicated jurors had to decide. They needed to find he committed just two of the 38 crimes contained in that count for their guilty verdict.

Relatives of Bulger’s victims, who had been a constant presence at the waterfront courthouse during the trial, poured out onto the street after the verdict to tell their stories.

Steve Davis said he was at peace with the jury not reaching a finding on the murder of his sister, Debra.

“I don’t feel that he hands-on himself killed my sister, but I do know that he was guilty of conspiring or taking part of the whole thing,” Davis said. “But a no-find is better than a not guilty.”

William O’Brien was angry after the jury found that the government had not proven its case in his father’s 1973 murder.

“That prosecution dropped the ball,” said O’Brien, who shares his father’s name. “Five minutes they spent talking about his murder. That jury should be ashamed of themselves.”

The jury found Bulger not guilty of only one criminal count of extortion.

Carney said that Bulger was glad to have his story told at trial. “At the end of a person’s life, when people think he is the only bad person in the courtroom, it’s important to show that that’s not true,” he said.


Dalai Lama’s China site hacked, infects others
Reuters / Phuket Gazette
PHUKET: A prominent computer security firm warned that the Dalai Lama’s Chinese-language website has been hacked and is infecting visitors’ computers with viruses in what may to be an effort to spy on human rights activists who frequently visit the site.

Kaspersky Lab researcher Kurt Baumgartner told Reuters on Monday that he is advising web surfers to stay away from the Chinese-language site of the Central Tibetan Administration, or CTA, until the organization fixes the bug. He described the attack on his company’s blog: https://bit.ly/16LuBoP.

Technical evidence suggests the group behind the campaign was also responsible for previous breaches on that site as well as attacks on groups that focus on human rights in Asia, Baumgartner said.

Those breaches involved a two-stage attack technique known as “water holing,” where hackers first infect a site that is frequently visited by people whose computers they want to cont