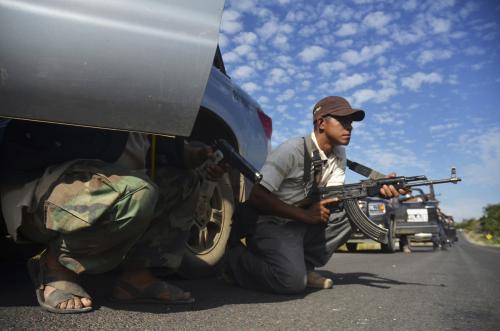 
Mexico vigilantes refuse to lay down arms in troubled state
Reuters / Phuket Gazette
PHUKET: Vigilante groups battling a powerful drug cartel in a troubled region of Mexico on Tuesday rejected a government call to lay down their arms, raising the risk of an increased security headache for President Enrique Pena Nieto.

On Monday, Mexico’s Interior Ministry ordered the heavily armed vigilantes to cease fighting the Knights Templar gang in the western state of Michoacan, where violent confrontations have converged on the city of Apatzingan in the last few days.

Apatzingan is considered a stronghold of the Knights Templar, and over the past week, so-called self-defense groups have pushed to take control of surrounding towns and villages.

The violence in Michoacan has raised serious questions about the government’s efforts to restore order in Mexico, where more than 80,000 people have been killed in turf wars between gangs and in their clashes with security forces over the past seven years.

Jose Mireles, the most visible leader of the vigilantes, said there could be no talk of putting down guns in Michoacan while the leaders of the Knights Templar remain at large.

“I am not in favor of disarmament, quite the contrary,” he said on a video posted on the Internet.

Estanislao Beltran, another leader of the vigilantes, told Mexican radio that to disarm would be to put themselves at risk.

“It’s not right for the federal government to come and disarm our soldiers … who are defending the people,” he said, adding that federal troops had strafed a local village with bullets, killing four people, including a girl of 11.

The deaths could not be confirmed immediately.

Already battling the Knights Templar, the government risks opening up another front if the vigilantes refuse to disarm, complicating efforts to restore order in Michoacan.

“There’s no question that this is the first in-depth test to see if (Pena Nieto) has a strategy to tackle organized crime,” said Javier Oliva, a political scientist at the National Autonomous University of Mexico (UNAM).

Pena Nieto has tried to shift attention away from the violence after his predecessor Felipe Calderon staked considerable political capital on rooting out the cartels.

His government killed and captured dozens of senior gang members, but killings intensified and helped condemn Calderon’s conservatives to defeat in the 2012 presidential elections.

The mounting violence in Michoacan has made it harder for Pena Nieto’s government to maintain a low profile on security.

On Tuesday, convoys of federal police in reinforced pick-up trucks headed along the highway towards Tierra Caliente, or Hot Land – an arid part of Michoacan where the fighting has been most intense.

In the back of each truck, police manned mounted machine guns, their faces obscured with balaclavas and goggles. Some had heavy bandoliers slung around their torsos.

The government had appeared to tolerate the vigilantes, apparently in the hope they could oust the Knights Templar. Militia leader Mireles himself received protection from federal troops after surviving an airplane accident earlier this month.

However, some Michoacan locals say the vigilantes have been infiltrated by drug cartels from neighboring states, so that the government risks replacing one criminal gang with another.