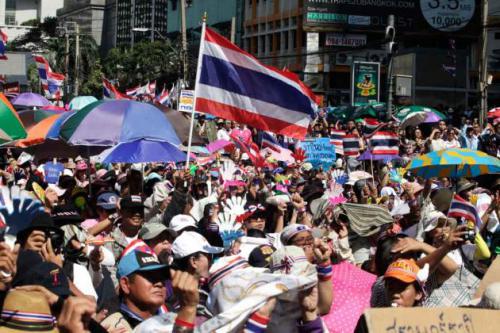 
AeroThai and SET are in protesters’ sights
The Nation / Phuket Gazette
PHUKET: In an attempt to increase pressure on the government, the hard-line movement Students and People Network for Thailand’s Reform (STR) yesterday confirmed it planned to blockade the Stock Exchange of Thailand and the offices of Aeronautical Radio of Thailand (AeroThai) if caretaker Prime Minister Yingluck Shinawatra did not resign.

STR coordinator Uthai Yodmanee said the group would wait until 8pm tonight – its deadline for Yingluck to step down.

“If Yingluck does not resign by then, the STR will block the stock market and the Aeronautical Radio of Thailand office,” he said, adding that STR leaders were designing a strategy on how to blockade the two places.

Any disruption of AeroThai’s services could cause chaos for civilian aircraft, including domestic and international passenger flights, scheduled to land in Thailand, as well as those flying through Thai airspace, Uthai said.

STR was ready to rally at any alternative venue where cabinet members worked on behalf of the caretaker government, he said. “The STR will step up its efforts in a peaceful way,” he added.

Caretaker Transport Minister Chadchart Sittipunt said yesterday that if anti-government protesters occupied the Aeronautical Radio of Thailand compound as they have threatened, they would be charged with terrorism.

Police and soldiers had been mobilised to protect all operational bases of AeroThai, whose central command is located in Bangkok’s Thung Maha Mek area. The Stock Exchange of Thailand compound is located on Ratchadaphisek Road near the Queen Sirikit Convention Centre.

The president of AeroThai, Prajak Sajjasophon, said the agency’s operations were crucial to the safety of air passengers and international flights – so protesters should consider the country’s image before deciding to disrupt its services.

The main anti-government movement, the People’s Democratic Reform Committee (PDRC), which leads the anti-government efforts including the Bangkok shutdown campaign, yesterday reaffirmed it would not seize airports, key transportation systems or the stock market.

PDRC chief Suthep Thaugsuban yesterday declared a total shutdown of all state properties in the next few days, as well as the possibility of holding the prime minister and some Cabinet members captive to force her caretaker government to resign, to make way for a reform plan he had designed.

Speaking at a rally stage at the Asoke intersection, the PDRC chief said the capital would be occupied round the clock until protesters’ months-long street protests – of which the Bangkok shutdown campaign is a part – achieve their aims.

Suthep said he was approached by an unnamed individual yesterday morning and offered a postponement of the general election from February 2 to May 4, but he had snubbed the offer. “Government buildings will be completely shut down in the next few days. I will take the lead,” said Suthep.

PDRC spokesman Akanat Promphan said the committee had no plans to seize AeroThai, the train stations, the public transport system or the stock exchange.

“The PDRC wants the public to be minimally affected by its movement, and to leave them options for commuting,” he added.

If any PDRC ally decided to disrupt key transport systems, Akanat said, the group would negotiate with them and they would be unlikely to make any move beyond the PDRC’s resolutions.

About 1,000 protesters marched to the Office of the National Economic and Social Development Board, as they claimed that the PM’s secretary-general Suranand Vejjajiva would use the place to work. They blew whistles and urged officials there to stop work for five days. About 100 officials walked out of their office as protesters cheered and blew whistles. Having found no one left in the NESDB office, they closed the gate with a big lock.


Protesters urge govt workers to close down state agencies
The Nation / Phuket Gazette
PHUKET: The highlights of the second day of the “shutdown campaign” and its impact on the capital and provinces across the country were anti-government protesters’ campaign for civil disobedience:

About 1,000 protesters marched to the Office of the National Economic and Social Development Board, as they claimed that the PM’s secretary-general Suranand Vejjajiva would use the place to work. They blew whistles and urged officials there to stop work for five days. About 100 officials walked out of their office as protesters cheered and blew whistles. Having found no one left in the NESDB office, they closed the gate with a big lock.

• PDRC protesters laid siege to the Customs Department from morning till 6pm, urging them to stop work and join their campaign to oust the PM.

• Protesters marched to the Commerce Ministry in Sanambinnam Road but left after they were told it was closed for three days.

• Protesters marched to the Department of Export Promotion after learning the permanent secretary for the PM’s Office would use this place as his office. However, after learning that the protesters were marching there, the high-ranking official did not turn up.


Delay poll, hold reform forum: top Justice man
The Nation / Phuket Gazette
PHUKET: A second top official has called for the election to be set back and a forum organised to focus on political reform. He also urged the government to review its role as a caretaker administration.

The permanent secretary of Justice Kittipong Kittayarak posted on Facebook yesterday that the February 2 election should be postponed for three to six months, and a forum set up for all stakeholders to discuss a ballot that would lead to national reform.

Meanwhile, many parties have refused to join a meeting today being organised by the government to discuss problems about the election.

The Election Commission (EC) said yesterday it would not join a meeting of all parties hosted by the government today on the election and suggested a meeting with the government should take place first.

“The government and the Election Commission are the two responsible agencies, so we need agreement between us first,” Commissioner Somchai Srisuthiyakorn said.

He noted that the EC offered a meetin