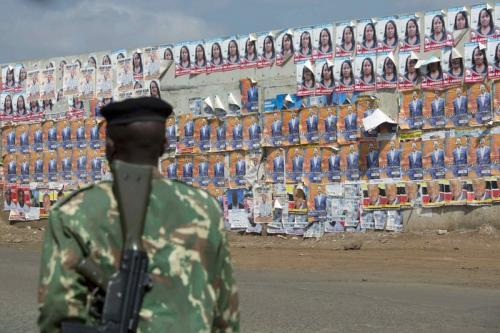 
Kenyans to vote in tense head-to-head presidential race
Reuters / Phuket Gazette
PHUKET: Kenyans vote today in a presidential election that will test whether the east African nation can restore its reputation as one of Africa’s more stable democracies after a lethal ethnic rampage erupted following the 2007 poll.

Outgoing President Mwai Kibaki, the candidates and civil society groups have all appealed for a peaceful poll after the disputed vote five years ago unleashed a wave of killing by rival tribes that lasted weeks and left more than 1,200 dead.

“I also make a passionate plea for all of us to vote peacefully. Indeed, peace is a cornerstone of our development,” Kibaki, barred from seeking a third five-year term, told Kenyans in a televised address before polling day.

Yet, as in 2007, the race has come down to a high-stakes head-to-head between two candidates, Prime Minister Raila Odinga and Deputy Prime Minister Uhuru Kenyatta, and once again both will depend heavily on votes from loyalists of rival tribes.

Though well ahead of six other contenders, polls suggest neither may be able to command enough ballots for an outright victory in the first round, which could set the stage for a tense run-off tentatively set for April 11. A narrow first round victory for either could raise prospects for legal challenges.

Kenya’s neighbours are watching nervously, after their economies felt the shockwaves when violence five years ago shut down trade routes running through east Africa’s biggest economy. Some landlocked states have stockpiled fuel and other materials.

The United States and other Western states are worried about the conduct of a poll in a state seen as a vital ally in the regional battle against militant Islam. Adding to election tensions, al Shabaab militants, battling Kenyan peacekeeping troops in Somalia, issued a veiled threat days before the vote.

But the West also frets about the result of the presidential race. One of the top candidates, Kenyatta, is indicted for crimes against humanity by the International Criminal Court.


Papal vote preparations start in earnest at Vatican
Reuters / Phuket Gazette
PHUKET: Preparations for electing Roman Catholicism’s new leader begin in earnest today as the College of Cardinals opens daily talks to sketch an identikit for the next pope and ponder who among them might fit it.

The idea is to have the new pope elected during next week and officially installed several days later so he can preside over the Holy Week ceremonies starting with Palm Sunday on March 24 and culminating in Easter the following Sunday.

The general congregations, closed-door meetings in the interregnum between a papacy and the conclave to choose the next one, will hold morning and afternoon sessions in an apparent effort to discuss as much as possible in a short time.

The list of challenges facing the crisis-hit Church could take weeks to debate, but the Vatican seems keen to have only a week of talks so the 115 cardinal electors – those under 80 – can enter the Sistine Chapel for the conclave next week.

High on the agenda will be Church governance after last year’s Vatileaks scandal exposed corruption and rivalries in the Vatican’s Curia bureaucracy. Cardinals expect to be briefed on a secret report to the pope on the problems it highlighted.

“We should know about some things we don’t have enough information about because of our work or the distance (from Rome),” Honduran Cardinal Oscar Rodriguez Maradiaga told Italian television.

Cardinal Daniel DiNardo, archbishop of Galveston-Houston in Texas, noted more than half the cardinal electors had been named since the now retired Pope Benedict was chosen in 2005 and had to find out how this most secretive of elections is conducted.

“Part of this is learning,” he told journalists. Cardinals over 80 can attend the general congregations and discuss issues with the electors, but not take part in the conclave itself.


Mexican president warns party over graft: No one is untouchable
Reuters / Phuket Gazette
PHUKET: Mexican President Enrique Pena Nieto on Sunday sounded a warning shot to his ruling party over corruption, saying no one is above the law as he tries to tackle the graft that has blighted its reputation in the past.

Speaking just days after the head of Mexico’s powerful teachers’ union was arrested on charges of embezzling around $200 million, Pena Nieto vowed a new era of transparency at a congress attended by some 4,200 members of his Institutional Revolutionary Party, or PRI.

“There are no untouchable interests,” said Pena Nieto, who pledged to break with the party’s past reputation for shady deals and patronage when he won the presidency last year. “The only interest I will protect is the national interest.”

Political analysts say the arrest of union leader Elba Esther Gordillo, herself a former PRI grandee, was a warning to any politicians or labour bosses involved in corruption.

However, the incident also raised fears that the PRI may be returning to past tactics of squashing dissent. Gordillo left the PRI several years ago and had opposed a new law being pushed by Pena Nieto to overhaul Mexico’s education system.

The PRI had become a byword for corrupt and often authoritarian rule by the time it was voted out of office in 2000 after a 71 years in power.

Pena Nieto, who is seeking to push through a raft of economic reforms in a bid to modernize the economy and boost growth, campaigned on a promise of a new PRI.

The party has updated its manifesto to include measures to foster transparency, including free access to information, which party members say applies in particular to economic issues.

“Today we are a more transparent party, open to the scrutiny of the people and being held to account,” Pena Nieto said. “Today the PRI has an instrument to distance itself from and reject those who are not up to the ethical standards of our party.”

“Let us demonstrate through our attitude, our voice, our actions that we are a new generation of the PRI.”

“If Romania and Bulgaria insist on a vote, the attempt will fail due to a German veto,” Friedrich was quoted as saying in Der Spiegel on Sunday.

“Even the idea of a partial approval i.e. for entry by air or seaports is off the table,” he added.

He said Bulgaria and Romania, which joined the EU in 2007, needed to tackle corruption more decisively and that German citizens would only accept an expansion of the Schengen area if the essential requirements were fulfilled, which he said was not currently the case.