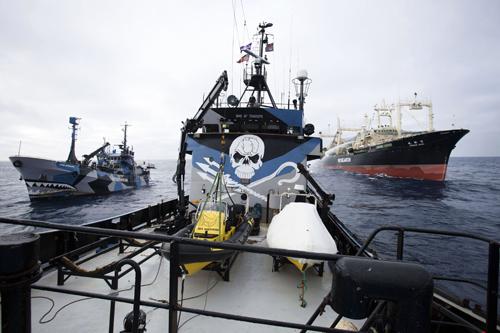 Protesters clash with Japanese whalers, call for naval intervention
Reuters / Phuket Gazette
PHUKET: Anti-whaling activists today called for Australia to send a naval vessel to the Southern Ocean after a confrontation in which they said a Japanese whaling ship collided with two of their protest vessels, damaging their flagship.

“The Nisshin Maru has rammed the Steve Irwin and the Bob Barker, but both vessels continue to hold their positions,” Paul Watson, the founder of the Sea Shepherd Conservation Society which runs the protest boats, said in a statement.

Watson also accused Japanese coastguard personnel of throwing concussion grenades at their protest ships during a confrontation in the frigid waters near Antarctica and said the Bob Barker was taking on water in its engine room.

Australia said it was confirming the report of the incident. Neither the Japanese government nor its whaling authority immediately responded to the Sea Shepherd’s account of the clash.

The Sea Shepherd group has clashed with the Japanese fleet for nine whaling seasons in the southern hemisphere summer, and has lost one of its ships, the high-speed trimaran Ady Gil which sank after a collision with a whaler in January 2010.

In the latest incident, the activists had been attempting to prevent an 8,000-tonne Japanese factory ship refuelling from a tanker when the collision occurred, Sea Shepherd director Bob Brown told journalists in the Australian city of Melbourne.

Brown, a former Australian Greens party leader before quitting politics, said the two Sea Shepherd ships had been repeatedly rammed and called on Australia’s government to despatch a naval ship to the area to calm the tension.

“It is illegal to be ramming ships in any seas anywhere on the planet. It is illegal for a tanker to be carrying heavy fuel oil into Antarctic waters under international law,” Brown said.

Australia sent an armed customs patrol ship to the Southern Ocean in 2008 to gather evidence of Japanese whaling methods for a legal challenge.

Australia has filed a complaint against Japan at the world court in the Hague to stop Southern Ocean scientific whaling. A decision could come this year.

“The government condemns so-called ‘scientific’ whaling in all waters and we urge everyone in the ocean to observe safety at sea,” Australia’s Environment Minister Tony Burke said in a statement.

Japan introduced scientific whaling to skirt a commercial whaling ban under a 1986 moratorium. It argues it has a right to monitor the whales’ impact on its fishing industry.

A U.S. appeals court in December issued an injunction ordering Sea Shepherd and Paul Watson not to physically attack or endanger the five-ship Japanese whaling fleet.