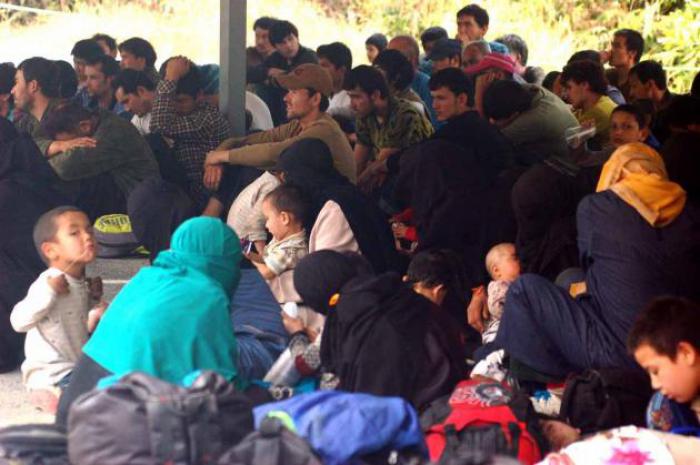 PHUKET: A group of 220 reportedly Muslim immigrants, whose nationality and origin was not known to Thai authorities as of press time yesterday, have been arrested at a rubber plantation in the southern province of Songkhla.

The police are unable to communicate with the group, which consists of 82 children, 78 men and 60 women, as they speak a tongue that has yet to be identified by Thai immigration and authorities. A Turkish-speaking interpreter was called in to interview them because it was initially believed that the group might hail from Turkey. The detainees were moved to an immigration office in Hat Yai district, before the women and children were moved to a shelter.

The women in the group were wearing hijab, with a netted opening for the eyes, while the men were found wearing casual attire. An immigration police officer noted that the group was comprised mostly of families and carried luggage like the sort used by normal international travellers. He added that their clothes were still clean, which possibly indicated that they had only just arrived in Thailand. He also said that they appeared to be Chinese looking.

Reporters’ also observed that the detainees were dressed in expensive-looking clothes and had sophisticated mobile devices.

“We are trying to check if they are Uighurs from China,” said Sunai Phasuk, Thailand’s representative for Human Rights Watch. Uighurs are a Muslim group from China’s Xinjiang province, whose language has Turkish roots.

Upon detaining the group, the authorities first provided them with food and water, along with medical assistance for those appearing unwell. Police initially thought they might be Rohingya boat people entering Thailand illegally from Myanmar.

Officials from the United Nations Head Commissioner on Refugees have been coordinating with the authorities to take care of the group, and have enlisted help from Arab speakers to try and communicate with the group. So far, no charges of illegal entry or criminal activities have been pressed on them.

A few men reportedly escaped when the police closed in on the group in response to an alert from local residents. No details were available about the escapees as of press time.

Immigration police commander Pol Maj-General Thawatchai Pitanilabutr, who led the inspection of the plantation, said several Rohingya were also being sheltered near the farm and police are checking to see if the two groups had anything in common in relation to their travel into Thailand.

Pol Lt-Colonel Paisith Sangkhahapong, director of the Department of Special Investigation anti-human trafficking centre, said the agency had not yet looked into the incident, hence it could not determine if it was related to a crime under its jurisdiction.

He said if the group hailed from Turkey, this would be the largest group of Turkish people travelling via Thailand. He went on to say that Thailand should not be a route for human trafficking from Turkey as there were other routes available via Europe.

PHUKET: Bureau projects Bt500 billion to give the next government more flexibility in investment plan; Pheu Thai shrugs off calls for govt to take responsibility for ‘unconstitutional’ loan bill

The national budget deficit is projected to hit Bt500 billion in fiscal 2015, double this year’s level, the Budget Bureau will propose to the next government, after the charter court ruled the current administration’s Bt2-trillion loan bill unconstitutional.

A deficit equivalent of 4 per cent of gross domestic product will likely be designed to accommodate the government’s investment plan more flexibly. This means the government will be able to raise loans of up to Bt500 billion.

Somsak Chotrattanasiri, budget director of the bureau, said yesterday that expenditure for 2015 would include some investments, part of the scrapped Bt2-trillion loan bill for infrastructure development, increasing the deficit for 2015 to Bt500 billion when compared with the Bt250 billion in 2014.

“How much the investment budget should be is up to the next government. But it will be on the condition that the borrowing will not exceed 20 per cent of the expenditure budget,” he said.

However, an increase in the deficit would defer the plan to balance the budget by 2017.

Somsak said the bureau has already prepared the estimated expenditure for 2015 before conferring with three other agencies – the Finance Ministry, the National Economic and Social Development Board, and the Bank of Thailand.

The expenditure budget for 2015 was proposed at Bt2.7 trillion, up Bt200 billion from this year.

In normal circumstances, the Cabinet would have passed the expenditure budget plan in May before seeking approval of the House of Representatives so as to become effective in October.

On Wednesday, the Constitutional Court voted 9-0 to rule that the content of the Bt2-trillion borrowing bill was unconstitutional. The judges voted 6-2, with one judge abstaining, over the bill being passed in procedural violation of the charter, after some ruling-coalition MPs voted with others’ identity cards.

Calls grew yesterday for the caretaker government to take responsibility for the court verdict against its borrowing bill.

Senator Paiboon Nititawan said the administration of Prime Minister Yingluck Shinawatra should take responsibility, as it was the government that had proposed the bill.

The anti-government People’s Democratic Reform Committee yesterday also made a similar call. PDRC spokesman Akanat Promphan said Yingluck and her government had yet to show any sense of responsibility for their proposed law being found by the court to be in violation of the Constitution.

“Yingluck has not only denied responsibility but also blamed others for the wrongdoing,” he said. “Still, she is calling for justice.”

The ruling Pheu Thai Party yesterday said the government did not need to take responsibility because the bill had already been approved by Parliament.

Pheu Thai spokesman Prompong Nopparit said the calls for the government to take responsibility were just a political game aimed at finding fault with the prime minister and her Cabinet.

PHUKET: Prime Minister Yingluck Shinawatra, facing an impeachment threat and the court defeat of her Bt2-trillion infrastructure loan bill, yesterday pleaded with her political adversaries to show her mercy and create a space for everyone to live together instead of trying to corner her with legal weapons.

“If you are going to use laws to hunt us down every day, how can we find peace in this country?” she asked with a strained voice.