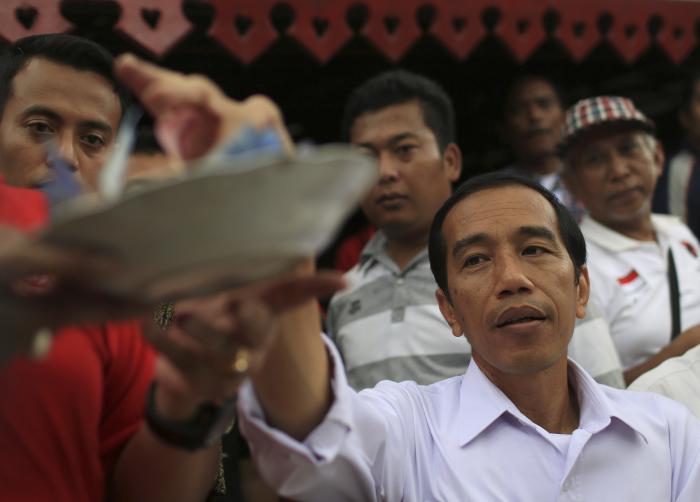 PHUKET: Indonesians began voting for a new parliament on Wednesday in an election likely to be dominated by the opposition Indonesian Democratic Party-Struggle (PDI-P), which it turn should give a further boost to its popular presidential candidate.

Opinion polls predict the PDI-P will win the most votes although not an outright majority. Its candidate for the presidential election on July 9, Jakarta governor Joko Widodo, widely known as Jokowi, already looks unbeatable.

The Indonesian stock market, which is up 15 percent this year, should react positively to a strong PDI-P showing, Trimegah Securities said. It expects a larger share of votes to allow the party to introduce more business certainty under a Jokowi presidency.

Campaigning has been notable for its lack of policy initiatives to give Southeast Asia’s biggest economy a boost. Growth has weakened partly on the fall in prices for commodities on which the resource-rich country still depends, although it is still expected to be a little over 5 percent this year.

Voting in the world’s third-largest democracy began in Indonesia’s distant eastern islands and will finish two time zones away in the densely populated west at 0700 am BST. Exit polls should give an idea of the outcome fairly soon afterwards.

Indonesia’s embrace of democracy since the downfall of former authoritarian leader Suharto 16 years ago has seen four different presidents and repeated change of the leading party.

Political parties must secure at least 25 percent of the national vote on Wednesday or 20 percent of the 560 seats in parliament to be able to field a candidate in July’s presidential ballot. There are only 12 parties running compared with 38 in the last election in 2009.

Much of the debate has shifted already to who might become the vice-presidential candidate with Jokowi, who has no experience on the national political stage.

According to a Roy Morgan International survey released a week ago, support for Jokowi jumped to 45 percent after PDI-P named him as its candidate last month, from 35 percent before. Jokowi has won admirers for his clean reputation in a country of rampant corruption and his common touch with ordinary people.

Support for PDI-P was at 37 percent, it said. A separate survey showed support for both Bakrie’s Golkar and Prabowo’s Gerindra parties dwindling to less than 20 percent.

Backing for the ruling Democratic Party of outgoing President Susilo Bambang Yudhoyono has fallen to single digits after it was hit by a series of high-profile graft cases last year. Yudhoyono is limited by the constitution to two terms.

Islamic parties, which became popular after the fall of Suharto, have also seen their fortunes fade in the world’s most populous Muslim nation, hit by corruption scandals and a strong focus on pluralism in mainstream politics. Five Islamic parties are running this time, compared with eight in 2009.

Rather than policy, the colourful mass rallies of the past few weeks offered free merchandise, food and quite often money to those who attended, along with scantily clad singers and dancers who sought to whip up enthusiasm.

Parties also tapped into Indonesia’s obsession with social media by launching politically themed apps and online games. Indonesia is home to the world’s third-largest number of Facebook and Twitter users.

The election, a $1.5 billion (896 million pounds) logistical feat, will see more than 186 million voters flock to half a million polling stations across the vast Indonesian archipelago, according to the election commission.

Voters, nearly a third of them under 30, will choose between 6,600 candidates vying for national parliament seats. On the same day, elections will be held for 19,007 provincial and district level legislative assembly seats.

Most Indonesians view the national parliament as among the country’s most corrupt institutions, according to a 2013 Transparency International survey.

It operates, however, within a presidential system where the executive branch has the authority to overrule it.