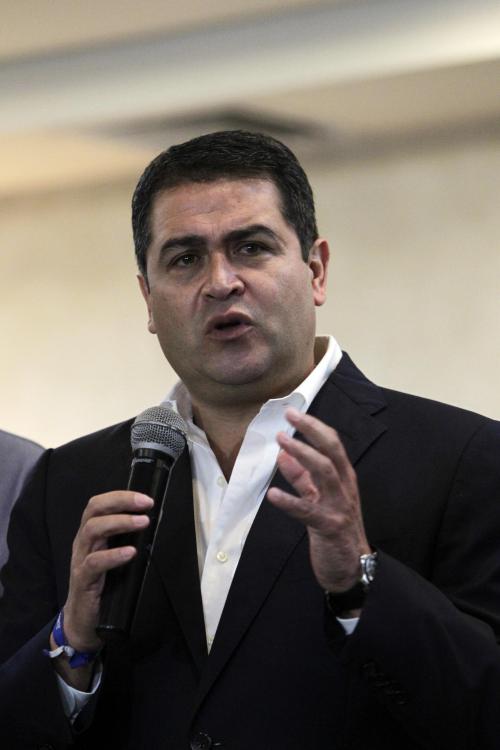 Castro, the wife of deposed leader Manuel Zelaya, and her team said early Monday that an exit poll drawn up for her party showed she was winning. They claimed fraud and accused the electoral authority of manipulating the result.

A partial count issued by the electoral authority gives National Party candidate Juan Hernandez some 34.19 percent support, while Xiomara Castro had 28.83 percent, the body said in an update on Monday.

The preliminary tally was based on a count from 58 percent of polling booths. An election official said vote count data from far-flung precincts were still arriving at the capital.

“We are going to defend our triumph at the ballot box and if necessary will take to the streets,” Zelaya said. “Until proven otherwise, we hold triumph in our hands.”

“We will seek a recount ballot box by ballot box, booth by booth, town by town,” Zelaya added. “We are struggling against an oligarchy in the government of Honduras.”

A group of about 500 supporters began the short journey from his camp to the Marriott Hotel, where the election tribunal is set to give its next vote count announcement on Monday afternoon.

The Marriott sits right by the presidential palace, and police officers, some in riot gear, blocked off the road before the hotel, setting the stage for a showdown. Neither Castro nor Zelaya were part of the march.

“The tribunal belongs to the National Party,” said Santos Aguilar, a 53-year-old salesman and Castro supporter. “We’re going to take the streets to defend our rights.”

Minutes before Zelaya made his comments, Hernandez said he would announce his transition team later in the day and was open to a rapprochement with Castro, but was not willing to debate the result.

“The triumph won’t be negotiated with anybody,” he told reporters. “The result is the one the Honduran people decided at the ballot box.”

Zelaya was ousted in a 2009 coup after his opponents accused him of trying to seek re-election, which is banned under the constitution. The debacle plunged Honduras into a deep political crisis and widened tensions between the left and the right in Latin America.

The deposed leader had hoped to stage a comeback behind his wife if she reached presidential office.

Honduras was a key ally of the United States during Central American civil wars in Nicaragua, El Salvador and Guatemala, and is the region’s No.1 coffee exporter.

“The result is being manipulated by the electoral tribunal to portray a reality we don’t accept,” Enrique Reina, Castro’s running mate, told Reuters late on Sunday.

However, the U.S. ambassador to Honduras and the head of the European Union’s election observers said the voting process was clean and urged the participants to respect the results.

Castro was first to claim victory on Sunday, citing an exit poll drawn up for her own party and telling cheering supporters: “I am the president.”

Hernandez posted a photograph on Twitter late on Sunday of himself and supporters praying on their knees. “Thanks to my God, and thanks to the people of Honduras for this triumph,” he wrote.

He has vowed a tough militarized response to drug gang violence that has earned Honduras the dubious distinction of having the world’s highest murder rate, or more than 85 killings per 100,000 people.

The mineral-rich but impoverished nation of 4.6 million people has descended into chaos since Seleka rebels, many of them from neighbouring Chad and Sudan, ousted President Francois Bozize in March.

Prime Minister Nicolas Tiangaye said French Foreign Minister Laurent Fabius had told him the reinforcements would arrive once the U.N. Security Council had voted on a resolution backing he force over the next week.

“We spoke about the security question. France has 410 soldiers now in Bangui and that will be strengthened by 800, to take the number to 1,200. More if needed,” Tiangaye told Reuters after meeting Fabius in Paris.

The U.S. State Department estimates that nearly 400,000 people have been displaced and 68,000 have fled to neighbouring countries since Seleka leader and interim president Michel Djotodia lost control of his loose coalition of warlords.

The violence has increasingly pitted Seleka’s mainly Muslim fighters against Christian militias. Christians make up half the population and Muslims 15 percent.

Tiangaye said the new troops would help secure the road from neighbouring Cameroon to the riverside capital Bangui, allowing supply trucks into the landlocked country.

The deployment was expected to begin in December after the passing of a Security Council resolution authorising French-backed African troops to intervene, Tiangaye said.

“What is unacceptable is that the situation has become worse and there are multiple crimes against humanity in the country and my concern is to put an end to this as quickly as possible,” he added.

Spinning out of control

Rights group Amnesty International warned on Monday that the Central African Republic crisis was spinning out of control.

“People are dying in the Central African Republic as we speak,” said Amnesty Secretary General Salil Shetty in a statement.

The African Union plans to deploy a 3,600-member peacekeeping mission, known as MISCA, in the country.

A draft resolution to authorize the AU force could be circulated among the 15 members of the Security Council as early as this week, U.N. diplomats said, ahead of the planned adoption in early December.

U.N. Secretary-General Ban Ki-moon this month said he had also ordered officials to start preparing for the likely deployment of a larger U.N. peacekeeping mission.

The initial strength of the force should be 6,000 troops and 1,700 police, with an option of increasing the size to 9,000 troops if the situation worsened, Ban added.

U.N. Deputy-Secretary-General Jan Eliasson told the 15-member Security Council on Monday that the transfer of MISCA to a U.N. peacekeeping operation would take some time.

“We therefore urge the international community to now support MISCA in as comprehensive and predictable manner as possible, but to also begin considering the option of a United Nations peacekeeping operation,” he said.