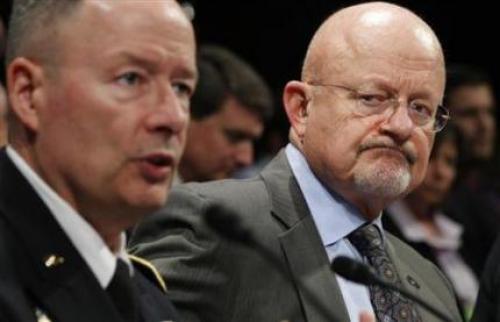 PHUKET: Heavy shooting from guns and anti-aircraft weapons could be heard early this morning in the Libyan capital Tripoli, Reuters witnesses said.

Fighting erupted between militias in the eastern Suq al-Juma area, said a militia source with government ties, adding that he had no further information.

A Facebook website showed what it said were two burned-out cars though Reuters could not verify its authenticity.

PHUKET: The U.S. government is open to some changes to how it conducts its phone and Internet surveillance programs as long as they do not undermine the programs’ effectiveness, U.S. officials told a privacy oversight board on Monday.

How exactly the U.S. phone and online data-gathering programs could strike such a balance – helping thwart terrorist plots while also protecting Americans’ privacy – is under review by the Privacy and Civil Liberties Oversight Board.

Established at the recommendation of the 9/11 Commission in 2004, the five-member board is an independent watchdog within the government’s executive branch. It is studying U.S. intelligence surveillance programs in light of recent disclosures that have raised concerns about lax privacy protections.

No timeline has been set for the board’s work, but ultimately it will issue a report to President Barack Obama and Congress on the legal standards now used for online and phone spying by U.S. intelligence agencies and what reforms may best ensure Americans’ privacy is protected.

“I think we’ve learned a lot about some potential reforms that the government was amenable to,” the board’s Chairman David Medine said on Monday after a public hearing with officials from the National Security Agency, FBI, Office of the Director of National Intelligence and Justice Department.

Medine said he saw some openness from government officials about updating some privacy protections for foreigners and changing how long the government keeps the records it collects.

U.S. classified phone and Internet surveillance programs are under growing scrutiny due to leaks by former NSA contractor Edward Snowden. Lawmakers are debating several proposed changes to the legal standards governing how much data the NSA gathers, how long it is kept and how it gets accessed.

PHUKET: The coffins of two French journalists killed in Mali last week were loaded onto a Paris-bound aircraft in the capital Bamako yesterday as French and Malian troops hunted for their killers.

Reporter Claude Verlon, 58, and radio technician Ghislaine Dupont, 51, who both worked for Radio France Internationale, were found dead in northern Mali on Saturday after being kidnapped in the city of Kidal.

In a solemn ceremony attended by the new Malian president, Ibrahim Boubacar Keita, soldiers carried the two coffins onto a military aircraft that was due to land in Paris on Tuesday morning.

Earlier, dozens of journalists accompanied by artists, politicians and residents walked in silence through the capital to the French embassy to mourn Verlon and Dupont.

“On Sunday, operations were launched to identify a number of people in camps, and they are ongoing,” Fabius told France’s RTL radio. “Suspects have been questioned.”

He declined to comment on French media reports that arrests had been made in camps where former rebels of the Tuareg rebel group MNLA are being held.

A Malian gendarme in Gao said he had no information about the arrests while the leader of the MNLA condemned the killings.

“We will invest fully in the search for the truth so that this mystery is resolved,” Bilal Ag Acherif, secretary general of the MNLA, said at a conference in Ouagadougou.

PHUKET: The mother of jailed U.S. missionary Kenneth Bae, who is serving a 15-year sentence for state subversion in North Korea, said that her son remained isolated and was desperate for contact to the outside world a year after he was first detained.

Myunghee Bae, in an op-ed published in the Seattle Times, provided details about her October visit to the Pyongyang hospital where her son, who is diabetic, was recovering from health ailments that saw him lose 50 pounds in three months.

“It pained me to see how starved he was for a connection to home and the outside world, alone and ailing in a foreign prison,” Bae wrote in the piece, published on Sunday. “I tried to reassure him that he was not forgotten.”

“He has been isolated for one year without anybody to talk to other than his guards and doctors. I could not imagine how hard that must have been for Kenneth, who has always been so outgoing and talkative,” she wrote.