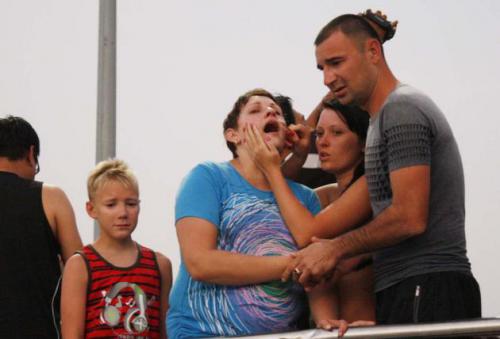 A ferry between the island and Pattaya capsized on Sunday evening, throwing its more than 200 Thai and foreign passengers overboard, before sinking. Six people died and 24 were injured.

As of press time, 10 were still receiving treatment at hospitals in Chon Buri.

Under an insurance policy taken out by the ferry owner, the financial compensation per death is up to Bt300,000, and medical coverage per victim is up to Bt115,000.

Ferry captain Samarn Khwanmueang, 48, turned himself in to police. He said the ferry hit submerged rocks.

Police have charged Samarn with recklessness leading to the deaths and severe injury of passengers. They say preliminary lab tests indicate Samarn might have abused drugs before the accident.

“If anything [bad] happens, someone must take responsibility,” he said.

According to some witnesses, pumps on the ferry did not function when the crew tried to drain seawater from the damaged vessel.

Marine Department director-general Sorasak Saensombat said an investigation was ongoing to determine the exact cause of the accident. He believed that the excessive number of passengers on the ferry and the limited safety equipment were among the likely causes of the loss of life.

The Marine Department convened a meeting of Pattaya-based ferry operators yesterday to press for strict compliance with safety regulations and to boost tourists’ confidence in ferry and other boat services.

In addition to the charges the ferry captain faces, Sorasak said authorities had already suspended his licence for six months. “We are in the process of considering whether we should cancel the licence of the involved ferry operator too,” Sorasak said.

Pattaya City Mayor Itthiphol Kunplome said that all the passengers and crew on board the boat were accounted for..

PHUKET: Opposition to the controversial amnesty bill spread across the country yesterday, as a diverse group of people and organisations joined a nationwide campaign against a bill that would absolve all law violators involved in political conflicts since 2004. That would include politicians convicted of corruption and serious criminal offences.

Given the rising opposition to the bill – rushed through the House of Representatives last Friday – most senators are now likely to vote against it goes to the Uppher House, Senator Paiboon Nititawan said yesterday.

The 149-member Senate is scheduled to begin its reading of the bill on Monday.

Paiboon, who claims to have sounded out many senators, estimates that as many as 90 senators are likely vote against the bill. He said 60 of them had “shown their intention to oppose the bill from the very beginning” and that 30 others agreed to “vote for the dignity of the Senate by rejecting the bill”.

He said the number could exceed 100 if public opposition against the bill remains strong.

If the bill is passed by the Senate and becomes law, it would pardon all crimes related to politics and some corruption cases committed between 2004 and 2013.

Thousands of people took to the streets in Bangkok yesterday, joining a march led by the opposition Democrat Party along the politically significant Rajdamnoen Avenue, while a lunch-break rally attracted a large crowd of mostly businesspeople and office workers on Silom Road in the heart of the capital’s business district.

Protest leaders of the Democrat-led rally yesterday decided to move their protest site from Samsen Railway Station to the Democracy Monument, sources said.

Officials gave contrasting information yesterday as to whether Democracy Monument was under the Internal Security Act, which was imposed by the Cabinet on October 9 and later extended to the end of this month. The National Security Council said it was, but Deputy Prime Minister Pracha Promnog, who is in charge of security affairs, said it was not.

The ISA has been in effect in eight sub-districts of the three Bangkok districts of Dusit, Phra Nakhon and Pom Prab Sattru Phrai.

Meanwhile, despite the loud opposition, Prime Minister Yingluck Shinawatra yesterday continued supporting the bill. With tears in her eyes, Yingluck called on all sides to forgive and forget.

“We must lend our hands in helping the country. The first thing to be done is to forgive one another so we can move forward,” she said. The prime minister made the call when members of 24 families whose relatives were killed during the 2010 political unrest came to meet her at Government House. This group expressed support for the government-backed amnesty bill.

The ruling Pheu Thai Party continued with its push for the law and remained confident that police would be able to keep the protesters under control. A Pheu Thai source said the strategy committee, led by party leader Charupong Ruangsuwan, had agreed yesterday to continue pushing for the blanket amnesty bill. Party MPs have been instructed to explain benefits of the law to their constituents, while some were tasked with lobbying senators to vote for the bill, the source said.

Many business organisations, as well as groups of academics, university students, social workers, medical professionals and lawyers expressed their opposition by issuing separate statements against the proposed law for blanket amnesty.

The Council of University Presidents of Thailand issued a statement yesterday, signed by rectors from the country’s 25 leading universities, expressing concern that the bill would create a bad precedent for Thai society. “There will be misunderstanding that corruption is not evil and the offenders may be absolved through an amnesty law. This