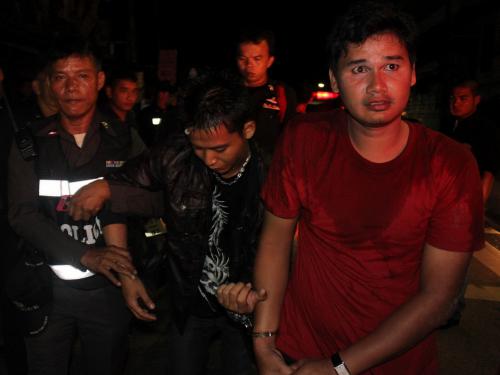 PHUKET: Two men who snatched a gold necklace from a 50-year-old woman on Sunday night were arrested after they accidentally waved down a police pickup truck to hitch a ride as they fled.

Both men reportedly worked as kitchen hands at the Royal Phuket City Hotel in Phuket Town.

Police began their search for the suspects after Pitchaniya Kladme, a reception manager at the Phuket Merlin Hotel, reported that two men on a motorbike had snatched her gold necklace as she waited on her motorbike at a red light near the Phuket Post Office on Montri Road at about 10pm.

“A resident there notified the police that two men were seen running into Bang Yai Canal, which runs alongside the street, so officers began searching the area,” he explained.

The two men were next spotted in front of Phuket Wittayalai School on Chumphon Road, where they waved down a pickup truck in the hope of hitching a ride as their getaway.

However, the pickup truck was a police patrol vehicle out scouring the streets in search of the two men.

“When they realized it was a police truck, they ran and hid in front of the school, but they didn’t get away,” Col Chao added.

The suspects were charged with theft by snatching and using a vehicle to flee the scene of a crime.

“They said they committed the snatching because they were drunk,” he added.