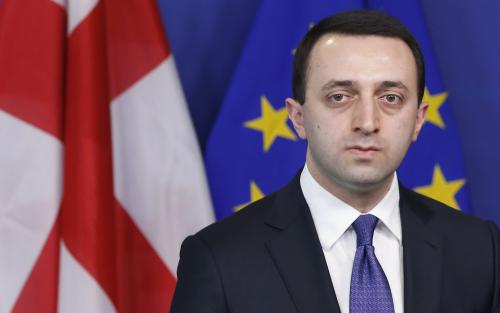 
Georgia says Russian pressure will not divert it from EU goal
Reuters / Phuket Gazette
PHUKET: Georgia is determined to sign a trade and cooperation agreement with the European Union by August and will not be pushed off course by Russian pressure as Ukraine was, Georgian Prime Minister Irakly Garibashvili said on Tuesday.

“Nothing will stop us … We see our future in the European Union,” Garibashvili told Reuters during his first visit to Brussels since he became prime minister in November.

The EU’s policy of strengthening ties with ex-Soviet states suffered a setback in November when Ukraine, under pressure from Russia, declined to sign a planned trade accord with the EU, opting for closer ties with Moscow instead.

Two months earlier, Armenia chose to join a customs union led by Moscow rather than pursue closer ties with the EU.

That left Georgia and Moldova as the only two ex-Soviet states to give preliminary backing to free trade agreements with the EU at a summit in Lithuania last November.

Some EU officials fear those countries could yet come under pressure from Russia to change their minds in the months before the agreements are signed.

Georgia and the 28-nation EU have agreed to sign their agreement no later than August, Garibashvili said.

Georgia, a country of 4.5 million people that lies on a crucial oil and gas transit route from the Caspian Sea to Europe, is less dependent on Russia than Ukraine, and Moscow’s leverage is not as great, Garibashvili said.

“We heard a number of concerns about the potential risks and threats or pressure coming from Russia (before the agreement is signed), and we heard many times that they compare Ukraine to Georgia. Well, Ukraine is a different story, it is an absolutely different story,” he said.

Russia has already exerted some pressure by installing barbed-wire fences last year on the border of Georgia’s breakaway province of South Ossetia, he said.

Garibashvili said Georgia was extremely concerned about developments in Ukraine, rocked by months of protests against President Viktor Yanukovich’s decision to spurn the EU, and that Ukraine’s tilt towards Russia should lead Europe to speed up the process of integrating Georgia with the EU.

He said he had discussed with EU leaders how to intensify economic cooperation both before and after Georgia signs the trade and cooperation pact which he hopes will be a stepping stone to Georgia’s goal of joining the EU one day.

A conference for potential investors in Georgia will be held in Brussels in June, he said, adding that the national economy should expand by 5-6 percent this year.

NATO promised eventual membership to Georgia in 2008, but the mood cooled after its war with Russia.

Garibashvili is an ally of billionaire Bidzina Ivanishvili, who quit as prime minister in November, saying his job was done now his rival Mikheil Saakashvili was no longer president.

The European Union has been worried by the arrest of several former ministers and other officials, including a former prime minister, and some fear Saakashvili could suffer the same fate now he has stepped down.

After talks with Garibashvili on Tuesday, European Council President Herman Van Rompuy said prosecutions must be “evidence-based, impartial and fully in line with democratic values”.

Garibashvili said the new Georgian government had never applied selective justice. He refused to give a guarantee that Saakashvili would never face any charges, however, saying “nobody is above the law”.