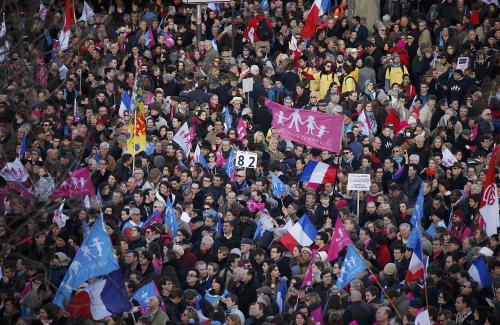 The government tried on Monday to reassure the protesters, who numbered over 100,000 in Paris and Lyon on Sunday, that the new law would not legalise assisted procreation for lesbian couples or surrogate motherhood for gay men who wanted children.

But when Socialist lawmakers insisted they would amend the planned bill to include those reforms, the government announced the draft law – which would also define the legal rights of step-parents in second marriages – needed more work.

“The government will not submit a family reform bill before the end of the year,” the prime minister’s office said.

Sunday’s protesters, many of the Catholics but also some Muslims, tapped continued resentment against the legalisation of gay marriage last year to pressure the government not to go further and allow ways to help gays have their own children.

Protest leaders accused the government of “family-phobia” and said government assurances the family law would not include those reforms were lies. French law only allows assisted reproduction for married couples with infertility problems.

The government’s retreat showed that, with President Francois Hollande’s popularity near rock bottom and municipal elections coming up next month, it is eager to avoid further conflicts with increasingly frustrated centre-right voters.

One of Hollande’s aides told journalists the priority was instead fighting near-record unemployment and pushing through a tax break scheme meant to get companies hiring again.

Hollande reaped criticism from the right and the left for the decision to postpone the family bill.

Christian Jacob, parliamentary leader of the conservative opposition UMP party, said “the government has gone from a mess to a panic” and urged it to scrap the family law entirely.

Noel Mamere, a Greens deputy allied to Hollande’s Socialists, accused the government of caving in to “reactionaries” and the postponement of the family law “shows the great fragility and vulnerability of this government.”

These families were joined on Sunday by others firmly opposed to new gender equality lessons in state primary schools that they say will confuse their children’s sexual identity by teaching so-called gender theory.

Interior Minister Manuel Valls further angered them in comments on Sunday that lumped them together with violent far-right radicals and anti-Semites who protested a week ago.