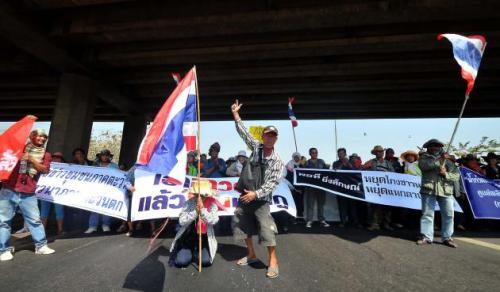 PHUKET: Farmers will appeal to His Majesty the King on Thursday over their plight resulting from overdue payments owing from the rice-pledging scheme.

A farmer leader, Prakasit Jaemjumrat, said the group was gathering names and signatures of affected farmers in Phichit, Phitsanulok, Kamphaeng Phet and Nakhon Sawan to submit a petition to the Royal Household Bureau on Thursday.

They said after all previous attempts to gain attention, including road blockades, their complaints had fallen on deaf ears. Prakasit said that Phichit province alone saw the caretaker government owing Bt7.5 billion in pledged rice payments to 40,000 farmers.

Farmers’ representative Ravee Rungreung said if the caretaker government wouldn’t send a representative to negotiate with them, they would continue the road blockage – for months if needed – until they were paid. Apologising to motorists for the inconvenience, he said the farmers were severely affected and had run out of solutions to get the caretaker government’s attention on the issue.

Some 500 farmers from Phichit, Nakhon Sawan, Khamphaeng Phet, Sukhothai and Phitsanulok blocked one Bangkok-bound lane of a road in front of the Bank for Agriculture and Agricultural Co-operatives (BAAC)’s Bung Na Rang branch in Phichit yesterday, calling for the pledged rice payments. The group said this would be their final battle to get answers about pledged rice payments from the caretaker government.

The farmers at the rally also registered and submitted their documents for the royal petition. Ang Thong agriculture council president Songpol Pulsawat said that a letter from Ang Thong farmers to the caretaker government – via the provincial governor on January 22 – for the overdue payments to be paid by January 31, hadn’t seen any progress. As a result, the farmers would block a main road in the province on February 6.

PHUKET: The caretaker Commerce Ministry will try to release 500,000 tonnes of rice from its stockpiles via auction next week, while Minister Niwatthumrong Boonsongpaisan says he has approved the sale of another 860,000 tonnes.

This is to ensure that the government will earn additional of Bt10 billion this month to fund the rice-pledging project. It has come under heavy pressure from farmers over delayed payments for their crops, but faces restrictions on fund-raising because of its caretaker status.

Niwatthumrong said the ministry had already returned Bt180 billion to the Bank for Agriculture and Agricultural Cooperatives, which is responsible for financing the programme.

The ministry has also drawn up a plan to sell rice to the Philippines after Vietnam just won a bid with Manila to supply 500,000 tonnes of rice.

Krungthai Bank’s board yesterday refuted “misleading” reports on social networks that it would provide loans for the rice-pledging project.

Payungsak Chartsutipol, chairman of KTB’s board of executive directors, said he had not received any proposal from bank president Vorapak Tanyawong on this matter. Vorapak has also previously denied rumours that KTB’s board would consider such a loan.

Though it is a state-owned bank, KTB is a listed company and regulated by the Bank of Thailand, and therefore will comply with the law and good-governance practices, Payungsak said.

He also denied that caretaker Finance Minister Kittiratt Na-Ranong had ever asked him about a loan for the project, and pointed out that no news on this matter had reached him yet because it had to pass through management.

“Whatever agenda the board discusses will be proposed by the management, and the board meeting [on Tuesday] will contain a normal agenda,” he said.

Meanwhile, the Public Debt Management Office cancelled a meeting scheduled for yesterday with financial institutions to discuss the legal issues in regard to loans for the pledging project.

The Office of the Auditor-General on Friday warned Kittiratt that the government should strictly comply with the law in regard to funds for the rice-pledging scheme, according to the Isara news agency.

“The office was worried [about] operations of the government and related agencies involving the rice-pledging project. Securing funds to pay for paddy pledged in the 2013-14 main crop would have to comply with the law and not be against the Constitution. If the action of seeking funds is found to breach the law, those who approve [such action] or who are involved with the action will take responsibility for damages that may occur,” Isara said, citing the office’s letter to the caretaker finance minister.

In another letter dated January 30 to caretaker Prime Minister Yingluck Shinawatra, the office said the government should consider suspending the pledging project for the next crop after problems had been found with every process of the scheme, resulting in several hundreds of billions of baht in revenue losses.

PHUKET: A prolonged political conflict would dampen Thai economic growth, shaving up to Bt240 billion off gross domestic product (GDP) and causing the country to lag behind its neighbours, a private-sector group warned yesterday.

Meanwhile, other Southeast Asian countries such as Indonesia, Vietnam and Cambodia are expected to enjoy GDP growth of 5-6 per cent this year.

The Joint Standing Committee on Commerce, Industry and Banking said a political vacuum in the first half of this year due to the unresolved political conflict would have a profound impact on the growth of Thailand’s economy. This would be due to a lack of stimulation from the government, a slowdown of domestic investment and consumption, and decreased investor confidence due to higher risks, leading to missed opportunities for new investment.

The group, which includes members of the commerce, industry and banking sectors, convened its meeting yesterday.

Payungsak Chartsutipol, chairman of the Federation of Thai Industries, said the committee estimated that if the political conflict is prolonged, the Thai economic growth rate would be 1.5 to 2 percentage points lower than the previous forecast of 5 per cent. If it lasts