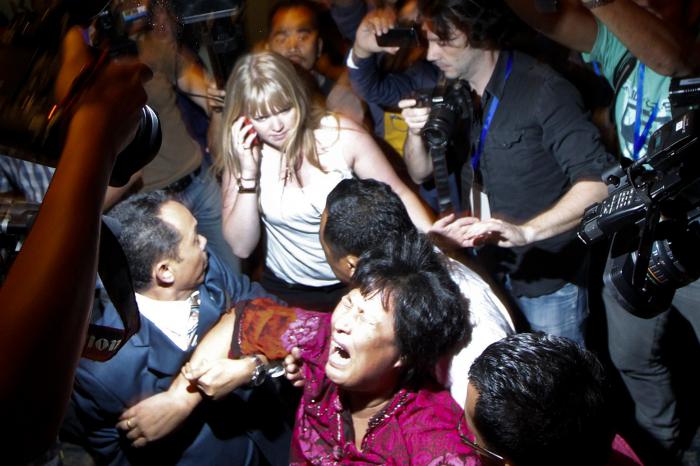 PHUKET: Chinese relatives’ anger over sparse information on the fate of their loved ones on board a missing Malaysian airliner sparked chaotic scenes on Wednesday at the headquarters of an increasingly deadlocked search operation.

Malaysia’s transport minister ordered an inquiry after security guards carried out the distraught mother of a passenger on Malaysia Airlines Flight MH370 from a briefing room where she had protested about a lack of transparency, 12 days after the plane vanished.

“Malaysia is doing everything in its power to find MH370 and hopefully bring some degree of closure for those whose family members are missing,” he said in a statement.

Prospects that a 26-nation operation would lead to quick results appeared to be dwindling, however, as investigators confirmed they were focusing on the remote southern Indian Ocean after failing to find any traces of the jet further north.

“Our top priority is being given to that area,” Hishammuddin told the news conference, confirming an earlier Reuters report.

No wreckage has been found from Flight MH370, which vanished from air traffic control screens off Malaysia’s east coast at 1:21 a.m. local time on March 8 (1721 GMT March 7), less than an hour after taking off from Kuala Lumpur bound for Beijing.

An unprecedented search for the Boeing 777-200ER is under way in two vast search “corridors”: one arcing north overland from Laos towards the Caspian Sea, the other curving south across the Indian Ocean from west of Indonesia’s Sumatra island to west of Australia.

“The working assumption is that it went south, and furthermore that it went to the southern end of that corridor,” said a source close to the investigation.

The view is based on the lack of any evidence from countries along the northern corridor that the plane entered their airspace, and the failure to find any trace of wreckage in searches in the upper part of the southern corridor.

Some sources involved in the investigation have voiced fears it could be drifting towards deadlock due to the reluctance of countries in the region to share militarily sensitive radar data that might shed new light on the direction the jet took.

Two people familiar with the probe said the search had been hampered in some cases by delays over the paperwork needed to allow foreign maritime surveillance aircraft into territorial waters without a formal diplomatic request.

“These are basically spy planes; that’s what they were designed for,” said one source close to the investigation, explaining the hesitance of some nations to give blanket permission for other countries to scour their waters.

Hishammuddin confirmed that some assets that could be involved in the search were waiting for diplomatic clearance.

“The search for MH370 involves diplomatic, technical and logistical challenges,” he told the news conference, held in a Kuala Lumpur airport hotel that has served as a temporary crisis coordination centre and a base for dozens of news organizations.

Malaysia has come under the spotlight for its handling of the crisis, but insists it is directing smoothly what it believes to be the largest peacetime search and rescue effort.

China has called on Malaysia to speed up and expand the search operations during an episode that has tested relations between the peninsular nation and Asia’s largest power.

Malaysian and U.S. officials believe the aircraft was deliberately diverted perhaps thousands of miles off course, but an exhaustive background search of the passengers and crew aboard has not yielded anything that might explain why.

If it did indeed end up in the southern Indian Ocean, one of the remotest places on Earth and also one of the deepest seas, it increases the chance it may never be found – and investigators may never know for sure what happened on board.

Hishammuddin said the difficulty of searching such a huge expanse of ocean made the operation in the southern corridor “much more challenging”.

Officials believe that someone with detailed knowledge of both the Boeing 777 and commercial aviation navigation switched off two vital datalinks: the ACARS system, which relays maintenance data back to the ground, and the transponder, which enables the plane to be seen by civilian radar.

The source close to the investigation said that it was thought “highly probable that ACARS was switched off prior to the final verbal message” received for the cockpit.

That message, an informal “all right, good night” radioed to Malaysian air traffic controllers to acknowledge their handover of the plane to Vietnamese airspace, was believed to have been spoken by the co-pilot, the airline said earlier this week.

After that, ephemeral pings picked up by one commercial satellite suggest the aircraft flew on for at least six hours. The data from the satellite placed the plane somewhere in one of the two corridors when the final signal was sent at 8:11 a.m.

Hishammuddin said the latest in a series of reported possible sightings of the plane, this time over the Maldives, had been investigated and had been determined to be untrue.

The methodical shutdown of the communications systems, together with the fact that the plane appeared to be following a planned course after turning back, have been interpreted as suggesting strongly that foul play, rather than some kind of technical failure, was behind the disappearance.

Police have searched the homes of the 53-year-old pilot Zaharie Ahmad Shah and co-pilot Fariq Abdul Hamid, 27. Among the items taken were a flight simulator Zaharie had built in his home.

Malaysia’s police chief, Khalid Abu Bakar, said an examination of the flight simulator showed its data log had been cleared on February 3. “The experts are looking at what are the logs that have been cleared,” he told the news conference.

U.S. and other security services have analysed passengers but have come up with no connections to terrorism or possible criminal motives, two sources close to the investigation said.

Malaysian officials said all countries whose citizens were on the jet had run background checks except Ukraine and Russia.

China has said there is no evidence that Chinese passengers, who made up over two-thirds of those on board, were involved in a hijack or act of sabotage.

It has shrunk its search field based on satellite tracking data and analysis of weather and currents, but it still covers an area of 600,000 sq km (230,000 sq miles), roughly the size of Spain and Portugal.

Because of its size, scale of human loss and sheer uncertainty over what happened, the airliner looks set to establish itself as one of the most baffling tra