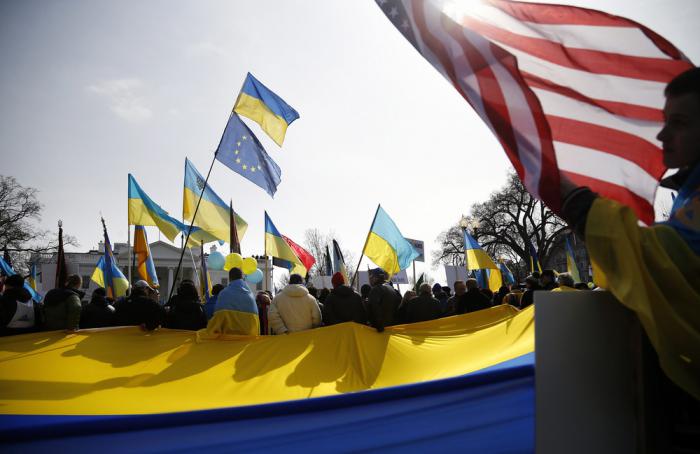 PHUKET: Crimea’s parliament voted to join Russia on Thursday and its Moscow-backed government set a referendum in 10 days’ time in a dramatic escalation of the crisis over the Ukrainian region that drew a sharp riposte from U.S. President Barack Obama.

Obama ordered sanctions on those responsible for Moscow’s military intervention in Ukraine, including bans on travel to the United States and freezing of their U.S. assets.

He echoed European Union leaders and the pro-Western government in Ukraine in declaring that the proposed referendum would violate international law.

The sudden acceleration of moves to bring Crimea, which has an ethnic Russian majority and has effectively been seized by Russian forces, formally under Moscow’s rule came as EU leaders held an emergency summit groping for ways to pressure Russia to back down and accept mediation.

The EU condemned Russian actions in Crimea as illegal, voiced support for Ukraine’s territorial integrity but took only minor steps suspending talks with Moscow on visas and a new investment pact while warning of tougher steps if there is no negotiated solution within a short period.

In a signal to Moscow, Obama announced plans to punish Russians and Ukrainians involved in what he called “threatening the sovereignty and territorial integrity of Ukraine”. A U.S. official said Russian President Vladimir Putin was not on the list of those to be sanctioned.

“The proposed referendum on the future of Crimea would violate the Ukrainian constitution and violate international law,” Obama told reporters at the White House. “Any discussion about the future of Ukraine must include the legitimate government of Ukraine.”

“We have agreed to stay in close touch in order to see if there is a way forward to try to get to a negotiating table to get the parties necessary to be able to stabilize this,” Kerry said.

Kerry said the executive order on sanctions signed by Obama on Thursday provided a legal framework for imposing sanctions but also left open the door for dialogue over Ukraine.

The Pentagon meanwhile announced a large-scale air force exercise in Poland which Washington’s ambassador to Warsaw said had been augmented to reassure U.S. allies in the region in the light of the Ukraine crisis.

The crisis began in November when Ukrainian President Viktor Yanukovich, under Russian pressure, turned his back on a trade deal with the EU and accepted a $15 billion bailout from Moscow. That prompted three months of street protests leading to the overthrow of Yanukovich on February 22.

Moscow denounced the events as an illegitimate coup and refused to recognise the new Ukrainian authorities.

The decision, which diplomats said could not have been made without Putin’s approval, raised the stakes in the most serious east-west confrontation since the end of the Cold War.

The vice premier of Crimea, home to Russia’s Black Sea Fleet in Sevastopol, said a referendum on the status would take place on March 16. All state property would be “nationalised”, the Russian rouble adopted and Ukrainian troops treated as occupiers and forced to surrender or leave, he said.

On the ground, a mission of 35 unarmed military observers from the pan-European Organisation for Security and Cooperation in Europe was stopped from entering Crimea by unidentified men in military fatigues when they travelled from the port of Odessa, Poland’s defence minister said.

In Brussels, European Council President Herman Van Rompuy outlined a three stage plan to try to resolve the crisis, while announcing that the EU would sign the political parts of a far reaching agreement with Ukraine before May 25 elections there, and offer the country extensive aid and trade benefits.

Unless Moscow opens negotiations with Ukraine and an international “contact group” soon, the EU would move to travel bans and asset freezes on Russian officials, and boycott a planned June Group of Eight summit in Olympic venue Sochi.

If Russia took action that destabilises Ukraine further, there would be “grave consequences” for bilateral economic ties, he said, without giving any deadlines. Poland’s prime minister said the EU talks on sanctions had been “stormy”, hinting at frustration at his inability to achieve stronger measures, which require a unanimous decision of all 28 member states.

Putin has cited threats to Russian citizens to justify military action in Ukraine, as he did in Georgia in 2008. Far from seeking a diplomatic way out of the present crisis, Putin appears to have chosen to create facts on the ground before the West can agree on more than token action against him.

Ukrainian Prime Minister Arseny Yatseniuk said after meeting EU leaders that Ukraine’s armed forces would act if Russian military intervention escalated any further into Ukrainian territory. “We are ready to protect our country,” he said.

Military experts say Kiev’s small and underequipped forces are no match for Moscow’s superpower might.

The U.S. Navy announced a guided-missile destroyer, the USS Truxton, was heading to the Black Sea in what it said was a long-planned training exercise and not a show of force

The EU said it had frozen the assets of ousted Ukrainian president Yanukovich and 17 other officials suspected of human rights violations and misuse of state funds.

International police agency Interpol said it was reviewing a request by Ukrainian authorities for it to issue a “red notice” for the arrest of Yanukovich on charges including abuse of power and murder.

As expected, the EU summit was unwilling to adopt more than symbolic measures against Russia, Europe’s biggest gas supplier, because neither industrial powerhouse Germany nor financial centre Britain is keen to trigger a trade war.

France has a deal to sell warships to Russia that it is so far not prepared to cancel, London’s banks have profited from facilitating Russian investment, and German companies have $22 billion invested in Russia.

The European Commission has announced aid of up to 11 billion euros ($15 billion) for Ukraine over the next couple of years provided it reaches a deal with the International Monetary Fund, entailing painful reforms like ending gas subsidies.

European Central Bank chief Mario Draghi said the crisis had already had a major impact on the Russian and Ukrainian economies, but little effect so far on the euro zone.

Russia kept the door ajar for more diplomacy on its own terms, announcing on Thursday a meeting of former Soviet states, including Ukraine, for April 4.

Lavrov said attempts by Western countries to take action over the Ukraine crisis via democracy watchdog OSCE and the NATO military alliance were not helpful.