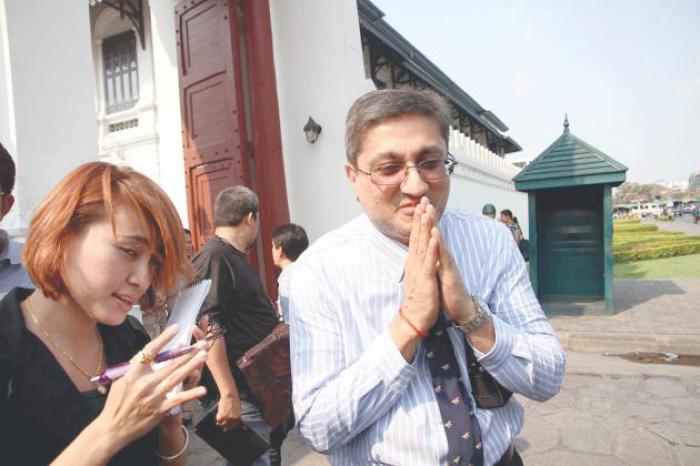 PHUKET: Attempts were under way yesterday to stall a deportation order against Indian-born businessman Satish Sehgal for joining the anti-government protests.

Satish, 70, yesterday petitioned His Majesty the King to intervene against the order by the government’s Centre for Maintaining Peace and Order (CMPO), which was signed on Wednesday by caretaker Labour Minister Chalerm Yoobamrung in his capacity as the CMPO director.

His lawyer would also seek a court injunction against the deportation order. Satish said he would need to rely on the court to ensure justice, adding “I believe in the Thai justice system.”

He has seven days to petition the Civil Court.

Thaworn Senneam, a leader of the anti-government People’s Democratic Reform Committee (PDRC), yesterday said that he was preparing to petition the Civil Court on whether the CMPO had violated a court order in seeking the deportation of Satish.

The court had earlier prohibited the CMPO from limiting the constitutional rights of the protesters.

Lawyer Sithichok Sricharoen said yesterday that Satish has the right to seek an injunction from the Civil Court against the deportation order.

Satish’s brother, Arthit Sehgal, yesterday represented him in filing the petition at the Grand Palace because he said he worried about his safety. The King has the power to grant royal pardons.

Chalerm said yesterday that he had signed the deportation order because Satish had confessed to the authorities that he was involved in the seizure of five state agencies, including the Department of Civil Aviation, in the early days of the anti-government protests organised by the PDRC.

He said the order, which was signed on Wednesday, would next be forwarded to the Immigration Bureau to carry out the deportation.

“I have no other choice because this decision was made by the relevant authorities. I hold no personal grudge against Satish. We don’t know each other,” Chalerm said.

On February 22, the Interior Ministry’s Immigration Commission resolved that Satish had violated the immigration law and therefore should be deported. The panel reversed its decision three days earlier that Satish had not committed any wrongdoing in this matter.

Yesterday, he went to the PDRC’s main protest site at Lumpini Park. “I am innocent and they should not have persecuted me. If I did anything wrong, I would have admitted to it,” he said.

Satish, a former chairman of the Thai-Indian Business Association, said he has lived in Thailand for 65 years. His family emigrated from India and his younger brothers were all born in Thailand and have citizenship, while Satish holds a permanent residency.

Other nations need to know the latest: Surapong
The Nation / Phuket Gazette

PHUKET: Caretaker Deputy Prime Minister and Foreign Minister Surapong Tovichakchaikul said he would brief foreign diplomats about the latest developments as the anti-government protesters are planning to use independent organisations and the judiciary to topple the caretaker government.

He said other countries needed to understand that the governments of Thaksin Shinawatra, Samak Sundaravej and Somchai Wongsawat had similarly been ousted by the same people who are now part of the People’s Democratic Reform Committee (PDRC).

“I will also write to United Nations Secretary-General Ban Ki-moon to tell him that there is a movement in Thailand that keeps toppling governments,” he said.

Meanwhile, he said, the Students and People’s Network for Thailand’s Reform (STR) rally at the Chinese Embassy yesterday would not change Beijing’s plan to buy the government rice stockpile. He went on to say that China and Thailand had good relations and that the Chinese government wanted to help Thai farmers.

He also called on Suthep Thaugsuban, the PDRC’s secretary-general, to tell the protesters not to spoil Thailand’s relations with China.

The STR rallied outside several foreign embassies yesterday, including those of the United States, Britain, France, Japan, Singapore, Australia and Russia, to urge them to help rid Thailand of corruption and restore democracy.

Separately, a pro-government group gathered in front of the National Anti-Corruption Commission offices yesterday demanding that it examine the assets of the six members of its committee and see if they were qualified and endorsed by His Majesty before taking up their position.

She was referring to findings from the latest survey by the Office of Non-Formal and Informal Education.

The survey also found that at least a million others had a very low level of literacy. People in this group could not use their reading, writing and arithmetic skills to answer questions, she said. “Some 1.1 million people aged between 15 and 59 years old are described as having a low level of literacy. They can use those skills to answer just a few questions,” Suthasri said.

So far, she said, the findings were from a preliminary survey only.

“We will need to develop standard tests to determine Thais’ literacy. Relevant authorities should consult the National Institute of Educational Testing Service,” she said.

PHUKET: Electronic monitoring (EM) will soon be used to keep track of young offenders who have been given suspended prison terms for misdemeanours, in order to give them a chance to rehabilitate themselves, a senior Bangkok North Municipal Court judge said yesterday.

For adult offenders, EM will be used in drunk-driving cases, while for young offenders it will be used in street-racing cases, said Surajit Sribunma. Those convicted of such offences will still undergo mandatory public service while wearing the EM devices to prevent them repeating the behaviour that led to their crimes, he added. Wearing EM devices on their ankles, convicted street racers will be prohibited from going out at night to take part in or watch races – most likely between 10pm and 4am – during a seven-day period. Drunk drivers will be discouraged from going out at night, to lower the likelihood of them driving home inebriated. There are 200 EM devices available for use by the Bangkok North Municipal Court, Surajit said.