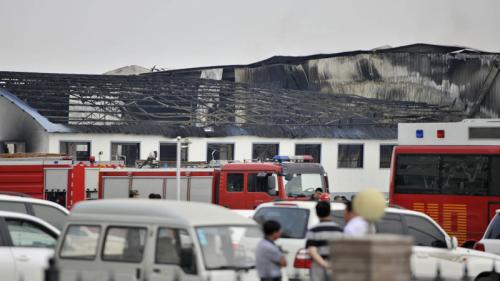 PHUKET: A blaze at a locked poultry slaughterhouse in northeast China killed at least 119 people on Monday with several still unaccounted for, officials and state media said, triggering online outrage in a country with a grim record on fire safety.

The fire broke out just after dawn near Dehui in Jilin province. The provincial government said it sent more than 500 fire-fighters and more than 270 doctors and nurses to the scene, evacuating 3,000 people living nearby as a precaution.

More than 300 workers were in the plant at the time, with employees reporting hearing a sudden bang and then seeing dark smoke, Xinhua state news agency said.

“About 100 workers have managed to escape from the plant whose gate was locked when the fire occurred,” Xinhua said.

“The complicated interior structure of the prefabricated house in which the fire broke out and the narrow exits have added difficulties to the rescue work.”

The exact number of people unaccounted for was unclear, as was the cause of the fire, Xinhua said. The Jilin government said 54 people were injured and had been rushed to hospital.

People took to social media sites to express their anger.

“Senior officials need to be sacked because of this,” wrote another.

Victims’ relatives gathered outside the building to “demand the government investigate and announce the cause of the accident as soon as possible”, Xinhua said.

Hong Kong’s Phoenix Television cited family members as saying that the doors were always kept locked during working hours during which workers were forbidden to leave and that the slaughterhouse never carried out fire drills.

China’s record is poor. Fire exits in factories are often locked or blocked and regulations can be easily skirted by bribing corrupt officials.

Pictures carried by state media showed smoke rising from a long, low-rise building, whose roof had been almost totally burned away, with fire engines and other rescue vehicles parked in front.

Jilin is a largely agricultural province and an important grower of corn and soy beans.

The slaughterhouse is owned by a small local feed and poultry producer called Jilin Baoyuanfeng Poultry Company, according to the government.

A fire at a nightclub in Shenzhen, just across the border from Hong Kong, killed 44 people in 2008. A senior policeman was jailed for taking bribes to allow the unlicensed venue to remain open.

One of modern China’s worst fire disasters occurred in late 2000, when fire engulfed building workers at a discotheque in a mall in the central city of Luoyang, killing 309.

The vast majority of deadly industrial accidents in China happen in the huge coal mining industry, in which more than 1,300 people died last year from explosions, mine cave-ins and floods.

PHUKET: Britain is considering holding talks with Ecuador over the future of Wikileaks founder Julian Assange, the Foreign Office said on Monday.

Assange, 41, took refuge in Ecuador’s tiny embassy in London last June to avoid extradition to Sweden, where he is wanted for questioning over sex assault and rape allegations. He denies the allegations.

A spokeswoman for the Foreign Office said it was considering a request made by Ecuador’s foreign minister Ricardo Patino to meet Foreign Secretary William Hague when Patino visits the country in mid-June.

“We’re considering that request. We hope the visit will contribute to our joint commitment to finding a diplomatic solution to this issue,” the Foreign Office said.

PHUKET: Local councils in Northern Ireland have painted fake shop fronts and covered derelict buildings with huge billboards to hide the economic hardship being felt in towns and villages near the golf resort where G8 leaders will meet this month.

Northern Ireland’s government has spent 2 million pounds tackling dereliction over the past two years, the province’s environment department said, demolishing some buildings and giving others a facelift in a bid to make areas more attractive.

Almost a quarter of so-called dereliction funds were freed up for local councillors in the county of Fermanagh in anticipation of Britain hosting the annual Group of Eight leaders summit there on June 17-18. More than 100 properties have been spruced up.

In the one-street town of Belcoo, the changes are merely cosmetic. At a former butcher’s shop, stickers applied to the windows show a packed meat counter and give the impression that business is booming.

Across the street, another empty unit has been given a makeover to look like a thriving office supply shop. Locals are unimpressed.

“The shop fronts are cosmetic surgery for serious wounds. They are looking after the banks instead of saving good businesses,” said Kevin Maguire, 62, an unemployed man who has lived all his life in Belcoo.

“Where would you see a shop front in Northern Ireland like this anyway? It’s more like something you’d find in Belgravia or Chelsea,” he said, referring to elite districts of London.

The fakes are not the first of their kind in Northern Ireland, a province recovering from three decades of sectarian violence that was largely ended by a peace deal 15 years ago.

Last year smart-looking shop fronts appeared in a series of derelict Belfast stores along the main route from the city centre to the grand Stormont parliament building.

“Northern Ireland is in the international spotlight so it is entirely right that we should portray it in the best light possible,” Northern Ireland Environment Minister Alex Attwood said in a statement.

“We should do everything we can to make these areas as attractive for residents, tourists and consumers. If we want tourists to visit and stay longer, then tackling major eyesores and dereliction will certainly help.”

Although partly shielded from the economic crisis in the Republic of Ireland thanks to an annual grant from London that accounts for about half of public sector spending, the North has been hit hard by the downturn. Even the luxury five-star hotel where G8 leaders will meet in two weeks’ time has been in receivership since 2011.

In Belcoo, some wonder what will happen to the new shop fronts once Barack Obama and other world leaders have left.

“In six months’ time how are these shops going to look?” asked Jim Leonard, a 50-year-old unemployed bricklayer.

“They’ll just be pieces of paper blowing around the ground.”

PHUKET: The death toll from Friday’s tornadoes and storms in Oklahoma has risen to 18 people, including six children and 12 adults, the Oklahoma chief medical examiner said on Monday.