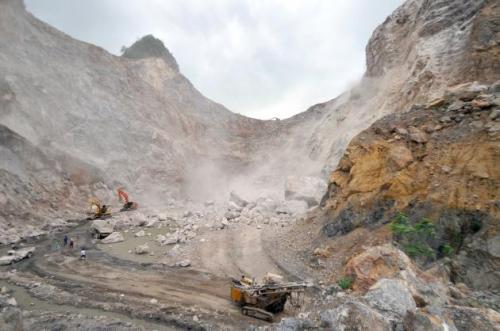 
Phetchaburi mine ‘may have been operating illegally’
The Nation / Phuket Gazette
PHUKET: Rescue workers continued to search for the bodies of victims in a fatal rockslide yesterday at a mine in Phetchaburi, south of Bangkok, which authorities say may have ignored an order to improve its work methods for months.
The rockslide instantly killed backhoe driver Suwichart Suwinya. Two Myanmar workers, known simply as Nai and Yoo, were missing after the accident and feared dead.

Phetchaburi Governor Montien Thongnit has declared the mine a disaster zone and neighbouring areas a risky zone.

The mine was ordered to suspend all operations until inspections confirm that it is safe to resume work at the site.

Khao Yoi district chief Wisa Poonsirirat was ordered to head a search to try to locate the bodies of the two missing victims.

“This is the urgent mission,” Montien said.

Phet Samut mine owner Wichai Laowanichwisit said he was sorry for the tragic incident. He said his company would pay the medical bills of victims and offer compensation to the families of those killed.

Montien said he had also assigned Phetchaburi’s disaster-prevention and mitigation office to see how to provide further assistance to the victims.

Meanwhile, the head of the Primary Industries and Mines Region 7 Office said the mine was instructed to improve its mining method several months ago.

“Its method is not the right one,” Somsak Huankrasin said.

He suspected the mine may have ignored the problem until the fatal accident yesterday.

“We will look into whether negligence led workers to work in unsafe circumstances,” Somsak said.

“We suspect that 5,832 luxury cars have been registered illegitimately in a way that allows buyers to avoid paying taxes,” DSI chief Tarit Pengdith said yesterday.

The probe was sparked by last week’s mysterious fire that damaged four sportscars on a car transport trailer in Nakhon Ratchisima. No owners have stepped forward to claim ownership of the vehicles, which were on their way to Si Sa Ket province.

Even the owner of the trailer truck’s company told police she did not know who owned the cars or who paid for their transport.

The DSI has now taken over the case.

Tarit said the case implicates at least 18 suspects, including customs, revenue, excise and land-transport officials. The DSI had been monitoring cases of “suspicious” luxury cars for a few years already, he revealed.

Veteran politician Chaiya Sasomsap said yesterday a white Lamborghini gutted in last week’s fire had the same licence-plate number registered to a white Lamborghini owned by a nephew, who is a son of Labour Minister Phadermchai Sasomsap, an senior Pheu Thai MP.

Speaking in an interview with a cable news channel, the former public health minister said his unnamed nephew returned the plate to the Land Transport Department in 2006 after he got another plate number. “The change was registered and documented in the department’s documents, signed by the officials. I don’t know why this licence plate was found at the scene of the fire,” said Chaiya said.

His nephew was still driving his white Lamborghini. He invitede police to verify his statement, the registration details and the existence of the vehicle.

Phadermchai said the Lamborghini gutted in the fire was not his son’s, although it carried his son’s old licence plate number 2617. “Maybe the auto trade company that sold a white Lamborghini to my son has not changed registration details of him still owning it. It does not carry licence-plate number 2617 anymore,” he said.

Tarit said the white Lamborghini damaged in the fire had been on a DSI watchlist. It was among the more than

1,000 vehicles awaiting registration or registered after being imported as auto parts and re-assembled for the purpose of tax evasion.

Tarit identified Dhamma Motor Rich Co Ltd, operated by Pornpimon Kehathan, as the firm that registered the white Lamborghini. Its engine buyer was Sukanya Sombatdee, he said, while the importing firm was TAN Express.

Tarit said evidence did not yet lead to any specific politician.

However, a politician might be implicated given that luxury-car buyers in Thailand are usually politicians or wealthy businessmen, he said.

The intention of buyers would determine whether they would be |held responsible for tax-evasion, Tarit said.

“But most of the time, we have found that buyers usually know where the vehicles come from,” he said.

The chief of the Land Transport Department in Si Sa Ket was transferred to an inactive post yesterday. No detailed reasons were given for the swift transfer order, which reportedly came as a result of the issue.

The official, Danai Khote-arsa, said he took the post just seven months ago, and that his office had registered just seven vehicles, all of which were |legally imported.

The Industrial Works Department estimates that there are around 3,000 luxury cars imported illegally through the auto-parts scheme.

Only 10 of them are registered with the department, as required by their petrol tank exceeding 15 litres, said director-general Natthaphol Natthasomboon. He said he would visit Land Transport offices in the Northeast to check on registration details and seek relevant information from the officials and the police.

Technology Crime Suppression Division (TCSD) chief Pol Maj-General Pisit Pao-in said his agency would make structural changes in the next seven days in which it would increase the number of sub-divisions from seven to 12 and boost the number of officers and tools to monitor cyber threats. The TCSC currently has 120 officers.

The agency will set up a “war room” where 20 officers would each monitor one screen around the clock to keep an eye on social media. Currently, only two officers are assigned to this duty.

The TCSC’s moves are in response to national polic