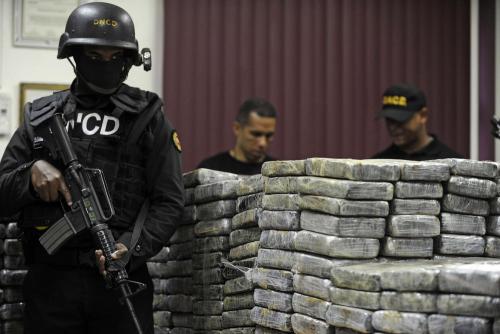 About 14 percent of U.S.-bound cocaine shipments – roughly 42 tons – was trafficked through the Caribbean in the first six months of this year, and Puerto Rico and the neighbouring Dominican Republic are emerging as hubs of the burgeoning trade, according to the U.S. Drug Enforcement Administration.

That was double the share of U.S.-bound cocaine that was shipped through the region during the first half of 2012, Vito Guarino, special agent in charge of the DEA’s Caribbean division, told Reuters.

He said the increase – which came amid a 30 percent overall drop in the amount of cocaine smuggled into the United States over the same time period – was at least partly due to increased drug interdiction efforts along the U.S.-Mexico border.

But Colombian-led traffickers are also simply taking advantage of a region where they made deep inroads in the 1980s, before drug lords in Mexico began to dominate the trade by the late 1990s.

In the last year, U.S. law enforcement agencies have turned up the pressure on the Caribbean traffickers, with more Coast Guard patrols, as well as well as human and electronic intelligence, to detect illicit planes and boats.

Guarino said the DEA’s drug flow estimates were based on seizures and arrests – which offer only a partial indicator. But while experts have been predicting an uptick in Caribbean trafficking for years now, Guarino said the evidence of an escalation was now unmistakable.

Most cocaine shipments into the region are smuggled aboard drug-laden speed boats, with two or more big engines, that roar across from the northern tip of South America in one or two days, Guarino said, often under cover of darkness. Bales of cocaine are off-loaded to fishing boats or transferred to vehicles on deserted beaches.

In August, a U.S. Customs and Border Protection aircraft spotted a 30-foot long, go-fast boat near Puerto Rico loaded with 1,500 lbs (680 kg) of cocaine in waterproof bales. The boat, its three-man crew, and its cargo were seized by a British navy frigate, HMS Lancaster, patrolling in the area.

The lure of Puerto Rico is its status as a U.S. territory. Once drugs are smuggled onto the island they can head right to the U.S. mainland without going through customs.

Based in Puerto Rico, Guarino, a former Newark cop, began his career with the DEA in Miami in 1985. That was during the heyday of the Colombian cartels and so-called “Cocaine Cowboys,” when Miami’s role as an epicentre for the cocaine trade turned it into one of the most dangerous cities in the United States.

About 500 lbs (225 kg) of coca paste, the raw ingredient for refined cocaine, was recently seized from a laboratory on a ranch on the outskirts of the Dominican capital.

Dominican authorities said it was the first full-scale cocaine processing operation ever uncovered in the Caribbean. Cocaine lab refining is usually done in South America, before the final product is shipped in bulk.

The similarities between Miami in the 1980s and Puerto Rico and the Dominican Republic today are striking, Guarino added.

“The Cocaine Cowboys, the Uzis, the shootouts that we used to have … You’re seeing the same violence,” Guarino said.

In 2011, Puerto Rico set a new record with 1,117 killings. The homicide rate was more than six times the rate on the U.S. mainland and the government said almost half the murders were drug related. The crime rate has since fallen, but still remains three times higher than on the mainland.

Highlighting Puerto Rico’s role as a magnet for the drug trade, federal and local law enforcement authorities on the island announced the take-down earlier this month of one of the most powerful drug gangs to operate in the Caribbean over the last 20 years.

One of those arrested in the bust was Edgar Collazo Rivera, a prominent Puerto Rico businessman who operated shipping and garbage companies and had contracts with municipal governments. His $8 million, 61-foot (18.5-meter) yacht “Olga” was allegedly used to transport cash to the Dominican Republic to buy drugs, according to authorities.

But the State Department said it would not cut off all aid and would continue military support for counterterrorism, counter-proliferation and security in the Sinai Peninsula, which borders U.S. ally Israel.

It also said it would continue to provide funding that benefits the Egyptian people in such areas as education, health and the development of the private sector.

The split decision illustrates the U.S. dilemma in Egypt: a desire to promote democracy and human rights along with a need to cooperate with a nation of strategic importance because of its control of the Suez Canal, its 1979 peace treaty with Israel and its status as the most populous nation in the Arab world.

“We will … continue to hold the delivery of certain large-scale military systems and cash assistance to the government pending credible progress toward an inclusive, democratically elected civilian government through free and fair elections,” State Department spokeswoman Jen Psaki said in a statement.

The military-backed authorities have cracked down hard on the Brotherhood since ousting Mursi. On August 14, security forces smashed two pro-Mursi sit-ins in Cairo, with hundreds of deaths, and then declared a state of emergency and imposed a curfew. Many of the Brotherhood’s leaders have been arrested since.

Jon Alterman, director of the Middle East program at the Center for Strategic and International Studies think tank in Washington, said it was doubtful Washington would gain any leverage over Cairo by withholding the aid.

“It may make some Americans feel better about the U.S. role in the world, but it’s hard to imagine how it changes how the Egyptian government behaves,” he said.