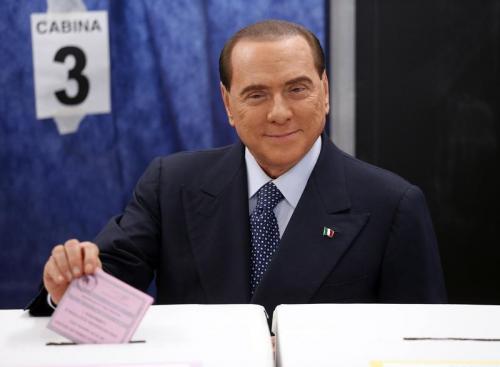 
Italian politics in crisis after Berlusconi pulls support
Reuters / Phuket Gazette
PHUKET: Silvio Berlusconi’s bid to push Italy into new elections faces a test on Monday when he meets lawmakers from his centre-right party who have shown growing unease over his shock decision to pull support from Prime Minister Enrico Letta’s coalition.

Berlusconi’s decision to order the five ministers from his People of Freedom (PDL) party to resign from Letta’s cabinet has plunged Italy into political chaos and left the euro zone’s third-largest economy without a functioning government.

Financial markets, which have been increasingly nervous about Italy after a week of rising political tensions, are expected to sell off government bonds and stocks on Monday, adding to the atmosphere of crisis.

Letta will go before parliament to seek support to continue in a confidence vote, probably on Wednesday, leaving two days of manoeuvering among the parties, starting with a meeting between Berlusconi and PDL parliamentarians on Monday afternoon.

The billionaire media tycoon, who is fighting moves to expel him from parliament following his conviction for tax fraud last month, said at the weekend he wanted elections as soon as possible.

But he faces resistance not just from President Giorgio Napolitano, who would have to order parliament to be dissolved, but also from his own increasingly fractious supporters, some of whom may switch allegiance and back Letta’s government.

All five of the ministers ordered to resign on Saturday complied but made statements expressing reservations or even outright disagreement with the decision, prompting Letta to hope that he may be able to win over centre-right dissenters.

Speaking on RAI state television late on Sunday, he said the PDL ministers appeared to be at odds with Berlusconi and the parliamentary party, split between hardline “hawks” and more moderate “doves” also seemed uncertain.

“I hope that there is a part of the PDL which is not in accord with Berlusconi,” he said.

Letta enjoys a commanding majority in the lower house but would need to win over a couple of dozen senators from the PDL or opposition parties including the anti-establishment 5-Star Movement to be able to be sure of parliamentary support.

Letta’s unwieldy coalition government of traditional rivals from the left and right has struggled ever since it was formed after last February’s deadlocked elections which left no party with the numbers in parliament to govern alone.

But with opinion polls roughly balanced between Letta’s centre-left Democratic Party and the PDL there is no enthusiasm for a return to the polls under the current voting system, which most analysts believe would simply produce more stalemate.

Berlusconi’s conviction for tax fraud and subsequent moves to strip him of his seat in the Senate have exacerbated the tensions, which came to a head last week when PDL parliamentarians threatened to resign over his legal battle.

A special Senate committee meeting on October 4 is expected to vote to open proceedings that could lead to Berlusconi being thrown out of parliament by mid-October.

The former premier, who celebrated his 77th birthday on Sunday, brushed off talk of breakaways from the PDL and told a programme on his own Italia Uno channel that he did not believe that a government backed by “traitors” could survive.

“We’ll decide our line tomorrow and I don’t believe anyone or anything will divide us,” he said.

With Italy falling behind in its efforts to bring the budget deficit under European Union limits and youth unemployment running at nearly 40 percent, the prolonged wrangling between the parties has blocked efforts to reform the economy, after two years of recession.

On Friday, cabinet unity collapsed after ministers failed to agree on a vital package of budget measures to cut the deficit below the EU limit of 3 percent of gross domestic product and fund measures to halt an increase in sales tax to 22 percent from 21 percent.

Berlusconi seized on the sales tax issue to pull out of the government, saying Letta had reneged on a deal to prevent the increase from coming into effect, a charge the prime minister described on Saturday as a “huge lie”.


At least 16 dead as Syrian school hit in air strike
Reuters / Phuket Gazette
PHUKET: At least 16 people, most of them students, were killed in an air strike that hit a secondary school in the rebel-held Syrian city of Raqqa on Sunday, activists said.

Fighting continued across the country including in the outskirts of the capital, underlining the relentless nature of the civil war in the face of international efforts to destroy Syria’s chemical arms and revive peace talks.

Raqqa in northeastern Syria has been under the control of insurgents fighting to oust President Bashar al-Assad since March but the city has been regularly bombed by government forces.

Videos posted online by activists showed the bloody and charred remains of bodies said to have been from the air strike in Raqqa. Some of the victims appeared to be young men, possibly in their teens.

The British-based Syrian Observatory for Human Rights, a monitoring group with a network of sources across the country, said the death toll was at least 16 – 10 of them students at the school – but that the number was likely to rise because some people were critically wounded.

Fighting also continued in the southern Deraa province, a day after rebels in that area – including the al Qaeda-linked Nusra Front – seized a former customs post on the southern border with Jordan.

On the outskirts of the capital, an attack by rebels on military bases in the Qalamoun area killed at least 19 government fighters and wounded dozens of others Late on Saturday, the Observatory said.

The death toll from a car bomb on Friday in the town of Rankus north of Damascus also rose to 34, the Observatory added.

More than 100,000 people have been killed in Syria’s conflict, which started as a peaceful uprising in March 2011 and turned into a civil war after a violent government crackdown on civilian demonstrators.

The U.N. Security Council adopted a resolution on Friday that demands the eradication of Syria’s chemical weapons, following an August 21 sarin nerve gas attack on a Damascus suburb that killed hundreds.

U.N. Secretary-General Ban Ki-moon said after the vote that big powers hoped to hold a peace conference on Syria in mid-November in Geneva.

The international envoy for Syria, Lakhdar Brahimi, said on Sunday that date was “not 100 percent certain” and urged Syria’s fractious opposition groups to unify behind one delegation at the planned meeting.

“If there are different delegations, I worry that this will lead to failure, not success,” he told the al-Arabiya news channel.


Gunmen slay students as they sleep in Nigerian college
Reuters / Phuket Gazette
PHUKET: Suspected Islamist militants stormed a college in northeastern Nigeria and shot dead around 40 male students, some of them while they slept ea

Phuket Gazette World News: US shutdown with no end in sight