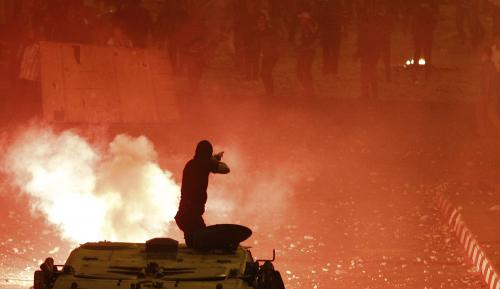 PHUKET: At least 51 people were killed in clashes in Egyptian cities on Sunday, security sources said, after opponents and supporters of deposed president Mohamad Mursi took to the streets in one of the bloodiest days since the army seized power.

In a sign of more possible violence to come, an alliance including Mursi’s Muslim Brotherhood urged Egyptians to protest from Tuesday and gather on Cairo’s Tahrir Square on Friday, declaring: “No one will stop us from (Tahrir) no matter what the sacrifices”.

Egypt has been gripped by turmoil since the army ousted Mursi on July 3 after mass protests against his rule, prompting his Muslim Brotherhood to demonstrate in the streets.

On August 14, the military-backed authorities smashed two pro-Mursi sit-ins in Cairo, with hundreds of deaths, and then declared a state of emergency and imposed a curfew. Many of the Brotherhood’s leaders have been arrested since.

At Ibn Sina hospital in the Mohandiseen district of Cairo, a Reuters reporter saw eight bodies shrouded in blue and white sheets among pools of blood.

“The Interior Ministry and the army killed my son,” screamed Sabah el-Sayed, mother of Rami Imam, 29, stroking his leg. Imam’s father said his son had been heading home from work when he got caught up in the clashes.

Abdelrahman al-Tantawi, a medic who brought Imam to the hospital, said he had seen police and army firing from a bridge at pro-Brotherhood demonstrators.

He said Imam had a bullet wound in his back. Reuters could not independently verify that account.

Authorities had warned on Saturday that anyone who protested against the army during ceremonies marking the anniversary of an attack on Israeli forces during the 1973 war would be regarded as an agent of foreign powers, not an activist.

The Interior Ministry, which said it had arrested 423 people, described the clashes as an attempt by the Muslim Brotherhood to “ruin the celebrations and cause friction with the masses”. Scores of people were reported wounded.

In a speech at a late night ceremony, army chief General Abdel Fattah al-Sisi, the man who toppled Mursi, said: There are a lot of people who think Egypt’s army can be broken. Egypt’s army is like a pyramid but it is a pyramid because the people of Egypt support it.”

Protesters had been heading towards Tahrir Square, the rallying point for the popular uprising that toppled autocrat Hosni Mubarak in 2011, security sources said.

The military often accuses the Brotherhood of inciting violence during protests, accusations it denies.

The state news agency reported that during clashes in the Nile Delta province of Qulubiya, authorities arrested 25 members of the Brotherhood who had 51 hand grenades.

A Brotherhood member was killed and at least two were wounded when marchers clashed with police in the town of Delga, 300 km (190 miles) south of Cairo, security and medical sources said.

The Brotherhood says it is opposed to the violent methods of other Islamist groups. Attacks by militants on police and soldiers in the Sinai Peninsula have increased sharply since Mursi was toppled.

Fears are growing that an Islamist insurgency will take hold outside Sinai in other parts of Egypt. A Sinai-based militant group inspired by al Qaeda said it tried to kill the interior minister in a suicide bombing in Cairo last month.

Protesters chanted “The coup is terrorism” and “Sisi is a killer”.

The Brotherhood’s political wing, the Freedom and Justice Party, said it held Sisi and the Interior Ministry responsible for Sunday’s deaths.

“We call on all human rights organizations to condemn the crimes committed today. We call for an international investigation into the crimes of today,” it said in a statement.

Cairo’s Dokki district was littered with rocks and thick with tear gas. Security forces fired into the air in the capital and Egypt’s second city, Alexandria, witnesses said.

Thousands of members of the Brotherhood, which was recently banned, reached within five city blocks of Tahrir Square – the rallying point for protesters during the revolt that toppled Mubarak.

Police fired tear gas and beat protesters to keep them away from the square, where people were gathering for the celebrations to commemorate the 1973 fighting.

Fighter jets roared overhead and military helicopters trailed Egyptian flags, as they did during the unrest that led to Mursi’s overthrow.

Sisi has promised a political road map would bring free and fair elections and stability to Egypt. The Muslim Brotherhood has rejected the political transition plan, saying the army-backed government installed by Sisi is illegitimate.

The Brotherhood, Egypt’s oldest and most influential Islamist group, won every election after Mubarak’s fall but grew increasingly unpopular during Mursi’s rule. Many Egyptians accused him of trying to acquire sweeping powers and mismanaging the economy. He denied the accusations.

The Brotherhood accuses the army of sabotaging democracy by ousting Mursi, the first freely-elected president in Egypt, a U.S. ally which has a peace treaty with Israel and controls the Suez Canal, a vital global trade route.

The military says it was responding to the will of the people. “We are answerable to God and to you Egyptians for the mandate (by the) Egyptian people towards the army and police to preserve Egypt,” said Sisi.