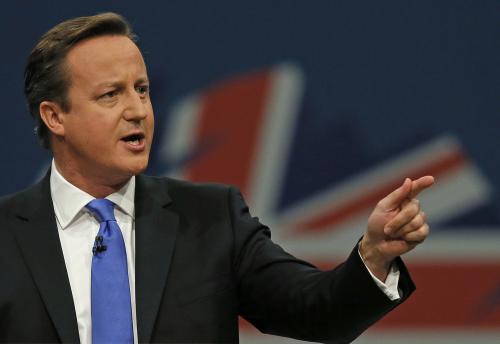 PHUKET: British Prime Minister David Cameron’s control over his own party looks set to be challenged after a rebel lawmaker on Sunday launched a campaign to bring forward a planned referendum on European Union membership to next year.

The move sets up a parliamentary showdown between rival factions of the Conservative Party in November that could re-open divisions Cameron tried to heal earlier this year.

To pacify rebellious eurosceptics in his party and help win back the support of voters lost to anti-EU rivals ahead of a 2015 election, Cameron in May supported draft legislation promising a referendum on EU membership by the end of 2017.

But on Sunday, Conservative MP Adam Afriyie said the promise was not enough and put forward his own proposal to bring a vote forward to October 2014.

“It’s in our national interest to resolve this issue as soon as possible to create the certainty and stability our country needs for the future,” Afriyie wrote in the Mail on Sunday.

“The fact is, the British people are not convinced there will be a referendum at all if we wait until after the next general election. So many things can change.”

Cameron’s office insisted the proposal would not be allowed to pass.

But the row highlights long-standing party fractures over Europe which contributed to the downfall of former prime ministers Margaret Thatcher and John Major and still pose a risk to Cameron.

The legislation currently under discussion is seen by some as merely symbolic because it could not bind future governments. Afriyie’s proposal, which takes the form of an amendment to that draft law, could be debated in parliament on November 8.

Labour Party spokesman Michael Dugher said the proposal showed Cameron was “too weak and out of touch” to stop infighting in his party.

Afriyie said he had support from some lawmakers in each of Britain’s three main parties, but interior minister Theresa May indicated there would be no government backing for his proposal.

Cameron is seeking radical changes to Britain’s role in the European Union, which he says has become too bureaucratic and anti-competitive, to win over voters who might be tempted to back the anti-EU UK Independence Party (UKIP).

The Conservatives trailed Labour by five percentage points in poll results published on Sunday. The polls showed UKIP, which has no representatives in the current parliament, on 15 and 13 percent.