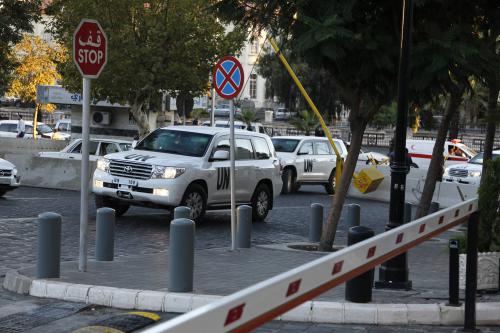 PHUKET: International experts began overseeing the destruction of Syria’s chemical weapons arsenal on Sunday, said an official from the mission that has averted a U.S. strike but could rob President Bashar al-Assad of his most feared weapon.

The process is being conducted amid a civil war in which 120,000 people have been killed, fragmenting Syria along sectarian and ethnic lines and drawing in Iran and Hezbollah on the side of Assad and his Alawite minority and Arab Sunni powers on the side of the mostly Sunni Muslim rebels.

The official, a member of a joint team from the Organization for the Prohibition of Chemical Weapons (OPCW) in The Hague and the United Nations, said Syrian forces used cutting torches and angle grinders to begin “destroying munitions such as missile warheads and aerial bombs and disabling mobile and static mixing and filling units”.

“Let it be clear that it is the Syrians who do the actual destroying while we monitor, observe, verify and report,” he said.

Witnesses said the experts, who arrived on Tuesday, left their Damascus hotel in the early hours of Sunday to begin their work in an undisclosed location.

The mission, which the United States hammered out with Russia after an August 21 chemical weapons attack in Damascus prompted U.S. threats of air strikes against Assad’s forces, is expected to continue until at least mid-2014.

Even without his chemical weapons arsenal, Assad’s air power and better-equipped ground forces would still hold a significant advantage over the rebels, who remain divided, with large numbers joining hardline Islamist brigades.

On the ground, the war has largely settled into a stalemate, with Assad seeking to tighten his grip on the centre of the country, the coast, areas along the country’s main north-south highway, routes to Lebanon and Iraq, and Damascus, scene of the August 21 sarin gas attack.

Assad’s government and the rebels blame each other for the attack in Sunni Muslim suburbs of the capital that killed hundreds of people.

The United States and other Western countries say a report by U.N. investigators indirectly implicates government-allied forces for the attack.

The U.N. Security Council adopted a resolution last week that demands the eradication of Syria’s chemical weapons and endorses a plan for a political transition in Syria.

The West is pushing, along with Russia, for the convening of a conference to nudge Assad and his foes towards a settlement to the conflict, the bloodiest of the “Arab Spring” revolts against entrenched autocrats.

But Assad told a German magazine he would not negotiate with rebels until they laid down their arms, and said his most powerful ally Russia supported his government more than ever.

He said he did not believe it was possible to solve the conflict through negotiations with the rebels.

“In my view, a political opposition does not carry weapons. If someone drops his weapons and wants to return to daily life, then we can discuss it,” he was quoted as saying by Der Spiegel.

The opposition insists on a peace conference producing a transitional government with full powers that excludes Assad and his lieutenants, and the U.N.’s Syria peace envoy Lakhdar Brahimi said on Sunday it was not certain that peace talks would take place in mid-November in Geneva as planned.

Heavy fighting between rebels and loyalist forces was reported in the northern Syrian city of Aleppo, once the country’s industrial and commercial hub.

In the coastal province of Tartous, loyalist Alawite and Christian militia surrounded al-Mitras, a rebellious Sunni village inhabited by members of Syria’s small Turkmen community, which has been generally supportive of the revolt against four decades of Assad family rule.

The Syrian Observatory of Human Rights, a monitoring group based in the UK and headed by opposition activist Rami Abdulrahman, said eight people were killed defending al-Mitras and warned of a massacre if the village were overrun.